Court of Appeals to Military: Stop dragging your anchor re DADT 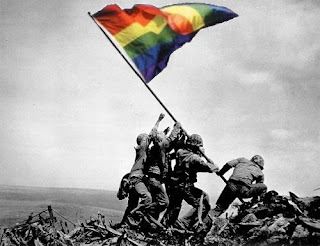 
A three-judge panel on the U.S. Court of Appeals for the 9th Circuit ordered the Pentagonon Wednesday to cease investigations and discharges of service members in violation of the ban on gays serving openly in the military. The ruling noted that the Obama administration has said it thinks another federal law — the Defense of Marriage Act, which prohibits federal recognition of same-sex marriages — is unconstitutional.
The Defense Department will comply with the court order and took steps late Wednesday to begin informing the forces of the change, according to Marine Col. Dave Lapan, a Pentagon spokesman.
The law requires every man and woman serving in military uniform to complete training courses about the end of the policy before its repeal. Military officials said President Obama will certify “in the coming weeks” that the military has completed the training courses and is ready to end the ban. 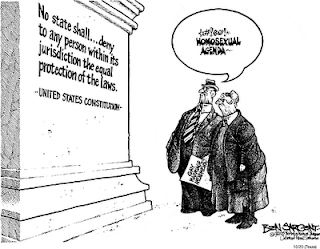 The “don’t ask, don’t tell” policy, which began in late 1993, will officially end 60 days after Obama’s written certification.
Some gay troops serving on the front lines said Thursday that military culture — not a court order — would dictate whether they eventually reveal their sexual orientation.
“I’m ecstatic,” said one soldier stationed in Baghdad, adding that he planned to meet Thursday night at a military coffee shop with other gay soldiers to celebrate.
“We won’t be loud or obnoxious, but we will show solidarity and resolve,” the soldier said by e-mail, speaking on the condition of anonymity while the ban remains in effect.
An Army officer based in Kabul said that he and his gay comrades were unlikely to publicly disclose their sexual orientation immediately — whenever the ban ends. “I’d like to, but that’s difficult because of the culture around me,” he said in an interview. Complicating the decision, he said, he has heard fellow soldiers and commanding officers use gay slurs and make gay jokes.
“I don’t know who will be accepting,” he said. Even if the ban ends quickly, “military culture won’t change overnight.”1
The military was taking it;s sweet time to enact the repeal of DADT, it was a stalling tactic, and      the gay community was advised to refrain from going public while in this transition time. Unless or until the policy was officially in place, gay service members remained at risk of being kicked out for coming out publicly.
It was a lame & spineless policy to begin with, asking soldiers to perform Duty & Honor for their country, while requiring them to lie about themselves & who they are.
Duty, Honor & Lies was a horrible policy & glad to see the courts calling BS on the stalling.
Posted by Fran at 6:36 AM