This editorial appeared in our local rag:


Too much focus on flubs

Published: (Friday, Jul 1, 2011 05:01AM)Midnight, July 1
In today’s age of electronic sound bites and instant analysis, it’s become easy — too easy — for people who are in the public eye to misspeak and get caught doing it. Politicians and elected leaders have proven to be particularly vulnerable.
During his 2008 campaign, President Obama was caught on camera in Beaverton saying that his campaign for president had taken him to “57 states,” not including Alaska and Hawaii.
More recently, former GOP vice presidential nominee Sarah Palin and announced Republican presidential candidate Michele Bachmann have been ridiculed by news media and political opponents for off-the-mark comments they made while on camera.
Most people have no problem with seeing politicians held up to ridicule when they commit a gaffe. The mistakes provide fodder for the late-night talk shows on TV, newspaper copy that’s often fun to read, and material for the cable news outlets to mine for their seemingly endless hours of often provocative programming.
But sometimes enough is enough. The news media generally have become so obsessed with publishing, broadcasting or cablecasting the verbal missteps of celebrities and political figures that one begins to wonder what important news is being missed. Sometimes, as happened when the news media jumped on Palin’s recent ad-lib about Paul Revere riding to warn the British, the coverage of the minutiae can overwhelm the more substantive information that’s being reported.
Bachmann recently has supplanted Palin as a favored media target. The conservative, straight-talking wife and mother currently represents Minnesota’s 6th Congressional District and has become known for assertions that are sometimes wide of the mark. An Associated Press analysis of some of her misquotes and misstatements of fact referred to them as “bomblets.”
Appearing on ABC-TV’s “Good Morning America,” Bachmann incorrectly referred to John Quincy Adams, our sixth president, as one of the Founding Fathers. John Quincy, of course, was the son of a Founding Father, John Adams, who became our second president.
Misstatements like that, if based on fatigue or confusion or just a lack of preparedness, can be forgiven; ones based on lack of intelligence or simple ignorance are much harder to forgive.
It would be nice, though, if the media hounds would take a step back and refocus on what’s really important in covering in the news, and presidential politics in particular. American voters deserve to have some meat and potatoes served up with the occasional bonbons.
~~~~~~~~~~~~~~~~~~~~~~~~~~~~~~~~~~~~
This editorial tells us we should not be scrutinizing politicians about "gaffes". To me, it was the same as saying we should "dumb down" for presidential candidates.


So what if Palin totally botched the Paul Revere historical event? Then went out to defend herself, insisting that she got it right.
What of Bachmann mixing up which Adams family member was a founding father?
It does matter. It is a sampler of the very lack of substance of their campaigns. They gloss over & make up historic details, winking & announcing how "god told them" to run for president or not. While Bachmann's grandstanding announcement of her candidacy made reference to John Wayne Gacy, the serial killer, rather than the hometown of John Wayne the actor, it is true we examine "where her head is at", rather than the fact her & her husband are some hateful fundamentalists, homophobes, and they have no problem taking over half a million dollars in Federal welfare, for the family farm & clinic business, while spouting off the Tea Party rhetoric saying Federal give aways & welfare are bad. Do as she says, not as she does.
And although candidates are (allegedly) human & can make mistakes, to give wrong & fabricated fractured fairy tale versions of history is like the ebonics of history.
It insults our intelligence.
If they make a mistake they should cop to it, and rather than this editorial, advising us to lower the bar, and accept all kinds of inaccurate and rhetorical garbage, we should be looking for candidates who have their facts together, or at least have the sense to shut up.
The last president people felt like they could "have a beer with" turned out to be a disaster of epic proportions.
We need to raise, rather than lower the bar for presidential standards.
Talking with god & botching historical facts is hardly a platform in which to build a candidacy.
Here is the clincher, as far as I am concerned-- they tell us to back off of the gaffes, and pay more attention to the substantive content of their message. Apparently whomever wrote that editorial has not been paying attention. 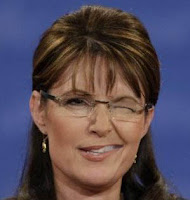 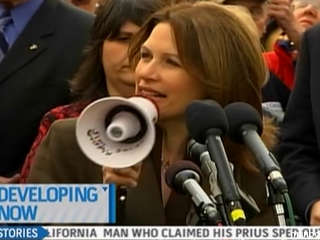 For people like Palin (who is waiting for god to tell her if she should run), and Bachmann (god already told her to run).... gaffes and flubs ARE their substance- that's all they've got.
Posted by Fran at 11:54 PM

I'm not making this up.

She's a "target" because she's a moron and an example of what is wrong with politics today.

And don't get me started on her closet queen husband who advocates conversion therapy to fix "teh gays."

it's not just the gaffes, but the way they handle them afterwards. that's when you get a glimpse into the real character of a person. in the case of batshit bachmann or princess sarah, they refuse to acknowledge that they screwed up. instead of owning up to their flubs in good humor, they double down. do we really want another president who, despite all the evidence to the contrary, insists that s/he is correct (lookin' at you, chimpy)? i don't think so.

Christopher~ Actually, many of the founding fathers HAD slaves!

But Bachmann favors abolishing minimum wage & all those pesky rules & regulations for employers.

So in s sense, she;d like to bring us back to slavery-- so employers can pay a buck an hour & more more profit. That's her "plan" to stimulate the economy!

Not only would workers rights go away, but environmental protection laws would likely be removed. More people living in poverty, in a toxic environment, so enjoyed by the profiteers.

That's her vision for the future!

Both her & Palin are rabid fundamentalists with those hateful agendas, all the while smiling & winking like Stepford wives.

Nonnie~ Exactly! Not only do they not own the flubs, but they keep them coming- so that the majority of what they say falls into the flub category.

Oh! Adding to the flub list-- Tom Petty issued a cease & desist order for Bachmann to stop using his song "American Girl" for her campaign without his permission.
She played it at the end of her announcement to run for pres.

I wish she would cease & desist her presidential run!

The type of gaffes they make shows a vast lack of knowledge of history. Gaffes like President Obama, when he was a candidate, saying that he'd gone to all 57 states, now that's a silly gaffe that really is meaningless, obviously due to misspeaking and being tired. But these people seriously don't know history, and that is the part to be concerned about.