A memo to Dick

The phone rang here at the Ramblings household tonight. It was a pre recorded message from Dick Morris. Some schpeal about how Obama rang up $14 trillion in debt, his socialist blah blah blah blah......

My immediate thought was to hang up. But then I thought, no I'll play along.
So there was an invite of sorts for "like minded conservatives, and the tea party" to join together, grab our torches & pitchforks and run that #@#$ #%@ socialist Obama out of office!

Obviously, they failed to check that I have been a registered democrat pretty much all my life, except for the little stint as an Independent.

Anyhoo... after the pre recorded tirade ended, he went on to say he wrote a book that is the best book and I should buy his book to learn more. The likelihood of that happening is when hell freezes over.

But after Dicks pre recorded tantrum, I was asked to hold, while a real human would then come on the line.
It was the monotone voice of a young sounding woman, who was required to read a similar rant about getting rid of this socialist pig in office, and would I join in Dick's campaign, and potentially get a free copy of Dick's book for doing so. (Is that a threat??)


Dick fails to leave much to our imaginations. I mean what do you think the book titled
" Revolt! How to Defeat Obama and Repeal His Socialist Programs" is about?
He could just call it "How to get Tea Party Nut Jobs to part with their money".

I mean seriously, is there any progressive, thinking Obama is an over-the-top, far left liberal?
He is a "middle conservative" at best. The republicans should be thrilled!

By now this Dick guy was really getting on my nerves.

Honestly, I had to tune a lot of it out in order to get through the call.
So when she wrapped up the bullshit speech, she asked if I would support Dick's conservative movement. 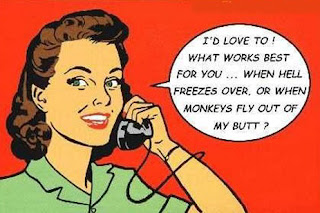 Oh HELL NO, I responded.
Dick wants to pin the debt on Obama, but his new job came with $13 trillion debt
Dick can blame the republicans who rang up that debt
Dick does not have my support!
Furthermore Dick knows it was George W Bush's "ignore the economy" & wasting money on wars that ruined the economy and created the dire unemployment situation.
I calmed down a bit, and then apologized to her for having to do that job, making these awful calls.
She responded "I'm happy to have a job".

Notice she did not say "I love my job", or "I support this bowel movement", she is happy to have A job, any job. She  implies that she could just as easily be scrubbing toilets, or asking if you'd like fries with that McMeal. How awful to have to do rancid political phone calling with a not-at-all subtle hate filled message. Flipping burgers would leave you feeling less greasy.
I'm sorry the  Bush regime ruined the economy so that you have to do that crappy job reading those lies.
That's 8 years of elephant shit Obama is cleaning up after!
She gave some pat polite closing line..... thanking me for my input.
Yea right!
If I was going to endure that call, they would hear my real thoughts.
I can only hope they put me off their list as a result.
I am amused now, but truth be known, when election time nears, I probably will hang up-- on any political trolling.
Now that I think about it, the whole political situation is really getting on my nerves!
Are these annoying calls streaming in to your home & invading your head space?
Do you like to mess with them, or are you in the hang it up camp?
Posted by Fran at 9:01 PM

you were much more polite than i would have been. i would have interrogated the girl over dick's toe-sucking fetish, and then a torrent of f-bombs would have followed. i sorta wish they would call me.

I hope they DO call you! What fun that might be.

It was such a *wait for it * moment though, to have the prerecorded message from Dick himself, then the human.
Had to listen to a whole lot of drivel before I could launch into my Oh hell no tirade.

I was gonna ask if that was the same Dick that paid prostitutes to ride on his back and whip him like a horsey ... but nonnie already answered that!

I don't receive those types of calls. UT is obviously so in-the-bag they just assume no politicking is necessary.

Good points about the poor lady who had to read the canned message. Yes she has a job. Nuthin more, nuthin less.

Hello, too many blogs, too little time, but I have to say you have my sympathy. Perhaps you had too much sympathy for the caller -- you should have told her that when enough Indians have been coached into losing their accents, her job would be exported. It's a moral dilemma. I suppose by taking time to talk with her, you both made her day a little better and kept her from inflicting her scripted BS on a couple of other people. On the other hand, her number of calls is probably monitored, so a few more talkative people like you could cost her that precious job. It stinks.