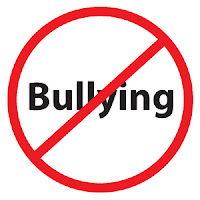 It’s not often that a political story jumps out at me during election season, but the Mitt Romney bullying story did. At an elite prep school, Romney cut off the hair of a fellow student while other classmates held the frightened, crying boy down.One of the bullies said he still is haunted by the boy’s cries, who was described as “different and effeminate.” He added that he wishes he could forget the screams and the look of fear and could go back in time and stop it. He also said Romney in his youth went after people who were “different.”

Romney doesn’t deny his role in the incident, but he says he “doesn’t remember” it and regards it as a youthful prank. One man can’t forget, and another man can’t remember.
A President Romney would bring a whole new meaning to the term “bully pulpit.”

Honestly, bravo & well said. If Romney truly can't remember terrorizing a fellow student who screamed for help,people should forget Romney.
Instead he hides behind the "I did stupid things in my youth". There is a world of difference between stupid & mean, hateful, prejudiced & inflicting physical forced chopping off of hair, to force a student to not be different.

One former classmate and old friend of Romney’s said there are “a lot of guys” who went to Cranbrook who have “really negative memories” of Romney’s behavior in the dorms, behavior he describes as “like Lord of the Flies.”

Romney is lying when he claims to not remember it. The incident built up over days during which Romney was constantly overheard berating the victim for his appearance. The phrase, "he can't look like that", has been recalled by others who took part in the incident, one of whom apologized to the victim decades later when he ran into him in an airport.

Granted we all do dumb things in our youth but this is beyond dumb. He was and is a bully. He believes still that he knows what is best for others. Of course he is going to lie about this.

The author nailed it-- others can't forget it & Romney can't remember it.
This was more like a violent hate crime & not a childish prank. At minimum it was assault & battery.
Romney would like to forget it.... but it is telling
what people do when they are not in the prefab spotlight.

it is about bullying...and the fact that he justifies it now..by saying he can't remember or " I didn't know he was gay" ( like that makes it ok ? ) what the heck...and the MSM tries to paint it as youthful indescretions..."pranks' , he was 18 and in some states it would be listed as assault....

and that poor boy grew up and grew older and died knowing he was bullied...

I find it amazing Mitt was the Scissors boy-how could he not forget...unless there are too many incidents to remember...

Hi Allie ~ Mit wants to forget- just like how he forgot about subjecting his dog to the rooftop road trip. All these things just really show Mitt can do horrible things & then forget about it. That's how he would govern- throw those who are not in the 1% under the bus & don't look back.