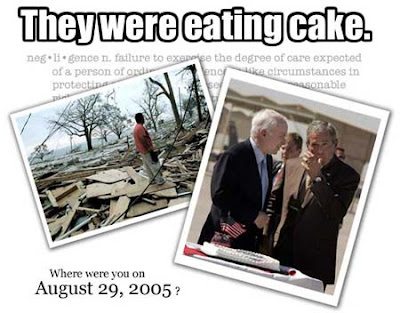 Three years ago today, Hurricane Katrina, the costliest and one of the five deadliest hurricanes in the history of the United States hit land in Lousiana & Mississippi..The most severe loss of life and property damage occurred in New Orleans, Louisiana, which flooded as the levee system catastrophically failed, in many cases hours after the storm had moved inland. The hurricane caused severe destruction across the entire Mississippi coast and into Alabama, as far as 100 miles from the storm's center. Nearly every levee in metro New Orleans breached as Hurricane Katrina passed east of the city, subsequently flooding 80% of the city and many areas of neighboring parishes for weeks.

The above snapshot is a photo of Bush & John McCain, eating cake on that horrible day. Even if Bush was not appraised of the situation at that particular moment, it was many days before serious help arrived, while Bush flew in for a photo op, and gave praise to the unqualified buddy he appointed to the chief of hurricane relief operations, Brown was later recalled from the position. Three days after the recall, Michael Brown resigned as director of FEMA in spite of having received praise from Bush with the famous remark, "Brownie, you're doing a heck of a job." 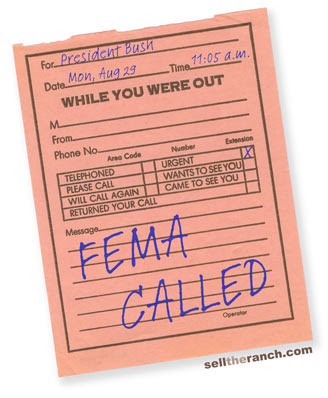 In Obama's acceptance speech on Thursday night, he stated the following:

"America, we are better than these last eight years. We are a better country than this.

We are more compassionate than a government that lets veterans sleep on our streets and families slide into poverty; that sits on its hands while a major American city drowns before our eyes." 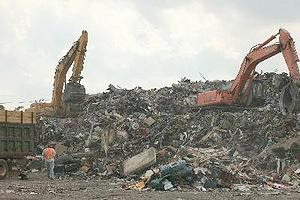 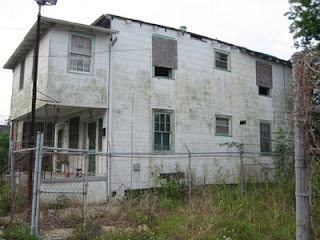 Note the high water line on this abandoned house 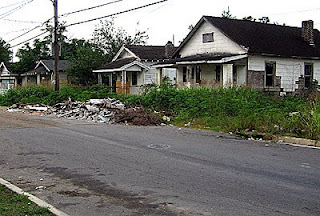 Debris left on the streets of homes that remain empty 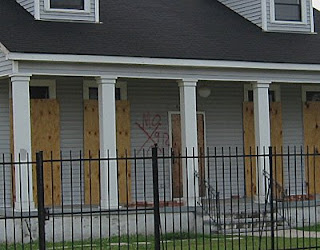 Boarded up, out of order.
Breaking News: WaPo reports "Republican officials said yesterday that they are considering delaying the start of the GOP convention in Minneapolis-St. Paul because of Tropical Storm Gustav, which is on track to hit the Gulf Coast, and possibly New Orleans, as a full-force hurricane early next week.

For Bush and Republican presidential candidate John McCain, Gustav threatens to provide an untimely reminder of Hurricane Katrina. A new major storm along the Gulf Coast would renew memories of one of the low points of the Bush administration, while pulling public attention away from McCain's formal coronation as the GOP presidential nominee."

Low point, of horrific abuse and lack of power of this administration, indeed. Perhaps Mother Nature is casting her vote early? We certainly should never forget how incompetent and negligent the Bush Administration was in one of this country's worst natural disasters.

As another hurricane brews in the Gulf Coast, let us realize we as a country are drowning in the floodwaters of a regime that has abandoned us, and abandoned any sense of morality, after 8 long years, we do need to head to higher ground.
Posted by Fran at 9:11 PM