Putting the FREEDOM back in free speech 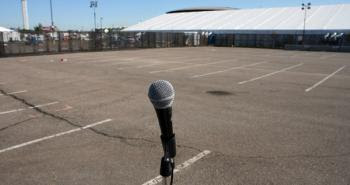 Denver Police & Homeland Security decided they would contain protesters near the DNC convention in a fenced area, dubbed the "Freedom Cage". Here is a picture of that area-- empty.
CommonDreams reports:
"On Monday afternoon, a couple hours after the convention kicked off, the zone was an asphalt desert. A microphone stood on a lonely stand. A Canadian documentary crew waited for protesters, who never came. An official sign-up sheet near a low-rise platform was a study in sarcasm.

"It's so far away (the freedom cage, from the convention venue), it's surrounded by cops, it's just ridiculous."

One of the most active groups is Recreate 68, an alliance of anticorporate and antiwar protesters that has demonstration permits every day of the convention. But rallies and parades have also being staged by groups pitching everything from immigrant rights, women's equality, and Ralph Nader to lower fuel costs, legal marijuana, and a united Jerusalem.

As of Tuesday night, the city had reported 135 convention-related arrests. Most occurred Monday night, when police say a crowd of 300 disrupting traffic near Civic Center Park refused requests to disperse and then rushed a police line.

Suspects were charged with disobeying orders, obstructing a public street, and interference, violations of city ordinances. But most events have been peaceful, officials say."

On Wednesday, a throng of protesters, lead by Veterans for Peace, surged a group of people three blocks long, led by members of the Iraq Veterans Against the War, streamed from the Denver Coliseum on Wednesday in an anti-war protest march to the Pepsi Center, where the Democratic National Convention is being staged. The group is calling for an immediate end to the Iraq war.

By contrast, in China, the Government allowed people to apply for permits to protest in official designated zones-- but then never approved one permit to do so. In fact they slapped a few 70 something year olds, who wanted to protest their displacement, loss of homes due to the Olympic construction, with a sentence of "re-education classes" something usually given to prostitutes and thieves. They were told if they disliked the re-education program, they could be sent to labor camp, an even worse fate. One of them nearly blind, both elderly. 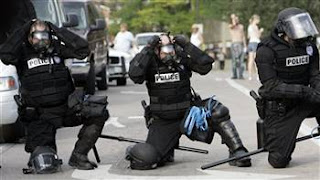 So the US did not require the permit process, they tried to contain protesters in a fenced zone lorded over by law enforcement officials. The police presence has been crushing in Denver already, with caravans of cops flying around the city and eight or 12 guys in full riot gear hanging onto the outside of big SUVs in a show of force. The free speech crowd rejected the secluded area, and one person said no cars could get within a several block radius, making it difficult for the elderly & handicapped access. 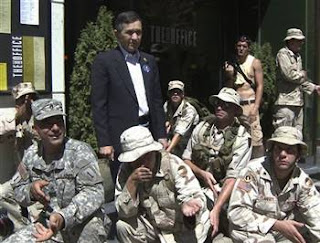 No surprise that protesters are thinking outside the box, or in this case, outside the cage.
Posted by Fran at 10:42 AM

hi fran, i cross posted this at sirens. thanks :)

Thanks Betmo..... So glad the Veterans for Peace put together this huge presence (3 blocks long), calling for an end to the Iraq war. I saw/heard nothing about this on the news. Many of those protesting are IRAQ VETERANS- they should be heard & given air time.... way more than some of the boring speakers the DNC is giving time to.
The internets come through again!

Right, Fran! This is news to me, too. I really appreciate your post here. Glad it is also on Sirens. Great comparison/contrast with demos in China!