GM "On the Fritz" 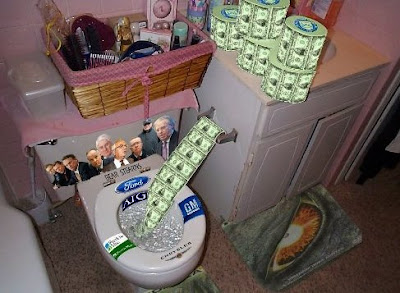 GM's CEO Rick Wagoner is stepping down, to be replaced by GM's president and chief operating officer, Fritz Henderson.

Thus GM is officially On the Fritz!


bnet reports: "According to the company’s recent proxy statement:

“There is no general severance plan for executives. At the discretion of the Executive Compensation Committee, Named Executive Officers could receive severance pay up to 2.99 times base salary and annual bonus target. Other salaried employees may receive up to 12 months salary upon involuntary separation.”

The annual target cash compensation for Wagoner is $5.0 million per annum, which includes a base salary of $2.2 million. So the board could offer Wagoner up to $15 million in severance pay.

Wagoner’s stock-based performance incentives, worth approximately $10 million at December 31, 2007 (common stock at $24.89), can now be cashed in for about $2.6 million. In addition, some 2.9 million incentive options awarded to Wagoner in the last decade at exercise prices between $20.90 a share to $75.50 a share are now worthless.

Upon separation from the company, Wagoner, 55, would be eligible to receive an annual annuity payment of $61,200 from his supplemental retirement plan. He will, however, have to wait until the age of 60 to tap his executive retirement plan, worth an estimated $19.7 million at December 31, 2007. In addition, Wagoner had a 2007 year-end non-qualified deferred compensation account worth an estimated $765,000."

So we needn't worry about Wagoner-- he will exit with a golden parachute.

Meanwhile since the first round of bailout money, GM's sales are down 45%. Apparently people are not comfortable buying a big ticket item (a new car) from a company on the edge of bankruptcy. That and the fact much of GM's fleet are gas guzzlers.
Yes indeed, even with lucrative Military contracts for the HUmmers during a time of not one, but 2 wars, GM is struggling.

The thing that bothers me most about GM, is the fact they sacrificed the EV1 electric car, probably to keep their cherished relationship with big oil. Now big oil has the biggest profits in history, while the automaker teeters on the abyss of bankruptcy & failure.

The honeymoon is over!

GM needs to "save itself" and get ahead of the curve with electric vehicles.
Don;t tell us how the Volt will be ready in several years at a sky high price.
Pull out the engineering designs of the cars made in the early 90's..... and roll production.

As for Wagoner- he will have a safe & soft landing- much more so than the company he helped run into the ground.
Posted by Fran at 9:24 AM

yup...he is leaving with plenty of goodies prick that he is...unreal...

there should be a special hell for these assholes...

If GM has to file for bankruptcy, let them do it....
forced restructuring.

But I want to see equal demands for Wall Street as they are making for the Auto industry.

They both fucked up. Let them both have to make equal sacrifices.

When you are bailing out failed businesses, you get to make the new rules.

Whelp, I was feeling really badly about Mr. Rambling's circumstances, but as I read more and more about some of these people being dispossessed, like GM's CEO, I'm wondering if my sympathy for Mr. Rambling isn't being misplaced?

Might you be hiding something from us? (Like the facts?) Exactly what is Mr. Ramblings benefits package? C'mon, it's ok. Might you be moving to the southern Mediterranean coast of France?

Mr. Ramblings and 2,200 other Monaco Coach employees are the lucky recipients of letters announcing the forthcoming COBRA insurance. These fortunate individuals have the opportunity to pay 102% of the cost of health Insurance-- while on Unemployment!

But wait! There's more!!!
The following week, these winners got notice that the COBRA health insurance offer was rescinded, because of two items--
#1 Gosh gee they are new at this bankruptcy thing.

#2 Turns out they were "self insured" so therefore COBRA is not an option.

When you are so well-to-do who needs health care coverage... dental, medical & vision. Pishaw!

And what high life lifestyle would not be complete without lawsuits?

To date, there are TWO Class Action lawsuits filed against the ex-employer.

With any luck maybe in 2 years we will get a check in the mail for $3 bucks, after the lawyers get their piece of the pie.

the only question remaining is can we get that cup of coffee we've always wanted, after taxes.

As for France...the closest we will get is looking at pictures in library books, while unemployed.

It's not quite the "golden parachute"
More like a golden kick in the ass.

Looks like we won't be rubbing elbows with Wagoner, while his only problem now is where to spend the millions he walks away with.

You know, GM used to hire engineers and CEOs with imagination and enthusiast leanings. Now they hire Harvard Business School graduates. How can they expect a populace to get excited about and buy cars designed and engineered by computer geeks and thieving bean counters?

Ed Cole was a remarkable and able leader of GM, and a true automotive enthusiast.
Wagoner, not so much...

And incidentally, GM had an electric car back in the 60s.
According to the Society of Automotive Engineers (SAE) paper #670175, "Electrovair - A Battery Electric Car," the 1964 Corvair was chosen for the first conversion to an electric drive. A later version, the Electrovair II was based upon a 1966 Corvair.
Follow This Link!
(www.corvaircorsa.com/monzapr7.html)

Remarkably, the performance and range of these vehicles was similar to the offerings made today. Battery power and weight is a problem that has not been solved in 45 years!

How do I know this? I used to own 12 of these things and was an avid car club/SCCA racing follower!

Taking it back even further GM's first cars were electric back in the 1800's.

I watched the film *Who killed the electric car* - the story of the EV1- in the early 90's it was a test car- only leased in S. California. People loved them & wanted to buy them when the lease was up-- GM rounded them up & crushed the perfectly functional & popular vehicles. Clearly a big oil influenced move.


In that film they talk about a man, retired engineer, who invented the best electric car battery. They bought the patent from him & proceeded to use the inferior battery.

They never intended to make the electric car a success- think of the crushing blow to big oil!!!

Of course now big oil is rolling in dough, and the big 3 are on the edge of bankruptcy.

They HAVE to make electric cars, and they have to make them affordable.

It's not rocket science.

This whole excuse of more years needed to "invent" the VOLT electric car is BS.

they can just rename them--
"I hate big oil" has a nice ring to it.