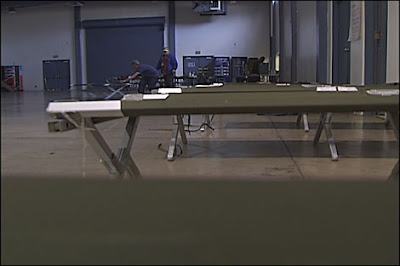 This local story has really haunted me. It started back in December a local veteran, who was also an alcoholic, was found dead, covered by a blanket of snow, frozen. Many said he tried various programs for the alcoholism, and different assistance from Vets programs, but none of it stuck. A local editorial said this is how he wanted it, others rejected this romanticised version, and felt it was a tragic death that should not have happened. Vets pulled together to make sure he was given a proper burial.
This event was the catalyst for putting together an emergency overnight shelter. The Oregon National Guard had recently moved to a new facility leaving the building empty & available to be an emergency winter shelter.
The shelter was named the Egan Memorial Warming Center, after Thomas Egan, the homeless veteran who froze to death on the streets last December.
They initially set up 70 cots. At the time they set up the shelter, overnight temps dropped into the 20 degree range-freezing cold.
Within 5 days, the makeshift shelter had soared to 157 people coming for a place to sleep, and to catch a meal.
Over five nights, the center provided 12,000 meals and beds for 600 people.

Clearly, there was a need, as the Mission Shelter ( the other permanent shelter in town), was full to capacity.

Then they announced they were closing down.
They did not have enough beds for everyone. Additionally, officials felt they needed a better way to deal with some people who suffer from serious medical issues, substance abuse problems and mental health issues.

That's right- they closed the emergency overnight shelter because there was too much need. Too many people with serious problems and issues they were not set up to deal with. This story just floored me. Couldn't something have been done to help triage people coming for help in terms of their needs?
The other part of this story is those who fall into this middle ground of mental health care.
A friend told me about someone with severe paranoid schizophrenia, and the mental health screeners ask questions like can he dress himself, can he use the restroom, to determine if they qualify for mental health care. There is a long list of other serious nonfunctional items that should be considered as criteria, but the current *pass the buck* standard... if you are marginally functional, we can't help - unless and until it becomes a crisis.  You can be sure this group dealing with family members with severe mental health issues are least likely to have the ability to protest, and lobby- because their hands are full just trying to keep it all together.
In an attempt to connect the dots, this is in part, why there is so much anger with the AIG & big buck bailouts. From my perspective they are literally stealing from the treasury, monies that should be used for Veterans, and Health Care, and Education and all the other items that need tending to.

In closing, I will say that when the recession hits a community- you can witness the ripple effect.
The State of Oregon is now at 10% unemployment.
I can't get this shelter story out of my head- it is such a snapshot of the current reality.
Posted by Fran at 12:01 AM

I am linking to your story...thank you for this..and for telling it- people don't understand WHY I post the Tent City Stories...this is why...

thank you for having Empathy and Compassion and Heart....

Blogland is lucky to have you.....

( btw thanks for the Arlo and Woody Fix,....love them...)anyways...I did do a post linking to you- near the top of the Homeless Collections of posts....you'll see ....thank you for blogging this....

It was such a bare bones set up-- as seen in the photo-- the actual room, with metal military style cots, lined up in rows. Blanket & a pillow.
Roof & heat. Restrooms on site.
Just the basics.... someone put it together to have food to serve. A fledgling project.... but when so many arrived and those with severe mental health issues, and flared up medical problems, they were in over their heads. They felt they could not assure safety, and they ran out of cots.... having to put people on the floor with blankets.

This is- when you are homeless, having a roof & heat shelter & food was an upgrade- even if they had to sleep on the floor.

I could see where if you had a person with mental health issues came in out of control, confrontative, how they were in a catch 22. If you expel them & something happens, you denied them access, and the liability of allowing them to stay.

Still, they could have coordinated w the hospital mental health people... if a person was not in compliance w basic rules, would have to be removed from the site.

This story just bothers me to the core.

Instead everyone lost out & the old Armory building sits empty. Damned shame.

dying of hypothermia would NEVER be anyone's choice of a good way to go.

I sure don't understand the logic for shutting down that shelter. makes no sense. there is too much need, so let's not do anything?

Maybe Geo Carlin had the right idea to use golf courses for homeless shelters and dead office bldgs for community health care space?

DK~ They must have had some serious mental health issue person come in & disrupt the whole scene, and others with vastly unattended medical issues.
Plus not enough beds. I think they had limited volunteers- it was a pilot/supplemental program.... but having had tested the waters, they sure do know there is a huge need. More than double the amount of people showed up then they had expected or were prepared to deal with.

They did not reveal all the details -- but something happened that really made them have serious safety concerns.

Just seems so wrong to have thrown in the towel, instead of a call for help. Including medical professionals, and other volunteers.