What would Gandhi say? 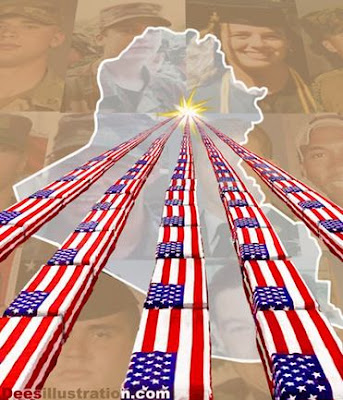 I saw it on a "list of accomplishments".
Lifted the ban on photographing the flag-draped caskets of our war dead.
There is a part deep in my soul that cringes.
Has it really come to this?
We accept war as a regular part of what our county does?

It is true that our last president had ordered a ban on photographing flag draped caskets. The claim that it was out of respect to the soldiers, but photography was banned, even when families specifically gave permission to photograph. Those who wanted to make public acknowledgment of the ultimate sacrifice their loved one had made- as a way to honor them.
They did not want to fade away, unacknowledged, as a part of a way of sanitizing the true cost of war.

So yes, I understand that it was considered "progress" that our new President, Barack Obama had lifted the ban on photographing the flag-draped caskets of our war dead, but I can not, in my heart of hearts, think that we would check this off as an accomplishment, and call it good.

I think we all really voted for change- not just a political slogan.
We desperately needed change, a serious major total turn around, really taking our country back from the horrible path we were taken down.
The idea that the troops will stay "longer than expected" in Iraq, and "the plan" is to leave 30,000 to 50,000 troops in Iraq, as well as a planned surge of 17,000 troops into Afghanistan while we are dropping bombs from drone planes in Pakistan, does not constitute change.
I do not want more flag draped coffins period.
That is the kind of CHANGE I CAN BELIEVE IN.

I wonder if Gandhi were alive today, and he were told of this "accomplshment", what would he say?

Are you serious? An entire country is satisfied that photographs are now being allowed of the war dead in caskets, and you think you have made progress?

You have not made progress until you stop having war, and war dead.

That is what I imagine Gandhi would say. Something simple and to the point.
As we approach the beginning of the 7th year of the illegal occupation in Iraq, I want us to be fired up. To be compassionate. To wake up!!! Lifting the ban or cloak of photographing of the flag draped coffins is a tiny, first step towards any semblance of progress.
Let's not go hanging any Mission Accomplished banners, over the topic!

We must make a connection between the means & the end.

Perhaps now we have a president that will listen- we must raises our voices. We must stop allowing the death and destruction.

We must also consider the need to connect the dots between the $604.5 billion dollars spent on war, and the fact we have ever growing tent cities, here in America. This is not a happy camping area- these people are living in tents for lack of a place to actually call home.  (This photo, Sacramento, CA.)

I love this short clip.... think different from the Apple people.....

I so much appreciate that you always speak from the heart! I know it wounded you deeply to see the lifting of the ban on photographing caskets listed as an accomplishment. Maybe we have a difference of terminology because I consider an accomplishment to be something accomplished without judging whether it was something I liked or not.

In this particular case, I do think lifting the ban is part of an overall effort at transparency and to stop lying the american people, which I do think is positive. I also think people being able to see the caskets will help to turn public sentiment. It did in Vietnam. I remember the big cargo planes of caskets being shown on the nightly news and it was definitely one of things that spurred the anti-war protests.

I will watch the Gandhi vids tomorrow. Too tired tonight.

Hi DK ~ I see both sides, but when it comes to the US government and wars, I am admittedly a cynic.
Jaded. Untrusting. Because we have been lied to and manipulated- and it is always somebody else's kids who fight and die in wars- not the people who plan them.
I am a *big picture* person. So I see the whole vicious cycle- we continue to play the role of 9-11, World Police, and how pouring $600.5 billion is indeed related to the serious financial woes of our country. When you have to borrow money to keep on warring, it's time for an intervention.


There is always one more country we think we need to "fix". It always takes longer, needs more troops, has more fatalities, and costs more then the war hawks originally thought.

We saw it in Vietnam. We see it in Iraq. Stay the course. Send more troops. On the cusp of winning.
The years drag on. The casualties continue to rise.

In the Vietnam war, they actually showed live footage (for the first time ever) of the war - not just flag draped caskets of returning soldiers, but actually seeing the chaos of the so-called "war theater".

This time, in Iraq, they embedded the press, which came with heavy scrutiny of what they press was allowed to report. Those journalists who remained independent, literally risked their lives, and the Iraq war is the most deadly for journalists- 136 have been killed.


Lifting the ban does indeed expose the *truth* about war, and it is a big difference in the attempt of the transparency goal. I don't disagree with that aspect.

I'm trying to think of a good analogy for my perspective. It's as if people are debating about where to put the sandbags in a flood situation, when the levee has already failed, and the floodwaters are 12 feet deep.

While we are having this discussion, 2 more soldiers and a few more civilians were killed.

I don't for a minute, think the 17,000 troop surge in Afghanistan will quell the problem there.
If we look at the history, the US seems to be mired in this trend that one war leads to another.

As John Lennon points out in the "Meet the Walrus" clip you posted, we can't blame the Government for continuing to have wars.

We (the people) allow it.

You are a good cyber~ friend DK, so I would never personally attack you, and I do "get it" that lifting the ban is indeed a step away from the Bush lies.

But I have to respond to this statement:

"we have a difference of terminology because I consider an accomplishment to be something accomplished without judging whether it was something I liked or not. "

I can pluck this one straight out of recent history- Remember Bush standing in front of the
*MISSION ACCOMPLISHED* banner, May 2, 2003 ?

That being said, "accomplishment" is in the eye of the beholder.

Oh Fran, I didn't feel personally attacked. I love a good discussion and you are one of the best discussers, always willing to tackle a subject.

Of course I agree wholeheartedly that we can no longer afford to be the world's policemen. Fighting the congressional repubs over every nickel spent on ourselves is bad enough. Moving into debtor nation status has to give us all pause about where the govt (us) chooses to spend its (our) money.

Now about that "Mission Accomplished" banner ... hmmmm ... my problem with that banner was the word "mission", which I don't believe we've ever known. To this day I don't know WHY we went into Iraq, certainly not what our mission was/is there ... much less whatever it was that was celebrated as "accomplished" when Bush flew over San Diego Bay to an aircraft carrier anchored just offshore.

I think Bush thought they had secured the oil fields & the Iraqi troops were "easy", that combat was over,
shock & awe did the job. It was just a matter of grabbing the oil, er I mean "installing democracy".


We had liberated Iraq! But dammit.... the announcement does not match up with reality & 7 years later, we are still staying the course, and accomplishing the mission, or both sides already lost?

It's just that beyond the allowing of the photographs, is the announcement of a surge in Afghanistan, and leaving so many troops still in Iraq. Leaving 30 to 50,000 troops there is not the troop withdrawal I'd been hoping for. Now they say "for training". They were training Iraq to turn it over to them 3,4,5 years ago.
It just keeps dragging on.

Sending 17,000 troops into Afghanistan is also not
the diplomacy I had hoped for. Plus historically the odds are bad, and we've already logged 8 years.

Now we get new & improved, enhanced, with more
troops in Afghanistan war.

Now the country is broke, having to make cuts, but never cut the war funding.

And as I sad in the beginning, it's always someone else's kids doing the fighting & dying.

I can't help but think the REAL strategy in the Middle East is endless war. We are going to keep hearing excuses why we need to continue to be there. We are going to be the ones who pay for it- in money and lives.

I'm sick of it.
The whole damned thing.

One thing..and I would never defend shrub.. you should know that by now...lol but it wasn't him that institued that policy.. it was Daddy bush back during the first Iraq war.. Clinton continued it and so did shrub.. so it has been going on far too long.

No, I don't like this anymore than anyone else.. Fran we have talked about it before.. and I don't mean to get into your alls discussion.. but this in my opinion is the only way to make sure we hold the feet to the fire and make sure it stops. There is a faction trying to get Pres. Obama to stay in Iraq.. I have been talking with some of them about that trying to make sure that doesn't happen. This Thomas Ricks that has been all over the TeeVee lately is part of the group pushing to stay. Bob Fertik is one of the ones pushing to get out. He and I communicate through twitter and at democrats.com about this and other things. But it is one of the things I feel passionate about but just don't talk about a lot I guess.

Hi Annette~ This is an open conversation- please do join in- the whole point is to kick ideas & perspectives around.

As far as the topic of the photographing of the flag draped caskets, ultimately, it is the family's choice. It is their loved one, and a personal decision. I figure they are going through one of the most difficult time of their lives, and their choice should be respected & honored.

We do know the gvmnt mandate of no photos was based on damage control & a way to sanitize war.
Make the "death" part, disappear.

Like I said before I am jaded.
Although they don't say it in the same paragraph- it IS reflected by their actions.

Allow photographs of caskets
Keep troops in Iraq longer
Surge troops in Afghanistan- and saying they expect an "uptick" in casualties in Afghanistan.
And I'm throwing in the tent city concept to make the whole thing a complete circle.

The idea is to stay in the region. It is about resources (oil), and strategic footholds.

really wonderful post and loved the quote about changing the world...