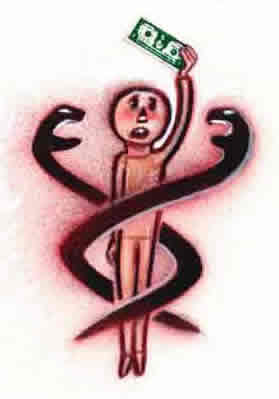 Dear Friends~ If you are equally disgusted with Baucus' bogus health care bill, please send him your thoughts directly.
I just did. Here is my note:
Dear Senator Baucus: Just one simple question, Senator, How do you sleep at night? Your health care bill is abysmal.
You too can express your thoughts about his waste-of-time, clearly prostituting his vote to the for-profit status quo.

Max Baucus, Senator from Montana (click here to go to his web site to e mail him)

If you wish to read on about the bill......
Baucus' Bogus bill includes such atrocities:
After wasting more than a year, Montana's senior U.S. Senator Max Baucus introduced the America's Healthy Future Act. Baucus, chairman of the powerful U.S. Senate Finance Committee, demonstrated the power of money & the insurance lobby.

In addition, The Congressional Budget Office estimates the Baucus plan would make an $856 billion investment in the health care system over ten years.(Please note, that is less than what they spent on wars in 8 years)

• Provide tax credits for small businesses to help them offer insurance to their employees; • Allow people who like the coverage they have today the choice to keep it;

• Give consumers the choice of non-profit, consumer owned and oriented plans (CO-OP); and • Standardize Medicaid coverage for everyone under 133 percent of the federal poverty level.

>>>>> They thought Grandma was endangered before????

• Provide annual "wellness visits" for Medicare participants and their doctors to focus on prevention;

>>>>> Adding an extra appointment would not be wasteful???

However, that’s not the main problem with Baucus’ plan. It assumes that the market will not change after he levies a whopping 35% excise tax on “Cadillac” plans. Insurers facing that kind of disincentive, especially as sharp as a 35% excise tax, will simply stop offering those plans. Either that, or they will pass the costs on to the consumers of the plans, but consumers will balk at paying 35% more for their existing plans when less expensive plans exist.

When those plans disappear, what happens to the funding for Baucus’ overhaul? It develops a big $259 billion hole, which will have to get filled some other way. The most likely outcome will either be cutbacks in spending and more rationing decisions, or bigger taxes on the middle class.

In fact, Jay Rockefeller objected yesterday on the basis that the Baucus revenue plan amounted to a middle-class tax in and of itself:

It’s not every day that you hear a Democratic senator charge that a fellow Democrat is proposing to raise taxes on the middle class, but that is what happened on Tuesday when Sen. Jay Rockefeller, D-W.Va., ripped into the health-care bill developed by Sen. Max Baucus, D-Mt., the chairman of the Senate Finance Committee.

The Baucus proposal would impose, starting in 2013, a 35 percent excise tax on insurance companies for “high-cost plans” — defined as those above $8,000 for individuals and $21,000 for family plans. …

These are the traps that static tax analysis lays for those who use it. In this case, this is so obvious that it’s questionable whether we should blame static tax analysis at all, or just the bureaucratic cluelessness of people who have no familiarity with the private sector and its normal reaction to taxation."

Baucus’s proposal would require almost all Americans to have insurance or pay a penalty, expand Medicaid and provide subsidies to help millions of low-income people get coverage through an online exchange.

“Any health-care proposal that does not have the competition and cost containment that could only be achieved with the public option will be considered dead on arrival,” New York Representative Anthony Weiner told reporters, adding that Baucus was wasting time trying to appease Republicans.

In the past six years, nearly one-fourth of every dime raised by Baucus, D-Mont., and his political-action committee has come from groups and individuals associated with drug companies, insurers, hospitals, medical-supply firms, health-service companies and other health professionals.

"I'm convinced that this (money) has a profound influence," says Quentin Young, national coordinator for Physicians for a National Health Program. "Otherwise, how could Baucus, an otherwise respected and wise politician, say categorically that single-payer (national health insurance) is off the table?" Since 2003, perhaps no other member of Congress has received more money from health and insurance interests than Baucus. Only his Republican counterpart on the Finance Committee, Sen. Charles Grassley of Iowa, rivals him in terms of percentage of funds from these business sectors.
~ From mtstandard
Posted by Fran at 7:41 PM

I don't know enough to even pretend to know the right solution to the health care mess. But I did just read about that tax on the "Cadillac" health care and I know that is not going to work. According to the article I had read this morning, the tax would probably kick in for a lot of middle class families' plans, not just the senior partners of Goldman Sachs. And that in certain areas of the country (probably mine) the average family amount they're targeting as the threshold will easily be met with inflation and trigger the tax even sooner.

The coordination of various doctors so as to avoid duplication of health care and the electronic records actually sound like a good idea to me. Now that all doctors are specialists and you hardly ever have your regular general practitioner anymore, there really is a lot of duplication and confusion. And why is it every time I go to the same doctor they ask me YET AGAIN what drugs I'm on? Hello, didn't you write it down last time? I think they should be able to print out a computer printout of what I told them last time and then I can just write any changes on it and they can input them into the records. Why do they rely on ME to remember every time what milligram dose of something I'm on? This is a system ripe for mistakes.