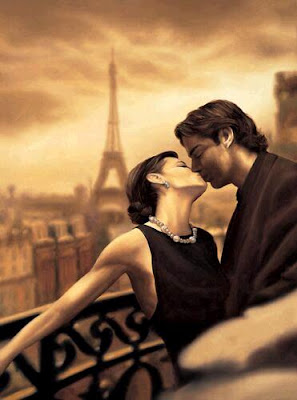 In colloquial French, the word "bise" also means a light kiss, usually given to a friend in greeting or before parting.
Hands get shaken; hands get kissed. And the light cheek-to-cheek peck, known as "la bise," is a social greeting, woven in at the very youngest age.

CNN reports:
Some joke that before the French could ever give up such social graces, pigs would fly.

With official publicity campaigns about the H1N1 virus, to directives on avoiding practically any close encounter of the corporal kind, the country has been put on alert as the flu season gets under way.

In schools, teachers are telling their young charges to forgo the bise, and instead capture their displays of affection in heart-shaped greetings to slip into "bise boxes."

In France, they kiss on main street.....

But because of the pandemic, they are being advised not to do la bise, and to not wear neckties, because they are the least washed article of clothing.

Let's hope the French are able to kiss off spreading Swine flu, but at least they have the number 1 health care system, as rated by the World Health Organization. 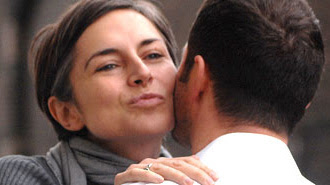 Translartion: Goodbye, sweet kiss, for now
Posted by Fran at 9:05 AM

people in this country should stop shaking hands. it's unnecessary and probably more unsanitary than la bise.

good point, but imagine the chilly reception if someone extends a hand & you decline.
but I bet if you were wearing a green surgical mask out in public, the # of people extending a hand for a handshake would drastically decrease.

I'd be happy to stop shaking hands OR kissing at least in business. I never know when to kiss someone and when not to. At least in France you knew everyone did "la bise" so you know the protocol!

Maybe we need to adapt the universal bow???
It gives recognition without sharing germs!

although I think the la bise (kiss kiss) is a sweet tradition & hope it returns as soon as the flu is gone.