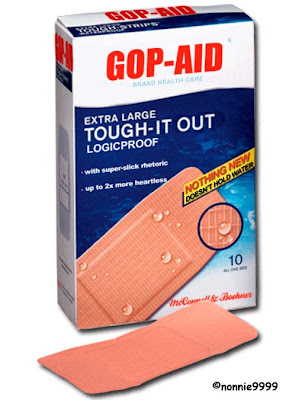 The Utah Attorney General's Office announced this
morning that it will join several states in a lawsuit
challenging the health care reform legislation
passed by the U.S. House of Representatives Sunday
evening.“
An unprecedented mandate and other provisions violate the U.S. Constitution and infringe on individual and state
rights,” said Attorney General Mark Shurtleff. “This
lawsuit will help make sure the rights and the
interests of American citizens are protected."

The attorneys general of Utah, Alabama, Florida,
South Carolina, Nebraska, North Dakota,
Pennsylvania, South Dakota, Texas and Washington
have agreed to file the lawsuit if the president signs
this bill into law. Other states are expected to join in
the litigation.
Oh! And McCain iced this lovely cake, with this remark:
"There will be no cooperation for the rest of the year." – Sen. John McCain
Nothing from nothing leaves nothing.
This shows just how out of touch McCain is--- did he really think we didn't notice the GOP had not been cooperative all along? 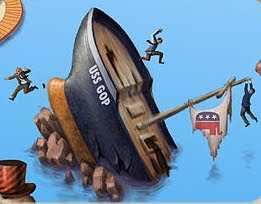 These states that don't want healthcare, should do the deed 100%.
No Medicare or Medicaid.
No VA.
No "socialist program", like Welfare or Childrens health care SCHIP.
Posted by Fran at 1:37 AM

These idiots can't even figure out it is a good idea to keep taxpayers alive & well!!!

the one error in your illustrations is that the rats are jumping off the sinking ship. rethugs are too stupid to jump off. instead, they've glued their shoes to the deck.

p.s. funny how a lot of those attorneys general are running for governor. i hope this sinks that piece of shit mccollum's chances in floriduhhh, but i fear that the rethugs have seniors so terrified, they might vote for the chinless bastard.

Oh man, How about that McCain remark?

But Florida has some dem strongholds yes?

floriduhhhh used to have some dem strongholds, but they seem to be withering and dying. i remember when the state was reliably dem. however, after bob graham retired, it seemed like the rethugs just took over. i hope this stunt by mccollum bites him in the ass.

hey at least florida still has some dem strongholds. here in utah, the ruling theocracy has no room for such silly socialism.

Mark Shurtleff was on The Ed Schultz Show tonight explaining this lawsuit in his this-is-just-business voice. He actually had the balls to claim that taking the matter to court will make it a better bill. insincere bastard.

hey I got an idea ... repugs are always raggin on about tort reform and claiming dems will never vote for it ... how about we tort reform their stupid lawsuit challenge out the door?