Who was that kid? Meet Marcelas Owens. 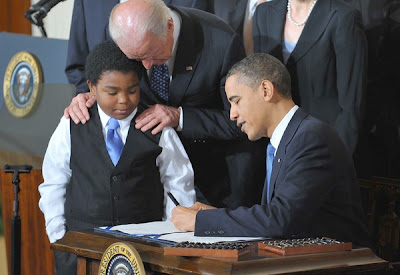 The L.A. Times reports:
"11-year-old Marcelas Owens, who stood quietly next to President Obama on Tuesday as he signed the long-debated legislation, has kept the jitters at bay, friends say, by pretending his mom was sitting in the front row.

She wasn't. She died three years ago of pulmonary hypertension, largely untreated because she lost her health insurance when she lost her job as an assistant manager at a Jack in the Box restaurant in Seattle.

"It's tough not having my mom around," Marcelas, a fifth-grader at Seattle's Orca elementary school, said at a news conference with Senate Democratic leaders this month. "But she's been with me in spirit every time I talk."

Plenty of American families have succumbed to a combination of illness, unemployment and debt. Marcelas' mother, Tifanny, fell ill in 2006 at age 26 with the crippling condition that causes abnormally high blood pressure in the arteries of the lungs.

"If she still had her healthcare, she'd probably still be here," Marcelas' grandmother, Gina, told reporters.

The family's troubles began when Tifanny Owens started missing work because of her illness, said Joshua Welter, who worked with the family at the Washington Community Action Network. Jack in the Box "let her go after she missed so much work," Welter said.

Jack in the Box spokesman Brian Luscomb said the only Tifanny Owens in their records was a team leader, the equivalent of a shift supervisor, who resigned "for family obligations" in 2006. "She was not involuntarily terminated," he said.

With no income, Owens couldn't afford transitional health coverage. Owens would occasionally go to the emergency room, and in one visit, she was diagnosed with pulmonary hypertension, which cannot be cured but can often be treated.

She was admitted to the University of Washington Medical Center in June 2007, and died a week later.

Marcelas, a plump-cheeked, soft-spoken youngster, became a celebrity of sorts after Sen. Patty Murray (D-Wash.) began talking about his family on the Senate floor."

This young boy could just as easily go on with his childhood, and not be a spokesperson/advocate for health care, he is clearly doing this from the heart, and it is sweet that he was included front and center for this major, historic event. I omitted the part of the story where cut throat conservatives accused him of being prostituted for the cause. Can't a kid be allowed to follow his hearts pure desire to advocate for a cause that changed his life forever? Stand tall in your place in history Marcelas, I'm sure your Momma is proud of you.

I know I have been critical of President Obama for a number of things but I can't begin to tell you how pleased I am about passage of his healthcare reform bill.

It's truly a new day in America!

Christopher~ Agreed. There are other topics I don;t agree w President Obama on, but this was a hard fought win, on a matter of huge importance. He championed the people's cause here.
What baffles me is the rabid response of those opposed. So angry and hateful about helping people in need? Don't they know people w pre existing conditions, or unemployed & uninsured?

Marcelas' story is pretty amazing- one week after his Mom died, he became a health care activist. You just know he will be a mover & shaker in his lifetime-- he already is!

Fran -- Even people on the left are picking up Flowbee's crap (reprinted on Firedoglake) and they're embracing it as the Gospel.

It's a mystery to me, baby!

The far, far right, and the far, far left, have gone so far around the flagpole that they're shaking hands now.

If you can explain it to me, please do because I'm at a total loss and as you know, rarely am I at a loss for words or analysis.

i hope that marcelas can go back to just being a little kid now. of course, a big chunk of your childhood is taken away when a parent dies, but i hope he can still experience some of the innocence that every child should be allowed to embrace.