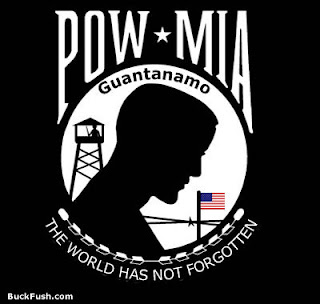 The remote prison in Cuba's Guantanamo Bay is one the items that most bothered me about the Bush regime. What need for a remote prison but to conduct illegal activities? Because Bush did not officially declare war in Iraq, these people are officially "detainees". These not-war, non-prisoners have endured some of the worst conditions imaginable.
In his campaign, Barack Obama promised to shut down Gitmo. I am relieved to say he is working on keeping that promise.

"President-elect Barack Obama's advisers are quietly crafting a proposal to ship dozens, if not hundreds, of imprisoned terrorism suspects to the United States to face criminal trials, a plan that would make good on his promise to close the Guantanamo Bay prison but could require creation of a controversial new system of justice.

During his campaign, Obama described Guantanamo as a "sad chapter in American history" and has said generally that the U.S. legal system is equipped to handle the detainees. But he has offered few details on what he planned to do once the facility is closed.

Under plans being put together in Obama's camp, some detainees would be released and many others would be prosecuted in U.S. criminal courts.

A third group of detainees -- the ones whose cases are most entangled in highly classified information -- might have to go before a new court designed especially to handle sensitive national security cases, according to advisers and Democrats involved in the talks. Advisers participating directly in the planning spoke on condition of anonymity because the plans are not final.

The move would be a sharp deviation from the Bush administration, which established military tribunals to prosecute detainees at the Navy base in Cuba and strongly opposes bringing prisoners to the United States. Obama's Republican challenger, John McCain, had also pledged to close Guantanamo. But McCain opposed criminal trials, saying the Bush administration's tribunals should continue on U.S. soil.

The plan being developed by Obama's team has been championed by legal scholars from both political parties. But it is almost certain to face opposition from Republicans who oppose bringing terrorism suspects to the U.S. and from Democrats who oppose creating a new court system with fewer rights for detainees.

Laurence Tribe, a Harvard law professor and Obama legal adviser, said discussions about plans for Guantanamo had been "theoretical" before the election but would quickly become very focused because closing the prison is a top priority. Bringing the detainees to the United States will be controversial, he said, but could be accomplished.

"I think the answer is going to be, they can be as securely guarded on U.S. soil as anywhere else," Tribe said. "We can't put people in a dungeon forever without processing whether they deserve to be there."

Obama has said the civilian and military court-martial systems provide "a framework for dealing with the terrorists," and Tribe said the administration would look to those venues before creating a new legal system. But discussions of what a new system would look like have already started.

"It would have to be some sort of hybrid that involves military commissions that actually administer justice rather than just serve as kangaroo courts," Tribe said. "It will have to both be and appear to be fundamentally fair in light of the circumstances. I think people are going to give an Obama administration the benefit of the doubt in that regard."

Prosecuting all detainees in federal courts raises a host of problems. Evidence gathered through military interrogation or from intelligence sources might be thrown out. Defendants would have the right to confront witnesses, meaning undercover CIA officers or terrorist turncoats might have to take the stand, jeopardizing their cover and revealing classified intelligence tactics. (Personally, I am OK with the revealing of classified intelligence tactics, that's sanitized code for torture). 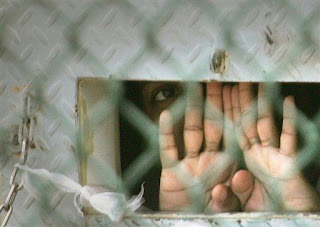 In theory, Obama could try to transplant the Bush administration's military commission system from Guantanamo Bay to a U.S. prison. But Tribe said, and other advisers agreed, that was "a nonstarter." With lax evidence rules and intense secrecy, the military commissions have been criticized by human rights groups, defense attorneys and even some military prosecutors who quit the process in protest.

"I don't think we need to completely reinvent the wheel, but we need a better tribunal process that is more transparent," Schiff said.

Whatever form it takes, Tribe said he expects Obama to move quickly.

"In reality and symbolically, the idea that we have people in legal black holes is an extremely serious black mark," Tribe said. "It has to be dealt with." End quote.

Yes it is time for America's gulog to be shut down.

I'd like to know what the hell that means- "500 detainees have departed Guantanamo for other countries". Are they released, set free, determined to have been wrongfully imprisoned, or have they been shipped to the "secret prisons" worldwide we have heard about. I'd seriously like to know the details. Are we talking Blackwater? Is the US military involved in further prisoner/detainee activity?

Labels: Shut Down the nightmare of Gitmo

the other- bigger issue- are the secret cia prisons stashed in places like the eastern bloc and africa. many folks don't know about them- and the torture prisons within iraq and afghanistan themselves. we must stop outsourcing torture to the egyptians and poland and just stop it altogether. yes- close gitmo but also close the prisons like abu ghraib that simply got relocated.

When I started seeing lists of many countries, that detainees were being shipped off to, I have to wonder exactly what is going on & if the secret cell prisons are spread out over all those countries.
That batch of 335 all at once, really raised my curiosity.
Obama needs to ask for a full accounting. Where were these prisoners moved to, and what is the update follow up.
This may even be worse than we thought.

There are even kids in Guantanamo.

I had not heard of kids in Gitmo- how dreadful.

I'm just so glad this prison bothers Obama as much as it does us & that was not en empty campaign promise.

Because they offered hefty sums of money for bounties, I am convinced there are many innocents there, which is why we need trials..... you remember-- innocent until proven guilty.

This is deadly serious...it must stop and NOW. I'm watching the movie Rendition. I'm so disgusted I want to take to the streets.

BORDER~ SAW AN INTERVIEW W OBAMA YESTERDAY- HE SAID HIS PRIORITIES INCLUDE GITMO SHUT DOWN, TRIALS, AND THE STOPPING OF TORTURE.

MUSIC TO MY EARS!