For all these years, we've been pulling out our hair & dreading what next with the Bush administration.
But of late I find myself shouting Yay! I swear-- it's like Christmas came early this year!

An "internets" scan of the latest news includes: 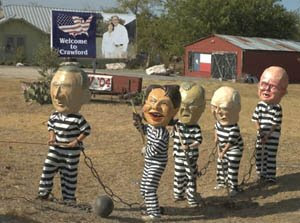 • Obama says no more torture. Yay to the International degree!!!!!

Jeez all this good news, and Obama is not even in office yet.
Posted by Fran at 6:32 PM

Yeaay, Santa did start early this year!!! Let's just hope his elves can keep Bush from effing it all up. The prez who's had more vaca time than any previous prez is all of a sudden hard at work undoing environmental protections, appointing overseer bureaucrats that will not be leaving town Jan 20, comitting the next prez to war contracts, etc/etc. An idiot's work is never done!

Cheney & Gonzales indicted???? I hope this is the beginning of a long & relentless string of legal troubles for that duo.

Alaska is Blue w a Democratic Senator.... take that pitbull lipstick bi-atch, Ha! If Alaskans did not vote the felon out, then the Senate would have had to. That would not have been any way to start a new year with a convicted felon in the Senate. Besides the guy is freaking 85.....2 decades past retirement.

I hear ya on the *bush front*.... go take a vacation & savor the remainder of being a lame duck.

I want film footage of Dick & Alberto in handcuffs.

don't forget, neither Bush nor Cheney can ever go to Vermont (they've been convicted in absentia).

I'm breathing a big sigh of relief about Stevens, not only cuz he's a criminal a-hole, but also because now we won't have to see Perky Palin trying to horn into his Senate seat.

Let's start inauguration day with a perp walk -- a long line being led away from the WH & straight to da pokey!

Yay indeed! And I didn't know that about Cheney and Gonzales! Double Yay!

DK~ Your comment reminded me of the Backbone Campaign's "Chain Gang"-- I added the picture of the pupets... (just for you!)
W, Condi, Rummy , Cheney, and who is the 5th one?? Ted Stevens or Scooter Libby??.... Ah! Put them all in jail...Gitmo style.

Good point about Palin~ we've seen/heard enough of her for a lifetime. Ugh! That winking....yuck!
Sarah: Do us a favor & DON'T get back to us!
Still The Obama admin had better keep a tight leash on her or she will sell Alaska, in the blink of an eye.

Maui~ That is the sweetest news! One of the reasons the Bushies did not want regular trials for Gitmo prisoners, is because the torture & abuse would be exposed.
War crimes = Jail time for breaking International laws.
Let's hope this does open a legal can of worms for the Bush admin. If you sanctioned the crime, do the time. Yay!

Maybe the 5th one is GATES?

Oh how I would enjoy seeing this chain gang for real! I think the 5th one has to be Karl Rove.

That is a statement in & of itself that there would be so many different crooks to choose from.

Is it just me, or does it seem like a very long 60 days left till Obama takes office as president?