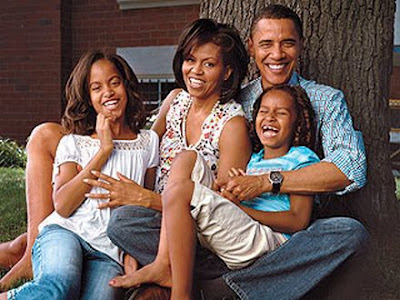 President Obama did an interview & answered questions about the Obama family plan for Swine flu.
He said they would do what is recommended.
Young children with highest risk factors, and pregnant women go first.
Kids are next in line, so his kids would get the shots first, then he & Michelle.

But here is where the Obama's really shine-- he said "We will stand in line like everybody else for the vaccination".

Now you KNOW that is not required of the President. He & the first family could have the first shots if they so chose, without any public knowledge. But they are choosing to make this public, and they are choosing to wait their turn like everyone else. Some may say it is nothing more than a publicity stunt.... but the intent is to encourage people to make a good health choice. The Obama's seem to genuinely make an effort to relate & be with "everyman", the everyday common people, those who will stand in lines to wait. I admire their effort & gesture.

We never saw this kind of action from the Bush family, except maybe for a Thanksgiving photo op. Can you imagine Dick Cheney insisting he stand in line with the general population for a vaccine shot?
Posted by Fran at 5:55 AM

I love it. He is such a good guy and what a beautiful family they are.

he should also be using the opportunity to point out that this is why we need universal health care. if everyone was vaccinated against the flu, we'd all be safer, because nobody would be spreading it around. not to mention how much cheaper it is to vaccinate someone rather than hospitalize them later when they're really, really sick.

Maui~ It is refreshing to have them not consider themselves to be the upper crust in this scenario. Sweet that the kids get vaccines first as well.

Nonnie~ So very true. Wish we had health care for everyone in place before flu season.
That's not gonna happen.