Here comes the sun ~ Or You say you want a revolution 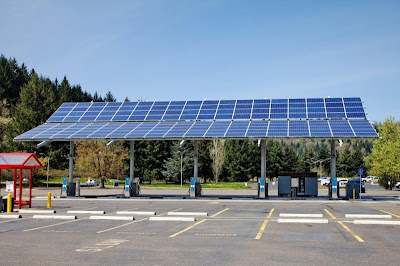 Lane Community College, located in Eugene, Oregon, received a $100,000 grant from EWEB to build a solar-powered electric vehicle charging station for students and the community. EWEB's Greenpower customers voted for the LCC project from among five local renewable energy and education projects.  A grid of solar panels was constructed that has 36 outlets to recharge plug-in electric or hybrid vehicles on the main LCC campus.
This charging station project has created opportunities for students to learn about how to install, repair and service the new solar array.  The college hopes that this solar vehicle charging station will lower the community's carbon footprint, will generate renewable energy, and will help the community learn more about the emerging technology of plug-in vehicles.
It's cool how solar charging is popping up all around Oregon State!  I am looking forward to the day where solar charing is considered ordinary is no longer a novelty. 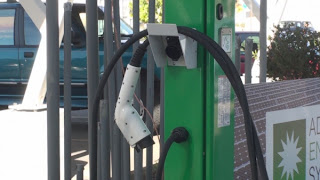 Cafe' Yumm! gets Greener with Solar and EV Charging
10/6/2011On September 9th, Advanced Energy Systems, LLC. Broke ground on the Cafe' Yumm! restaurant located on Broadway Street in Eugene Oregon for construction of a 41.3kW Solar Facility. This unique PV generation project will feature a combination of rooftop solar on the restaurant itself, and construction of a covered parking structure with PV generation and EV charging stations. Cafe' Yumm! has been a leader in sustainability and this project will showcase the Broadway restaurant located near the University of Oregon with green power.
The EV charging facility will include both Level 1, and Level 2 chargers. The PV portion of the project will feature SolarWorld modules mounted on a Sun Storage structure and generate an estimated 45,000 killowatt hours of clean energy per year.

CLICK HERE TO SEE A FILM CLIP ABOUT AN OREGON RESTAURANT'S LARGEST CHARGING STATION IN THE STATE.

A local grocery/department store, Fred Meyer Kroger has joined in with a few charging stations in the parking lot as well:

The Nissan Leaf 100% electric, zero emissions vehicle, that gets 100 miles per charge, has partnered up with

SunPower® – The World's Standard for Solar™

SunPower Corporation produces a rooftop solar power system that generates clean, renewable energy that can power your home charger. we are working with this industry leader to bring solar power to Nissan LEAF™ owners. 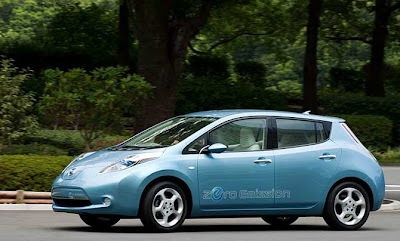 Nissan’s director of product planning, said the cost per mile is 4 cents if you figure gas is four bucks a gallon, electricity is 14 cents a kilowatt hour and you drive 15,000 miles a year. Compare that to the 13 cents a mile you’ll pay in a car that gets 30 mpg. Perry says the car will cost about 90 cents to charge if you plug it in off-peak.

The #'s mentioned above are assuming gas is $4 bucks a gallon. That may soon be history, as oil prices are soaring. CLICK HERE to go to the Leaf's home page, it gets a 5 star safety rating, and great info about the 5 passenger car, with "no tailpipe". By the way the 100 miles per charge works for about 90% of drivers daily commute mileage. Imagine never going to the gas station again!
It is priced @ $27,000 (includes $7500 in rebates), versus the Chevy Volt $40- $47,000 that gets approx 35 mpg on a charge, but has a back up gas engine. The $7500 in rebates apply here too, if offered in your area.
From Chevy Volt's web site:
Volt is unique among electric vehicles because you have two sources of energy. You have an electric source–a battery–that allows you to drive gas–free for an EPA–estimated 35 miles. And there's also an onboard gas generator that produces electricity so you can go up to a total of 375 additional miles on a full tank of gas.

My    My problem with GM is, even after having to file for bankruptcy, & having taken a huge government bailout, they come back in a known difficult economy with a very expensive car. They made one of those epic bad decisions (like the people who sold the  Coke recipe, and those who told the Beatles boy/guitar bands were out, and the dozens of publishers who turned down J K Rowling, saying the Harry Potter story was too complex for kids. ) GM had the EV electric vehicle, lease only-- but decided to scrap them- even though people who drove them begged GM to keep the vehicles.
As a result, when gas topped $4 bucks a gallon, GM was top heavy w gas guzzling SUV's, and Toyota dealerships were struggling to have enough Prius Hybrids to sell.

If the Volt is really just an electric hybrid, it is still much more expensive then other hybrids- the Prius is getting 56 mpg city. Burning fossil fuel, granted, but $10 to $20 K less expensive. With GM's financial fall, they should have had a clue about the need for affordable vehicles. Now the Volt has a bursting into flames issue.
GM may have gotten bailed out financially, but no one can bail them out from their own stupidity. 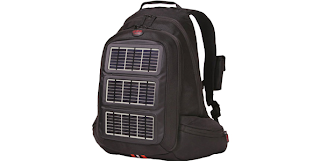 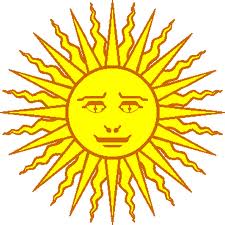 The biggest deal, is that this is *people power driven*. As gas prices are more like highway robbery, and we know the CO2 emissions are doing damage to the only planet we have, people are voting with their dollars. Because really, are we going to wait around for politicians to agree to do something? Seems to me the only thing they agree upon is war funding. They show up for the ribbon cutting photo op, but by now we should have a solid infrastructure for solar powered electric care charging stations. Why have we not made the change to solar-- I suspect because there is not ongoing profit. because no other reasoning validates it. So cheers to the Stars who show up on the red carpet in a Prius & not a limo, and to these pioneers who are putting in charging stations.
Screw the government whose recent best move environmentally, is to jerry rig the Keystone pipeline to Texas, carting dirty tar sands oil, to make more pollution to refine, so we keep this oily addiction flowing. That and requiring 35.5 mpg standards by 2016. Notice how they project this "goal" further down the road & past their own term in office? Bush 2 did it & so did Obama. That way they can claim they "took action" without actually doing anything.
How much you want to bet the auto mfr's cry wolf hardship, and ask for an extension, because times are just too hard to make such changes.
Blood oil, environmental responsibility, price gouging, limited resource, and let's not forget the whole BP Deepwater oil well disaster- we have more than enough reasons to bail off the oil fix.
Essentially, don't wait for a leader-- be one.

The U.S. oil companies -- you know, the companies who receive $4 billion is U.S. taxpayer subsidies, have posted record profits for years now.

I have no problem with profit. In fact, profit is why a company exists.

However, why hasn't Barack "green energy" Obama urged Big Oil to invest a quarter of their massive profits into alternative energy sources or risk those same profits being taxed at 90%?

Great question-- Obama made the comment that big oil as doing just fine-- they don't need subsidies. But we all know that would be just another reason to raise gas prices.

The only way we are getting off the grid is for us to do it ourselves.

Finding a plug-in vehicle charging station through Google Maps couldn't be any easier. Users need only type "ev charging station near _____," inserting the name of a U.S. city or area in the blank.