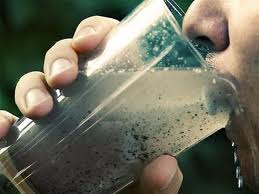 Oh get your mind out of the gutter! Presidential asspiring (typo intended) Michelle Bachmann likes the planet dirty. She'd like to abolish the Environmental Protection Agency, and recently said she's open to oil drilling in the Everglades of Florida:

Presidential candidate Michele Bachmann has reignited an intense debate over energy exploration by calling for oil drilling off the shores of Florida and in the Everglades.

The Republican tea-party favorite, who blames "radical environmentalists" for blocking access to energy supplies, said the nation needs to tap all of its resources when — and wherever — it can be done responsibly.


The Everglades is the source of fresh, clean drinking water
for more than 7 million Floridians.
In classic form though, Bachmann quickly threw in a hail mary (save your ass) addendum to that thought:
Bachmann said experts would need to certify that the drilling could be done safely. "No one wants to hurt or contaminate the Earth," she said.
Yea well, apparently someone wants to hurt & contaminate the earth, but abolishing the EPA.
As far as her hatred of the EPA, Bachmann said its regulations "kill jobs" and that the agency doesn't really seem to care about that in these days of 9% unemployment.
Bachmann stresses that this doesn't mean she doesn't care about the environment.
"If we create a new department that is focused on conservation and get rid of the EPA, that would send a strong signal about what our priorities are. We believe in conservation, but I also believe at the same time that the EPA has overstepped its bounds."
Think Progress states:
"Conservatives hate the EPA because it slaps their corporate donors with rules and fines -- those fines, of course, result from those corporations endangering the American public with pollution emissions and discharging toxic chemicals into drinking water and air. 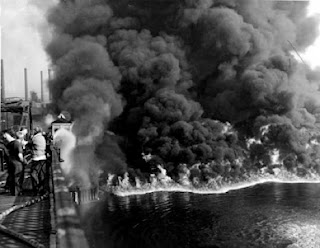 Cuyahoga River, Ohio, on fire
Thankfully, the majority of Americans understand that the EPA provides a service no corporation can (or will), and that due largely to its "job-killing" regulations, our cities and waterways are immensely cleaner than they were before it was founded 40 years ago.
It's kind of hard to paint as the boogeyman the organization that successfully kept rivers free enough from pollution so they stopped catching on fire."

Re the Cuyahoga River fires:
"The fire was a bad thing, sure, but some good came out of it in the end," said Jane Goodman, a South Euclid councilwoman and spokeswoman for the river planning group. "Many people see this fire as being a catalyst for the federal Clean Water Act and other environmental laws."And those laws went a long way toward bringing the river back."

Bachmann would like to take us back to the dark & dirty ages.
What good is a job, if the toxins & pollution kill you?

she should be forced to drink tap water where fracking is going on.