I was wondering how they name hurricanes.... 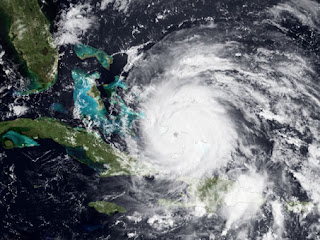 PHOTO: HURRICANE IRENE 2011
Have you ever wondered about the system used for naming hurricanes? Where did those names come from, anyway? Will we have to suffer through another "Hurricane Andrew"? The system is not that complicated.
Hurricanes used to be designated by a system of latitude-longitude, which was a great way for meteorologists to track them. However, once the public began receiving storm warnings and trying to keep track of a particular storm path, this got very confusing. A system of names to refer to them was much easier to track and remember.
In 1953, the National Weather Service picked up on the habit of Naval meteorologists of naming the storms after women. Ships were always referred to as female, and were often given women's names. The storms' temperament certainly seemed female enough, shifting directions at a whim on a moment's notice. In 1979, male names were inserted to alternate with the female names,to the delight of women's-libbers everywhere.
There are actually six lists of names in use for storms in the Atlantic. These lists rotate, one each year; the list of this year's names will not be reused until 2017. The names get recycled each time the list comes up, with one exception: storms so devastating that reusing the name is inappropriate. In this case, the name is taken off the list and another name is used to replace it; there will not be another Hurricane Andrew, because Andrew has been replace by Alex on the list.
A storm must start as a Tropical Depression and move on to become a Tropical Storm before it is given a name. Once a storm is named, preparations for the possible hurricane should be well under way. Without further ado, here is the list of hurricane names for 2011:
Arlene
Bret
Cindy
Don
Emily
Franklin
Gert
Harvey
Irene
Jose
Katia
Lee
Maria
Nate
Ophelia
Philippe
Rina
Sean
Tammy
Vince
WhitneyOne question I've heard a lot recently is "What happens if we run out of hurricane names?" If we're unlucky enough to deplete the year's supply of names we won't, contrary to popular opinion, simply start using names from next year's list. In that case, the National Hurricane Center will turn to the Greek alphabet and we'll have Hurricanes Alpha, Beta, Gamma, Delta, etc.
So there you have it. How they name Hurricanes, courtesy of About. com