Joining the ranks of the Jobless 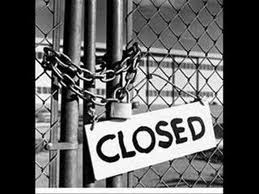 Here we go again. A few years ago, the husband's workplace filed for bankruptcy, and closed down the entire plant & pink slipped 2000 workers. They had another company buy them out, but kept the same people at the helm who ran it into bankruptcy (they also managed @ the time of the peak heyday, but that was in different economic times).
Once again they started having manufacturing shut downs, and just did a wave of 60 production worker lay offs. We know this to be a red flag of troubled times, we've seen this pattern before. Today they announced that the company would shut down the Oregon facilities entirely, and move it all to Indiana.
Previously, they shut down the Indiana plants & moved it all to Oregon. In any case, they expect the shut down to happen in a matter of "weeks", not months, but for sure by the end of the year.

Oh hell.
There goes the main breadwinner of this family's job, his & the son's health & dental insurance. This county is in deep trouble, as we are facing a slew of other mass layoffs-- the school district just shut down 6 schools, which is a huge volume of people to put into the jobless realms.

Don't know all our options yet, but damn.
Posted by Fran at 2:53 PM

damn. so sorry to hear this. i hate these corporations. there is no such thing as employer loyalty anymore. they'll throw employees under the bus without a second thought.

Damn, dumb, management sumbitches. Instead of yo-yo-ing operations twixt Indiana and Oregon and back again, they ought to just move their operations off-shore, i.e., Mexico, Bangladesh, or some other 3rd World cheap labor nation. (Not to fear, we'll soon prove a cheaper labor market than any of those!)

So sorry to hear this, Fran. Does it help any to know you're in a growing majority of Americans?

Ahhhh but in this topsy turvy corporate world, this story has a positive twist;

The Indiana Economic Development Corp. offered the corporation up to $2.8 million in performance-based tax credits and up to $125,000 in training grants based on the company’s job creation plans.

The corporation gets millions in tax breaks & incentives (there are more than what is in the article).
They dump 450 workers. And how could all this get better?
How about paying the new workers an even lower wage?

Desperate times yields cheap labor.
But it is probably just a matter of time before they dump them & find an even cheaper way to increase the profits.

Any chance your husband could follow the plant to Indiana to keep his job?

We know a couple who went to work for Dell Computer. They relocated to Austin, TX against their better judgment and five years later, Dell moved their manufacturing to some shithole in Tennessee because the state gave them so many perks.

There's a huge disconnect at work here. Obama and the GOP says we have a spending problem. I say we have a revenue problem. But Obama extended the Bush era tax cuts on the rich.

Back to your husband, can he take early retirement? Would this be doable?

Hey Christopher~ Frankly, the place in Indiana is kind of the armpit of mfg. Just some simple sleuthing of the region has me saying No way.
How about 18.8% unemployment rate?
82 inches of annual snowfall.
WE are somewhat spoiled in this Pacific NW college town & we like this zone. Not willing to be in the midwest, plus-- similar situation that there is no telling if the company just dumps that place for the next better tax inventive or to head for the border & hike their profit margin by doing business in Mexico or who knows where. There have been too many dumps of employees to feel this is a viable option anymore.

Tax cuts for the rich suck when the country is in such need.

The husband too young to retire.