I hate the pageantry

BREAKING NEWS: PRESIDENT OBAMA IN DOVER FOR RETURN OF BODIES IF 30 U.S. SOLDIERS KILLED IN AFGHANISTAN. 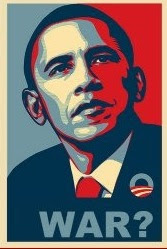 I don't mean to disrespect those who lost their lives. All of them, soldiers & innocents. I am sure the loss is a personal tragedy that will change the lives of their families forever.
But I am sick of the pageantry. The laying of wreaths. The flying to Dover. The salutes.
The speeches about the noble cause.

Come to think of it, that question asked by Gold Star (deceased soldier's) Mom, Cindy Sheehan;
What is the noble cause?

10 years later, and we still don't have an answer.

I voted for this president, because I seriously hoped for change.
Surely we would shut down these wars, and realize they were bankrupting us both morally and financially. But no.
Our breaking news today is the shallow "honoring" of the deceased soldiers, returning home.

I sincerely hope they rest now, in peace.

But if the president really wants to honor the troops, he should bring them home, alive. Now. 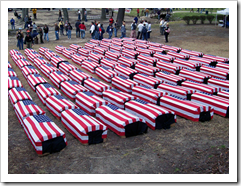 We've reached the point with Obama that when he appears on TV, an increasingly rare event, like a sighting of the snowy Egret, one of us turns the TV. We can't stand the sight of his face or the sound of his voice.

Remember, this Nitwit told us back in 2007 and 2008, he would end both the Afghanistan and Iraq wars and what has he done as president?

And don't even get me started on Libya and Yemen and the 120 secret, covert wars Obama has approved since that awful day he became president.

Obama MUST go. We can't survive another four years of this clown and his Goldman Sachs bitches like Geithner.

There is a long list of "Fails" on Obama's promised to do list, but the extended & increased war situation was something he really could have chosen to do something about, instead he kept many if G.W. Bush's military men at the helm, and proliferated more wars.

Let's face it-- military expenses are the elephant in the room when it comes to the budget crisis.

His speech about "the risks the soldiers take" is the same as him pushing someone in front of a bus & then saying he mourns the loss.
Stop putting the troops in harms way & then we won't have to be having funerals & be bankrupt.