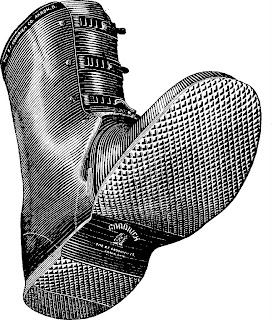 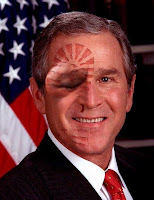 You've probably seen and or heard about it by now. The incident of the Iraqi reporter throwing a shoe, no-- BOTH his shoes directly towards George W. Bush's head. It is a high insult in Middle Eastern culture, and it was said to be for the Widows, Orphans and those who have died.
Later, United States president, George W. Bush, asked," What's his beef?"

We the People of the United States have a long list of "beefs"- more accurately, list of High Crimes and Misdemeanors, that are by U. S. law considered to be Impeachable offenses. A very long list, of very serious offenses. 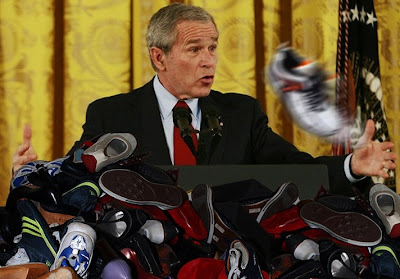 How about a shoe, I mean show- of solidarity?

What better way to have a Nationwide action that involves a symbolic throwing of shoes?
Grab a pair of shoes & send them to George, as a kind of departure from the Presidency legacy gift.

Visit msnbc.com for Breaking News, World News, and News about the Economy

Hundreds of thousands of shoes arriving as a nationwide farewell. 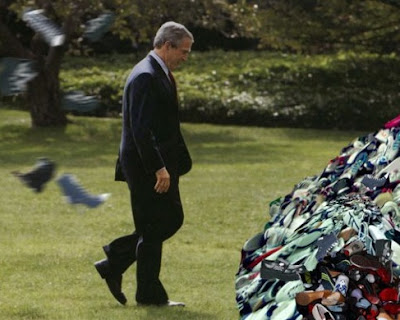 Yes there are a number of throw shoes at Bush games on the net.

Labels: Ain't that a kick in the head, The US has got "sole"

Well, we're thinking along the same lines. I don't know the details of inauguration day, but I was daydreaming - if Bush takes a limo to get there - how nice it would be to pelt his ride with thousands upon thousands of shoes.

I later rejected that because it would probably slow his arrival to his final official act as president, the peaceful passing of the power, resulting in prolonging just a bit 8 long years of national misery - that is, assuming he doesn't just decide to declare a national emergency, call out the guard and reserves, institute martial law as he suspends the Constitution and declares the Nov. election null and void.

Hi Dada~ Yes the shoe theme is a befitting farewell.
I would not be surprised if Bush's ride does get some flying shoe action- but you are right, let's not prolong his reign. Plus you don't want to give some Homeland Security thug a reason to bash your head, and accuse you of felony inciting of riot charges.

Instead we can simply mail our footwear in to let George know where we stand.

Now there is a news piece I would love to hear....
the flood - mountain of shoes arriving at the White House!

Let's be sure to encourage friends.....

Excellent plan. I have a really past-its-prime clodhopper which has been desperately searching for its raison d'etre.

In the middle east, one is not even supposed to POINT one's feet in the direction of another while sitting since the theory is that one is throwing the dirt (or dirty energy) of the world at another, feet being dirty. Pile up the shoes around Bush and let the fun begin.

Lulu~ Let that clodhopper fly! I am for sure going to send a gift to the decider as well- please do encourage friends.

Maria!!! I've missed you- sorry you were wiped out with the flu for so long.
Amen Sister! Let the fun begin.

Those vid links you posted had a good satisfying solid THUNK when the virtual shoe hit the virtual head. Fun!