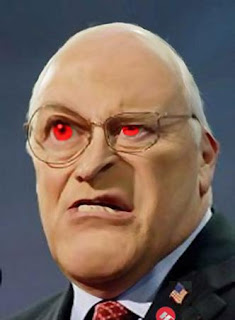 "Cheney claims power to make decision on his public records"

Yes, Vice President Cheney still maintains the delusion that he can change the rules and laws of his position. Old Dick once declared the Vice Presidency to not be a part of the Executive Branch of government, therefore did not have to abide by those rules.

Now sure-shot Dick has lawyers arguing that he alone has the authority to determine which records, if any, will be given to the National Archives, when he slithers from his undisclosed location, in January.

Christmas may have come early, because Cheney is being sued in Federal Court, by Citizens for Responsibility and Ethics in Washington.

*Reported by the Register Guard. 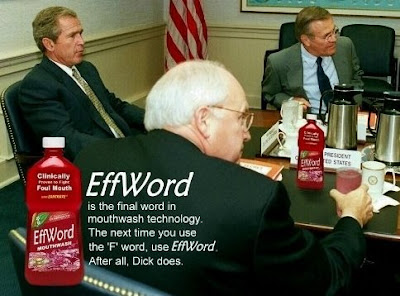 Of course Cheney does not want to have to turn over his records. He felt so safe and secure in his undisclosed location, cutting behind the scenes deals. Cheney has been the most unseen or heard from VP in history. The only time we hear from Cheney, is when he comes out to do the occasional fund raiser. The Bush/Cheney administration has been so awful, most republican politicians did not want to be associated with them. Neither Bush or Cheney made an appearance at their own party convention! Bush claimed to have been busy overseeing the hurricane in the Gulf, and arrogant Cheney did not even make an excuse. Not only are they unpopular, but I think those 10,000 protesters in the streets near the Republican Convention might have had an effect on Bush being advised of the throngs of non-supporters, and to stay away for his own safety.

This is yet another act of lawlessness and disregard of playing by the rules by Cheney.
I hope the justice system does it's job. And don't leave a shredder in the undisclosed location.... it might overheat & catch fire.
Posted by Fran at 7:02 AM

Cheney is a very scary man. He really does believe he is above the law.

Maui~ totally agree, the man has skated through so many questionable, if not outright illegal activities....
the paperwork in question sheds the light of day on what he did all those years.
I'm glad he is being sued, and I hope he is nailed.
At some point justice must prevail.