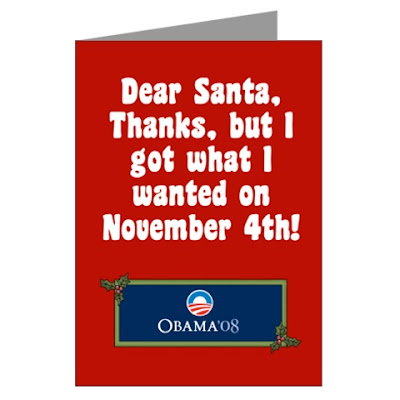 Time magazine named Barack Obama Person of the Year. They said Obama really does not want accolades, truth be known his first 100 days started November 5th, when he spent 5 hours in meetings to begin the work as President.

"For having the confidence to sketch an ambitious future in a gloomy hour, and for showing the competence that makes Americans hopeful he might pull it off, the president-elect is TIME's Person of the Year," the newsweekly said.

Asked about the state of the economy, Obama said "I think we should anticipate that 2009 is going to be a tough year.
"And if we make some good choices, I'm confident that we can limit some of the damage in 2009 and that in 2010 we can start seeing an upward trajectory on the economy. "But this is a difficult hole that we've dug ourselves into."


Unbelievably, Treasury Secretary Hank Paulson was the next runner up- maybe for Bush lackey screw up of the year award.... but certainly not person of the year!
Posted by Fran at 11:42 PM

Now that Jim's graduated from Nursing school and Obama was elected president, there isn't a material thing I want or need.

Of course, if Jim brought home a Mercedes 500SEC for me for Christmas, I would faint but I'll have to wait a few more years until he pays off his student loans for such a gift! LMAO!

I was so relieved we did not have a stolen/corrupt election. Glad Obama won, but also thrilled that McCain & Palin LOST. That duo scared the hell out of me. No more just hoping for change.... we can count on it- and we desperately need it.

The thing we want, Santa can't bring-- employment for Mr. Ramblings. He may in fact return to work on 1•5•09, but the company is on thin ice, after 30 years of being in business.

Congratulations on graduating from nursing school to Jim. Does he have a 2 or 4 year degree?

He has a BA in an unrelated field.

His Nursing degree is an AA. Now, he will let his new employer pay for him to get his BSN. It's a really cool program where the university comes to the hospital and the RN's take the classes on site.

I'm tell you, this Nursing profession is unreal. I'm beginning to think I should become an RN!

Christopher, I've been trying to talk my nieces into pursuing nursing for years, but they showed no interest. I kept telling 'em it's a growth industry, what with a bunch of decrepit old boomers who plan on living forever (ok, just speaking for myself). So ... one goes for an English Lit degree and the other is pursuing a Librarian degree. Ah well, I tried.

Fran, I'm glad Time finally recognized an obvious Person of the Year (remember it was Putin last year). Obama is it! I think the number #2 Paulson was just a joke. #3 was Palin (accckkk, hide all your pets & run for the hills)! Jeez, who threw those two so far up the ladder? I'd sooner have seen Hillary as #2 or 3. ooops, did I just say that?

DK at least they did not choose Cave Dweller of the year- Dick Cheney, (how will we know if he's actually left? He might stay holed up in that undisclosed location forever & we'd never know!).

Anyway, it must kill Palin & Johnny McLame to see the big O in the highest position.... gosh, we smeared every nasty name we could call him & he still won... after palling around with terrorists!! Hrumph!

You are too funny with the remark about hiding your pets from Palin....

The opportunities are endless and the jobs are found in every state, from large cities to small towns.

And the money is excellent.

Seriously, I'm really thinking about taking a biology course and applying. I have a BA already and it hasn't done squat for me in this economy.

Remember, Person of the Year isn't always positive. They're just "influential." Hank Paulson does qualify in that regard!