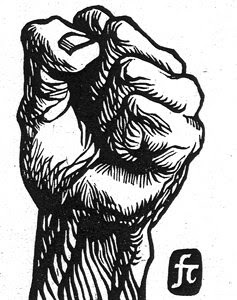 The BBC is reporting today that the shoe thrower has allegedly been beaten while in custody. Al-Zaidi’s brother Dargham has reported that he has suffered a broken arm, broken ribs, and internal bleeding. “The only thing that will hopefully keep al-Zaidi from being swept up into an anonymous prison for an indefinite period, and even tortured, is the huge outpouring of support he has received the world over,” said Medea Benjamin of CODEPINK.
Al-Zaidi has received widespread attention and support both across the Middle East and the U.S. From protests across Iraq to widespread coverage in U.S. news to spontaneous groups on Facebook.
CODEPINK has begun a PETITION for people who agree with the anti-war sentiment behind al-Zaidi’s shoe-throwing action and call for his release without charge. The group will also visit the Iraqi Embassy in D.C. this afternoon to demand al-Zaidi’s release. On Wednesday, CodePink and other antiwar groups will gather outside the White House to display shoes representing the Iraqis and U.S. soldiers who have died since the Bush Administration’s invasion of Iraq.

The Ambassador says "What Mr. al-Zaidi did was reprehensible"
The lady in the audience replies...."What about what Mr. Bush did?"
Posted by Fran at 6:22 AM

Al-Zaidi is a hero of many nations. He has bravely expressed a message from the hearts of freedom and justice loving people around the world.

I rank him up there with the Chinese man who stood up to the column of tanks.

And as a journalist, he struck a courageous long overdue retaliatory blow for a free press against an enemy of truth and peace.

Bravo Dave-- great comparison.
He will be forever remembered for this symbolic act.

I hope they set him free & soon

I saw something today about an al-Zaidi statement begging for release and forgiveness for his "ugly act". To me, this means he has indeed been beaten up pretty badly. Just like our POWs (McCain at the top of that list) all had to record or write official apologies, which they only did after being tortured. If Bush had any sense of diplomacy, he'd have pulled strings to al-Zaidi out, using the democracy & free society bait.

And YEAH, WHAT ABOUT WHAT Mr BUSH DID? How does one flying shoe stack up against hundreds of thousands (minimum) killed in an illegal war?

I f we take into account what Mr. Bush did, many more shoes should have been thrown.

he is indeed like Tank Man...I do hope that he is freed soon...he should not suffer for speaking the Truth....or being brave...