GM - IN THE DITCH 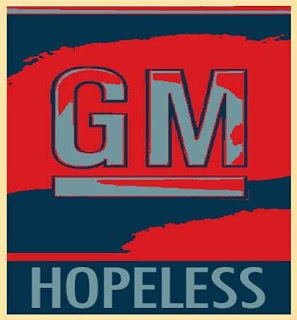 It's not looking good for General Motors.
The bondholders rejected an offer of $324 for every $1000 they were owed.
However, if  (when?) GM does go into bankruptcy, the source said that Treasury believes the bondholders would likely get even less than what was offered.
"In any kind of liquidation scenario, they would get nothing or something unbelievably small," said the source.

It's really too bad  GM, a company that has been in business since 1908- 101 years is on the brink of bankruptcy.


I came across this tidbit in wiki:

"General Motors is the best selling foreign auto maker in China. The Buick brand is especially strong, led by the Buick Excelle subcompact. Cadillac initiated sales in China in 2004, starting with imports from the United States. GM pushed the marketing of the Chevrolet brand in China in 2005 as well, moving the former Buick Sail to that marque. The company manufactures most of its China-market vehicles locally, through its Shanghai GM joint venture. Shanghai GM, a joint venture between the Chinese company SAIC and General Motors, was created on March 25, 1997. The Shanghai GM plant was opened December 15, 1998, when the first Chinese-built Buick came off the assembly line. The SAIC-GM-Wuling Automobile joint-venture is also successful selling trucks and vans under the Wuling marque (34% belongs to GM).
GM plans to create a research facility in Shanghai for $250m to develop hybrid cars and alternative energy vehicles. This move has been criticized because it pushes outsourcing to the very limit."
We have seen the Airlines go into bankruptcy & recover- i.e. still in business, but I don't know if GM/USA can recover. I don"t know if those Federal Treasury "loan" monies will ever be seen again. Chrysler's bankruptcy reorganization seems to be going well, but that may be a false indicator. So many dealerships were shut down & they must sell off their inventory. If consumers think they can get a hot deal on a new car, they will buy. But GM is more complex. Neither of them have it together on the "green technology" aspect, and in order to get bailout money, GMAC (the lending wing of GM, dealing not only in cars, but mortgages as well), was declared a "bank". The whole GM & GMAC package is much more complex than Chrysler. Things are heating up with General Motors...

On one hand so many jobs were on the line for the auto industry to fail would have a huge impact, and I really did not want to see the worker bees take the financial hit.
Kind of a magic act....

GM is now working on pulling some kind financial rabbit out of the hat trick.
In order for us to understand it, they have broken it down like this:
Old GM/New GM Good GM/Bad GM. The bondholders have until Saturday to approve or reject the plan. If they reject it, Old GM basically goes out of business.
Dead On Arrival???
About 20% of the bonds are held by small investors who probably do not have a chance to reply by the deadline. GM had previously said it needs approval from 90% of these creditors in order for any offer to take effect.
GM faces a June 1 deadline to make $1 billion in interest payments to its bondholders, money the company says it does not have.
Old GM: The old GM would also technically receive the right to buy the 15% stake in the new company that emerges from bankruptcy.
New GM: The assets of GM that would remain in bankruptcy would receive a 10% stake in a "new GM" that would be used to pay bondholders. Workers get a piece of the pie ~ A trust fund run by the United Auto Workers union would also have a 17.5% stake in the new GM.
Good GM: As part of such a filing, GM would emerge with only its more profitable plants, brands, dealerships and contracts.
Bad GM:GM's unprofitable plants, contracts and other liabilities that the company can no longer afford would be left behind in bankruptcy court. Buh bye Saturn, Pontiac, Hummer. Saab, Opel,
I'm adding Two more categories--
Screw the Taxpayers GM: The filing also disclosed that GM will not repay the loans it has already received from the government or any additional federal aid it will get as part of the bankruptcy. When all is said and done, total assistance to GM is expected to reach nearly $40 billion.

High Stakes GM: Instead, the government will convert that debt into a 72.5% stake in the new company. This means that for taxpayers to make back any of the money loaned to GM, it will have to be because shares of the new GM increase in value following an exit from bankruptcy.

* Various CNN news articles were used for the reference info. 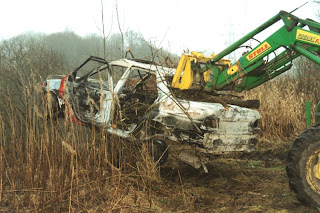 But GM had made a series of bad choices.... from literally destroying their lead in the Electric car market, to being top heavy in gas guzzling SUV's when gas was the most expensive ever. I worked in the finance wing of GMAC for 4 years. Their whole focus was making money for the Shareholders. I watched then systematically pull the plug on Union staffed (financial) field offices, one by one, until they finally even shut the doors on the non-union Customer Service people, moving that part of the business to *India* a few years ago. So when I see their "rally around America" commercials, I am soured on their false patriotism. They as a corporation did not rally around America as they shipped jobs to whatever cheap outsource out of America,  they could find.
If we use a car wreck as an analogy, GM is in the ditch. I'm not sure the jaws of life can save them in time. 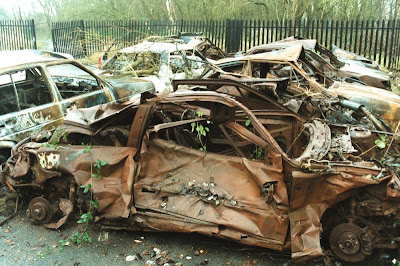 Labels: GM~ In a Wreck

It's too bad that American auto makers never made any effort of take a lead on MPG, hybrids, or other cutting edge technologies. They seemed content to give us crap at high prices. I've never owned an american car until now, but the one I bought last year is 26 years old and has 86,000 miles on it. Since it's a Dodge Caravan, it gets shitty milage, but in the year I've owned it I've filled the tank twice. Just goes to show you I don't travel far from home.

Bastards. But that's what's wrong with capitalism... all about the investors, and everyone else be damned.

Now look at the investors. The formula's been off for a long time, and here come them chickens, home to roost.

When I watched "Who Killed the Electric Car?" I went nuts.

Bastards. But that's what's wrong with capitalism... all about the investors, and everyone else be damned.

Now look at the investors. The formula's been off for a long time, and here come them chickens, home to roost.

When I watched "Who Killed the Electric Car?" I went nuts.

Utah~ They missed the boat for sure.

Lulu! Hey hope you are on the mend.
That film "Who Killed the Electric Car?" was well done. I loved their "protest" held as a formal funeral at a cemetery, mourning the death of the EV1.

Damn! Even GM's Wagoner later admitted if he could go back in time, they would have kept & improved the electric car.
That was one of those fatal decisions..... kind of like the record label that turned down the Beatles... telling then guitar bands were not popular anymore.

The crux of that scene was that they purchased the patent on the better electric car battery.... only to never use it. That was the key element that would have made it a huge success.

Back in the day, they were still in bed w big oil.
Hurmph-- not only is the honeymoon over....
but it's an ugly divorce.

Event to this day, you 'd think they would have just put the EV1 back in production.... but they are talking years till they roll out the VOLT & at a crazy high price.... like as if they have years..... or this economy will lend itself to crazy high prices.

They STILL don't get it, which is why I wonder if they will survive the bankruptcy.

Plus I did not appreciate them plucking jobs from here to buy cheap labor in India.
Which is why their patriotic ads really piss me off.

Notice they don't have ads saying India! Put on your rally caps!!!

Dear General Motors: Get a clue.