Another day in Palin's "Paradise" 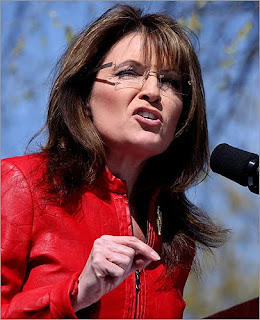 KVAL (Local CBS Affiliate) received this press release Friday from Paradise Media:
What: Former vice-presidential candidate and Alaska Governor Sarah Palin addresses Lane County Republicans at the Lincoln Day Dinner in Eugene.
Where: Eugene Hilton, main hall, 66 E 6th, Eugene, OR
When: Friday, April 23, Governor Palin is expected to begin speaking at 7:50 PM.
Media Access: Media representatives will be allowed to view Governor Palin’s speech via a live video feed at the Hilton.
Restrictions:  One media representative from each news organization will be allowed to attend.  No cameras or recording devices will be allowed.  Still photography pictures will be available of the event which may be downloaded following the speech.
The media restrictions of this event are due to contractual obligations dictated by the booking agency.  Governor Palin will not be available for any pre or post-media interviews.
Another local station posted this comment from a viewer:
"I just think that she really doesn't know what she's talking about, and I think she says things to get people riled up," argues Cari Stubbs, who is anti-Palin.
The one element though in the mix that some are questioning is that the media will not be able to photograph or record the event. They'll be limited to taking notes and viewing the speech from a separate room. No interviews before or after the event are allowed either.
"She probably wants to be able to control whatever is edited," speculates Stubbs, "so that, if she says something and looks like an idiot, they'll be able to edit it."
Speech organizers say they are worried about the backlash from the media being shut out, but they say the situation is up to Palin's tour manager.
At this point, if you do not have a ticket to the event and want to go, you'll have to watch Palin from the same separate TV viewing room as the media. Tickets are $100 and include dinner."

So the former half-term governor who quit is carrying on with her COUNTRY FIRST $12 million dollar money tour/campaign, taking in hefty speaking fees, and what is more fun, because she is no longer a public official, she is not obliged to disclose her Public servant salary money grab. Palin can play this "contractual obligations dictated by the booking agency" game for so long. My bullshit-o-meter is in the red zone. Palin is not doing interviews because she can't handle questions without someone giving her the answers.
Sure she can deliver the rhetoric.... but even then she needed crib notes.

Will I be paying $100 bucks to listen to the Shrillah' from Wasilla deliver her schtick?
There's not enough Tums in the world to quell that kind of indigestion!
Posted by Fran at 9:57 AM

The local news announced since Palin is no longer a Government official, she will have to pay for her own amped up security. they will have extra police on hand in case protesters get unruly.

How about that name "Paradise Media"-- paradise for Palin, gosh, they say no interviews.
Has Sarah lost her freedom of speech???

anyone who pays even a penny to this moronic shrew deserves to get ripped off.