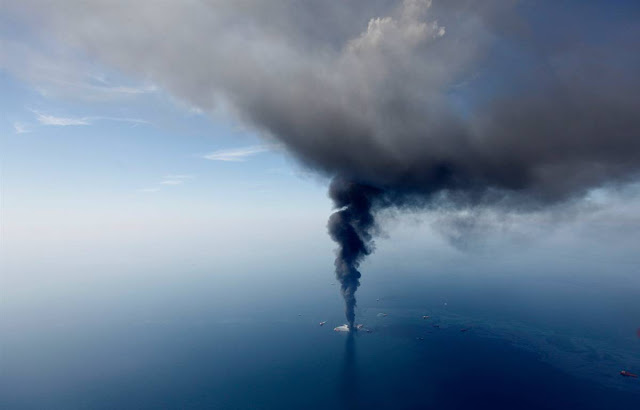 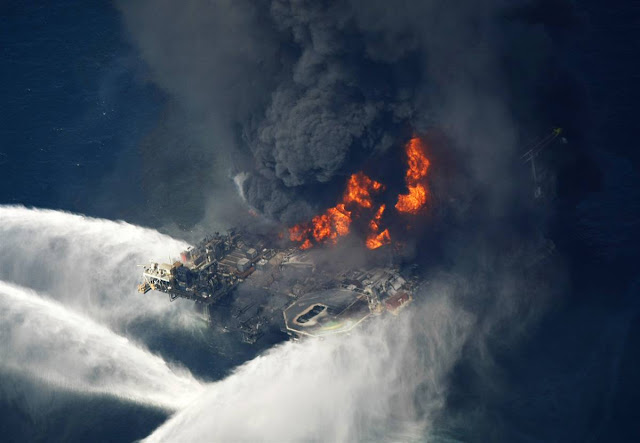 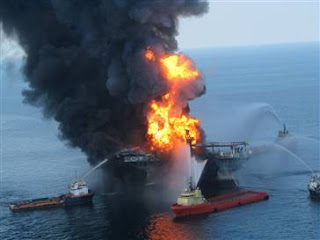 Call me cynical or a realist- whatever- I don't care how many "feel good" commercials they run about safe clean coal, and the Drill Baby Drill mantra of the GOP, even President Obama, giving an OK on offshore oil drilling- it is dirty and dangerous.
29 coal miners were killed, and now 11 oil rig workers are "missing". Of the 17 injured, 4 are in  "critical" condition.
The rig is still burning & the company itself calls it a "catastrophic explosion." The platform itself is listing, but the company expects it to not topple over. They probably did not expect it would have a catastrophic explosion either. Crude oil is spilling in to the ocean, as well.

UPDATE:
The platform did sink on Thurdsay. The good news is that put out the fire. The bad news is:
The well could be spilling up to 336,000 gallons of crude oil a day, the Coast Guard said, and the rig carried 700,000 gallons of diesel fuel. What's not clear is if the crude is still spewing below the surface. Coast Guard Rear Adm. Mary Landry said crews saw a one mile by five mile sheen of what appeared to be a crude oil mix on the surface of the water.

Between "safe & clean coal & offshore oil drilling", it appears that 40 people lost their lives recently, not to mention the environmental damage done.


The following photo is also a part of the aftermath of the explosion. Sludge samples are taken from a nearby waterway. Drink anyone? 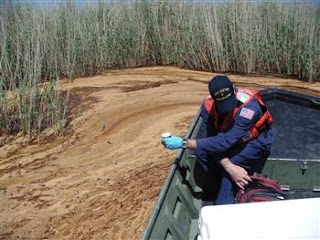 Just to include something more positive re Earth Day, I am enclosing this video...
Hat tip to the Skippy the Bush Kangaroo blog
BEST VIEWED FULL SCREEN
Posted by Fran at 12:50 AM

i saw on the news that the entire thing has sunk, and there is already a lawsuit filed on behalf of one of the missing workers. when the mining disaster happened, the guy from the union said that the problems were not only in non-union mines, but in all non-union energy jobs. unfortunately, it didn't take long for him to be proven correct.

nonnie~ The impact is heavy.
Union or not, these kinds of perils are inherent in these industries.