Not my cup of tea or Palin needs a realistic title. 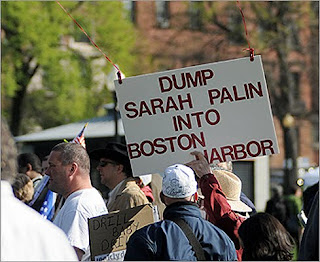 The Tea Party Express came to a halt this week , as they ranted about taxes, and the Government. Sales were brisk, for vendors selling "Don't tread on me" flags, and the rhetoric raged on.  There is nothing new & exciting about all this. Republicans have always made political speeches about keeping taxes low (Read my lips), but historically have always raised taxes, and have been the biggest spenders, putting us in the deepest debt. Yet the masses like to hear the promise of lower taxes. How is it they are able to make & break the same old promises again & again?

Meanwhile the Obama administration actually did make tax law changes that has provided relief to much of the middle class.  The Tea Party can't be bothered with facts!  Nobody likes paying taxes, but for the greater good, that is how things work. Dare I mention Socialist programs like the Fire & Police departments, Public Library, Education,  Running Water, Roads, taxes pay to fund these items. Yes, even the Tea Party folks can partake in these Socialist offerings if their house is on fire, or they need an ambulance. 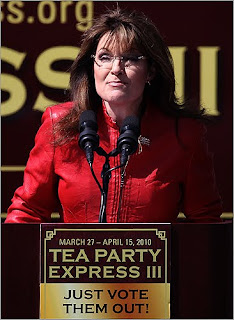 Anyway, the Tea Party can have Palin, the snarky quitter who is introduced as the "Governor of Alaska", just that intro alone gives me the heebie jeebies because she quit the job. "Failed Governor of Alaska" would be more honest, or "Lady who could not handle the job of Governor", or "The Mayor of Wasilla who tried to be Governor, but quit mid term". It just seems wrong to announce her a "Governor Palin" since that organiz-ey, accountability thing did not work out for her.

I don't get the appeal. Palin in her red leather jacket & rhinestone U.S. flag pin are here to change the country? Palin is the best they have to offer? A proven loser, who is hungry for power and political popularity. We don't even see Todd on these tours anymore. Maybe he is staging his own personal, "Don't Tread on Me" campaign against Sarah? I don't know who is taking care of Palin's special needs baby, but clearly, it's not her.

At least they changed the battle charge from "Don't retreat, reload", to "Just Vote them out".
Better yet, don't vote them in! (the Tea Party & Palin). 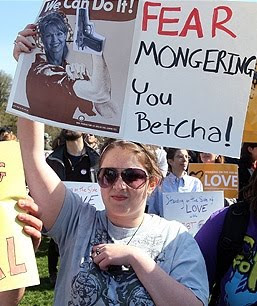 tweety made a good point yesterday. he said that he finds it remarkable how, in speeches, princess goes on and on about foreign policy in detail. however, when she's speaking off the cuff (or off the palm), she knows absolutely nothing about any of the countries she talks about, and nobody is allowed to ask her questions about any of them.

Yep~ in her upcoming visit- the media is not allowed in the room. They can watch from a TV in another room- only.
Did she think we would not catch on that she's not up to answering questions?

In other funny news, I got a pre recorded poll call, saying Since Health care reform passed, who would I be voting for president in 2012-- they listed Gingrich, Romney, Huckabee & a few more, but NOT Palin! Or would I vote for Obama.

Well hell-- we don't even know who is running in 2012 now do we? Obama may be ready to say take this job & shove it by then & not even run for reelection.

Yet Palin is here for a GOP fundraiser dinner.

Palin is a grifter.

It's been reported that since she abandoned her day job as Alaska governor, this street heffa has raked in a staggering $12 million.

Nice work if you can get it.

Now that she's a multi-millionaire, I think we can begin connecting the proverbial dots.

Palin doesn't care about fiscal responsibility or smaller Federal spending. What she's worried about is her tax liability. Will she and Todd pay 35% or 31%?

This woman is a fraud. A menace and a moron.

You know what puzzles me? It's obvious to most thinking people that Palin and her bunch of tea partyers are weird and way off center, but there are those, like the seemingly regular and normal woman in the photo holding the fear mongering sign, that actually like her crap and believe in it. I don't think they're in a majority, and can't ever see them getting there, but they are accumulating a lot of money and that just fuels their fires. What a waste of good hard American cash. Must be the people who have mo ey because they're not paying health care bills.
In the meantime, don't forget about Michelle Bachman, now there's a piece of work.

What Christopher said, to the letter.

Christopher~ The closing line in your post covers it completely.

Spado~ The Fear Mongering signholder lady was there as an antagonist- she & the photo above were there in opposition to Palin.

But you are right- there is a whole lot of $$$ flowing in the GOP coffers & clearly they are trying to use Health care reform as the reason they should be back in power.

I think not. 60%+ support health care reform.
So once again, they are out of touch.
The only good that might come out of this is if the GOP does in fact reject Palin, and she decides to run as an independent, then she can be the spoiler that helped bring down the GOP & they both come out as losers.

Hey Lulu~ Good to hear from you.

If these TP idiots had just stuck to the we-don't-want-to-pay-no-stinkin-taxes basis, they'd have attracted a lot more legitimate followers, mostly Libertarians.

Once they expanded into the gun-nut, anti-communist/socialist-nut, we-are-the-true-american-nut, no-bama-nut, glenn-beck-is-my-chalkboard-hero-nut territory, they really provided a place for alllll the disgruntled nuts around america to congregate.

I say, good, they are now much easier to spot! Used to be you had to dig a little to find out who the nuts were. Now just look for the I-want-my-freedoms-back bumper stickers. Where were those bumper stickers when GWB was illegally wire-tapping, using known false info to throw us into war, removing habeus corpus, torturing for lies, etc/etc?

There's a reason Palin starts all of her hate rallies with, "Who loves their freedoms", to thunderous response from the herd of tax-hating, war-loving, psycho-gun-nut audience.

FEAR FEAR FEAR .. worked for Bush/Cheney ... will work again unless rational people speak up and vote-vote-vote!

ps, the woman in the last pic looks just like one of my sisters! I had to look twice to make sure. Course she would never hold that sign, but the resemblance is striking. Just goes to show ya (like Spado said), they can look so normal. Wonder what her car's bumper sticker says?

Your Sister looks like the anti Palin snark girl? It took some guts to go to a tea party rally with those signs. I mean they already are an angry mob.
Yes they have gleaned from the extreme nut sector.

Oy! Palin has something brewing w the GOP, even though it is looking like she is not on the roster for presidential losers, I mean hopefuls.
Would they be stupid enough to run her again as VP???