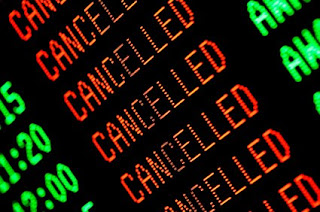 Eyjafjallajökull is the name of that pesky Volcano that is mucking up the airspace in much of Europe. Jimmy Fallon joked that the name looks like something his cat would have typed as it walked across his keyboard!


I work in the travel industry, so I have some up front encounters of travelers stuck, stranded, or just can't get a flight from the U.S. to Europe or vise versa.  The hope was that things would settle down & the air would clear, for normal air travel to resume, but instead, the Volcanic eruption seems to be getting stronger.
Eyjafjallajökull was now releasing ash in "pulses" and periods of steady plumes, but scientists say it is too early to predict how long the eruption will last. The volcano's last major eruption in 1821 lasted for two years. 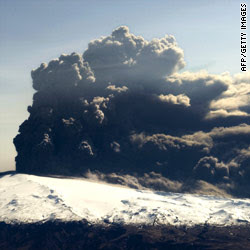 18,000 flights per day were canceled each of the last few days.

Eyjafjallajokull's eruption had a major impact on the world, as its 7-mile-high plume of volcanic gases and silicate ash has spread across much of Europe, bringing air travel across the continent to a near standstill. Britain's airspace is still closed, and authorities don't expect to loosen restrictions until sometime Monday at the earliest. On Friday, two-thirds of European flights were canceled, as were 180 transatlantic flights. Delays and cancellations hit airports from Toronto to Tokyo, and the problems have cost the global air-travel industry an estimated $200 million a day. ~ Time reports 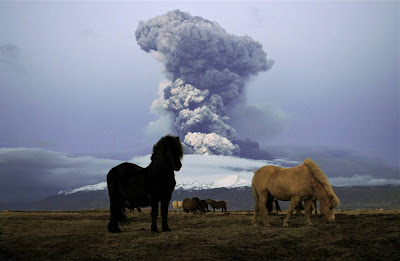 Winds have changed shift, and now some residents & their animals are having to evacuate.
Apparently they have done some test flights, and think it is safe to resume some flights. I have enough angst about flying, I'd have a hard time being one of the first up in the skies to see if Volcanic ash will effect the planes engines. Then again people stranded in airports for many days are probably willing to give it a go. It was interesting how different airports handled the issue.

some shut down entirely-

Others brought out the cots 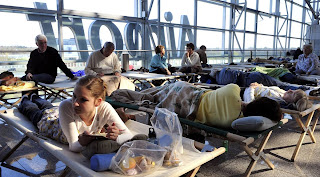 while others let the chaos flow 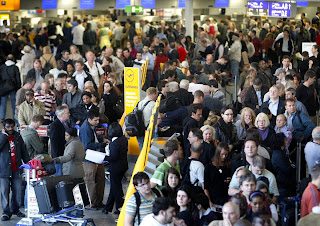 Meanwhile, Scientists get as close as they can to the Volcano to get more info 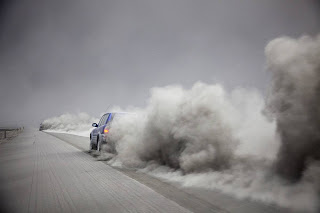 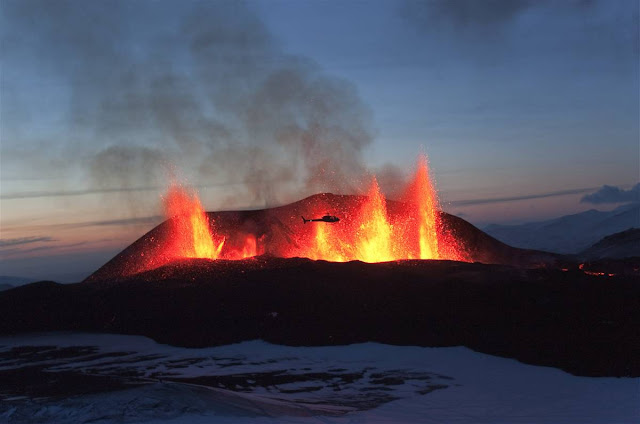 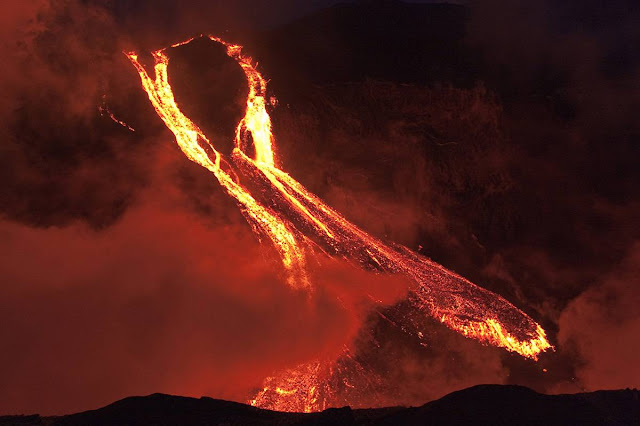 Katla is the sleeping sister to Eyjafjallajökull, and previous Eyjafjallajökull eruptions seem
to have triggered Katla to blow. Suggesting perhaps we ain't seen nothing yet!
Whoah!
Posted by Fran at 2:35 PM

I have friends stranded in London, but are right Mother Nature is in charge,good post

This could be a long-term disaster for air travel and tourism if this lasts 2 years as it did before. Plus all that ash in the atmosphere could cause a cold summer and affect harvests of many crops. Scary.

That said, if I were stranded in Europe I wouldn't be spending my time at the airport!

sometimes when plans go awry, you just have to make the best of it. i saw some londoners the other day saying that they fully understand having to close heathrow. can you imagine americans saying the same? they'd be bitching and moaning and threatening lawsuits. we are not a patient people.

Fran: what a fantastic photo of those brave scientists racing to get as close as possible to the eruption. (Or is that just a Toyota Rav4 they're in? )

Seriously though, since this eruption and its disruptive effects upon air travel, I have come across other such potential threats like Italy's Marsili undersea volcano 90 miles SW of Naples that could blow anytime, causing an enormous tsunami.

And what's this about a possible super volcano lurking beneath Mount St. Helens where "scientists now have special instruments that enable them to 'peek' beneath the seemingly dormant volcano, and they have seen a large amount of semi-molten rock, which could set off another eruption at any time?"

"A supervolcano is a major eruption that can send up enough ash into the atmosphere to block sunlight for years. ... Since these only occur about once every hundred thousand years, scientists tend to ignore this very real threat.

"If what scientists suspect is true, it would be one of the largest magma chambers ever discovered, like the one in Yellowstone National Park, which some experts think could erupt at any time, just like it did over 600,000 years ago."

Wow, imagine a world without air travel! Gee, might that lessen your workload some?

Dada what that toyota is driving through looks similar to what I drove through coming back to Spokane 2-days after Mt St Helens blew her top! Surreal ... a world turned grey-white! Our property values dropped 50% overnight ... without "benefit" of an economic recession or foreclosure crisis ... see mama nature really can do it all.