Palin does not add up- literally! 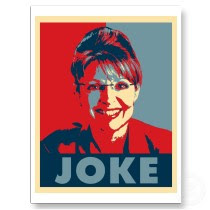 Sarah Palin's political action committee spent more money than it raised in the first three months of 2010, but the group is planning a "far more aggressive" fundraising effort as the midterm races ramp up.
SarahPAC collected $400,000 in the first quarter of the year, said the PAC's Treasurer Tim Crawford, but spent $409,000 in that same period.
Great! She wants to run the country, but can't keep her own political action committee's finances in the black.
The only question is why is she even a consideration for anything but Mayor of Wasilla?
Q: Should Palin have a major role in US Politics?
A: Hell No!
Posted by Fran at 12:01 AM

This dope has pulled in $12 million since leaving office.

Yet, the Zombies come out to see her and listen to her bray about topics she has no understanding of.

Just a little oversight. Pay no attention to the details!

yeah that $12mill ... wow ... PT Barnum was right about an american sucker being born every minute ... he was also right that people will pay to watch an elephant ride a bicycle ... and I think he also said sumpthin about there being no entertainment too low for the american mentality. (PT is one of my ancestors, in much the same way that Tom Paine is one of Glenn Beck's!)

i was listening to one of the news shows yesterday. the anchor was talking to one of the reporters about princess's planned speech at the college in california. the anchor asked if it's wise to spend $100K on a speaking fee when the state and the university system are so strapped for money that they're firing people like it's going out of style. the reporter said that $100K is not an unreasonable amount for a person of her stature. her stature? who the fuck is she? the mayor of a crappy little town and a quitter who couldn't even finish her term as governor. what knowledge does she have to impart to students? she won't even accept questions from the audience unless they're screened first. it appears that all you have to do is be famous in order to get a speaking gig at california universities. might as well get pamela anderson or paris hilton or carrot top. they'd be more entertaining.

DK~ How befitting you chose the circus analogy.
What is the appeal of this douchebag?

Nonnie~ Palin would think nothing of collectiong her huge speaking fee- to a college in financial ruins. I'm w you-- no stature there.
She should be giving a quitter discount. If I was a student there paying fees I'd be really pissed.
There should be protests on campus.

Palin should be paying THEM!

Still it's pretty funky to have a PAC that can't balance a budget.