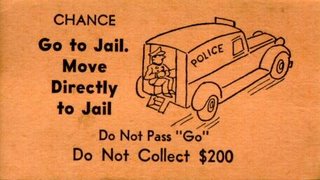 Supreme Court Justice Clarence Thomas failed over the course of at least 5 YEARS to report his wife's income from a conservative think tank, on his financial disclosures.
Between 2003 & 2007, Virginia Thomas was paid $686,589 by the Heritage Foundation, according to a Common Cause review of IRS records.
Clarence Thomas failed to note the income in his financial disclosure forms for those years, checking a box titled "none", where "spousal noninvenstment income" would normally be reported.
Federal judges are bound by law to disclose the source of spousal income.
"Without disclosure, the public & litigants appearing before teh court do not have adequate information to assess potential conflicts of interest, and disclosure is needed to promote the public's interest in open, honest & accountable government." (Register Guard Newspaper reports).

Clarence Thomas is a Supreme Court justice-- the highest court in the land.
To have this "oversight" happen 5 years in a row-- for a total value of more than half a million dollars, rings new meaning to the term "Blind Justice".

Will Thomas have some kind of legal consequence, or is a Supreme Court Justice above the law?
You know average citizens would be nailed to the maximum extent of the law.
Posted by Fran at 12:00 AM

Fran, And let's not forget what recently happened to Rep. Charlie Rangel,
the highly regarded long time Democrat who did not include rental income
on his tax forms. He was nearly removed from office.

will other people now be allowed to use that same excuse in court?

apparently he understood the law in the years before he stopped understanding it. he used to report her income before she starting earning so much from such obviously partisan activities. methinks judge thomas has selective legal misunderstandings.