Oh man! I live in a community obsessed with sports. The University of Oregon has gone over the top with sports mania. It began picking up speed when they did a $90 million dollar expansion of the stadium. Back then. one could watch the games on local TV.
Since then they signed a contract & got into franchising heavily, so ESPN has sole rights to broadcast.... I think one game of the season was broadcast on regular/free airwaves.
"Uncle" Phil Knight, the co-founder & chairman of Nike. Inc. - has a whole lot of coin & he is a U of O grad. He has endowed the University with some serious cash gifts-- including a new library, (named for his mother), a new law school (named for his father), and the most expensive basketball arena in the nation, (named for his deceased son).
Last year they built the Jacqua center, a fancy building that is an elite "Academic center for Student Athletes". The cost of this facility remained under a tight shroud.... because it was a gift, it did not have to be disclosed, initially.

The University released a set of requested documents to The Oregonian revealing that the new John E. Jaqua Academic Center cost approximately $41.7 million dollars to build.Funded by perennial University supporter Phil Knight, the 37,000 square foot structure cost about $1,100 per square foot to build in total, an amount well exceeding even some of the most expensive real estate in Oregon. Some call it the "jock box"."Forty million dollars buys a lot of new faculty, reduced class sizes, better facilities for the rest of campus," UO senate president Nathan Tublitz told The Oregonian. "It is a travesty to spend so much money for the benefit of such a small subset of students who already receive enormous perks." Although the state-of-the-art structure with its all-glass façade sits at the front entrance to campus, two of its three floors are only open to athletes competing for the University — roughly 500 students out of the University's 22,000 enrollees. "Its a really nice building," University sports marketing senior Taber Webb said, "but I don't understand why the best building on campus is reserved for less than one percent of the student population. My tuition is spiking every year because supposedly Oregon doesn't have enough money, but then you see things like Jaqua and its quartz stone fireplace on the first floor, and you begin to wonder what the deal is."University spokesperson Phil Weiler emphasized that the Jaqua Center was a gift from Knight and the University had no control over how the donated money was spent.


Furthermore there was a scandal w the outgoing football coach, who took a job w ESPN:
"The controversy over the $2.3 million buyout he negotiated with departing athletic director and former football coach Mike Bellotti. The Oregon Attorney General's Office and State Board of Higher Education are investigating the deal because Bellotti had no written contract. The buyout enraged some faculty members, who see themselves as underpaid and who go through rigorous reviews for their research contracts." 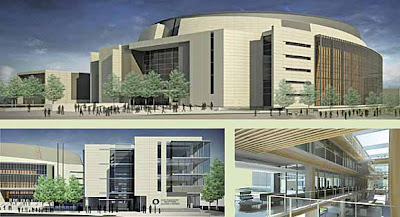 The new basketball arena, the most expensive on campus basketball arena in the United States , cost $227 million. Just opened Jan 11, 2011.
It has  a seating capacity of 12,541, and has an underground parking garage that holds 377 vehicles.


That factor alone is a good argument for a stronger focus on academics.  Whomever approved this monster structure, without requiring
adequate parking to match it, could have used better basic math skills.


How they ever got the city to approve that aspect, that leaves 12,164 people to go fish for parking, in the dense University & residential zones that are already plagued with parking problems is a mystery.


When they were building this vast sports emporium, it was in the midst of high unemployment & foreclosure rates. I wondered if their was going to be one of the nicest homeless shelters in the nation?


They must al be dazzled by the dangling Duck?


Now there are plans for yet more sports enhancements @ the U of O.


In June, the University went before the State Board of Higher Education to request a bypass of the public bid process to allow Knight to construct an 80,000 square foot addition to the Len Casanova Athletic Center for the football program. The project would include a UO Football Hall of Fame, covered parking and 20,000 square foot weightroom.


The new six-story, 100,000-square-foot building on the UO’s growing sports campus, but the gift won’t exactly be free to the university.
The new football operations building, a present from Nike chairman Phil Knight, will cost the UO athletic department roughly $1 million to $2 million, for rerouting underground utilities at the site near the Casanova Center west of Autzen Stadium. That work must be done at the department’s expense before construction can begin, under Knight’s agreement with the UO.
And it could cost the athletic department as much as $1 million a year to run the building when costs for new personnel, utilities and other expenses are figured in. However, department officials cautioned that that figure is just an estimate and that it will be some time before operation costs are known.
The gift comes with other strings. The building’s operation costs include five full-time positions, including a curator for a football hall of fame and museum that the athletic department is required to hire under the agreement with Knight.
And the project will result in the loss of more than 400 parking spaces next to the stadium. That’s because the existing soccer/lacrosse field west of the Moshofsky Center will have to be moved to the east side of the stadium to make room for three football practice fields that Knight will create as part of the deal. Knight is paying for the new soccer/lacrosse field.
Meanwhile tuition soared from $6,200 a year to $8190 & rising. That's tuition alone- it does not include books, living expenses, etc.
The stadium, the football building and the new $227 million Matthew Knight Arena, named for Phil and Penny Knight’s late son, the three most expensive buildings on campus.
And it would top the $65 million, 100,000-square-foot Lewis Integrative Science Building, now under construction and the most expensive academic building on campus, and the $75 million East Campus residence hall, also under construction and the most expensive student housing ever built on campus.
I have no problem with some sports on campus- but this Phil Knight big money sports obsession is out of control. Other campus buildings are very old & in need of replacing & updating, not to mention starving students struggling to pay tuition (my own kid one of them!).
But to endow the sports realms so extravagantly while leaving the academics as a lessor interest is out of control.

Not only does this new arena rely on having concerts & events other than games to make up $$$, that will take away from the City performing arts center, which is now dwarfed by the arena, with 2 theaters seating capacities of
2500 (Silva), 500 (Soreng). Well at least they built a parking facility next to this place. But a spokesperson for the Hult Center said they can not compete. The first concert @ the arena will be Elton John. The 2500 seating capacity @ the Hult is too small a venue for him & other big name performers. Suddenly, the 2,500 theatre will seem like a small intimate setting compared to the arena.
I don't mind a little college athletic activity, but all the big money & focus is going on the sports. One college Prof wrote an editorial saying he wished sports were not allowed at all at Higher Education institutions at all. They should just open special schools that only focus on sports & leave academia alone.
You can see the Harlem Globetrotter for $108 a seat, courtside, or the cheap seats (obstructed view) $20.
The mens BB game tickets run for $37 to $14 bucks, Women's BB game tickets run from $13 to $6 bucks.
Meanwhile, the Oregon unemployment rate is at 10.6.
Here is the icing on the cake:
The Ducks football team went to
the BCS championships. If the athletic dept. wanted to have a post season celebration, why not throw a party at Autzen stadium, or the new Matt Court, the brand new $227 million dollar, most expensive basketball arena in the country -- at their own expense?
The Ducks had an all win season this year, but lost the championship game. Still, they would have a parade, regardless of the championship game results.
$26,000 to have a parade is nuts. The city paid for half of this parade.  The irony of the timing- the Eugene School district is poised to shut down 4 schools & possibly a 5th one in 2012, and seriously considering imposing a new tax to help fund elementary education. The very same week the Ducks had their parade, a count of the homeless was done in our area.
Think the City of Eugene taxpayer money would have been better spent funding education or helping those in need?
I guess $26,000 is just pocket change for Uncle Phil, except he did not pay for this parade.
All this after they LOST the championship game!
We never get this kind of crowd for rallies to end the wars.
Posted by Fran at 12:10 PM

and we wonder why education sucks in this country. it's pretty clear where the priorities are.

Is this situation over the top & out of control???
You should see some of the old buildings on the academic side. Funky old furnaces, belching & burping along & old classrooms w funky seating. They have some newer lecture halls & such but so much of the academic side has suffered.