Stumbling in the darkness 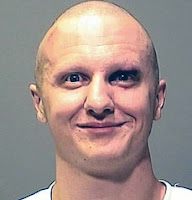 Just some thoughts about mental health care in the U.S. Thinking about the life of the shooter in the Arizona killing spree, and how his mental health issues were neglected.
The media goes about the community asking people about their encounters with Jared Lee Loughner. People said he was scary in high school. The community college he attended, he had multiple encounters, that led to suspension with a requirement to have a mental health evaluation in order to be able to return to school. Instead, he dropped out, bought a gun, killed 5 people, and injured 19 total.

Let's just entertain the idea-- what if when multiple red flags for mental health issues surfaced, hewan not just "thrown out" of school, but sent for medical care. I don't know if Loughner has full blown paranoid schizophrenia, (some mental health pros checked out his you tube channel & came up w that diagnosis).
One neighbor said the first day he met his neighbor, he told his Mom, that guy will likely be a serial killer.
So how sad, that his mental health issues were not be addressed until he bottomed out, in a killing spree.
Now that the damage is done, he will have mental health evaluations, and get medical care.


The alleged shooter, Jared Lee Loughner, 22, briefly appeared in a Phoenix courtroom to formally hear the charges against him. If convicted, he could face the death penalty. A preliminary hearing was set for January 24.


I have a dear friend with an adult son who has severe multiple mental health issues. I have witnessed her struggle for years, with a medical community that is set up like a maze- letting the family stumble in the darkness, hitting walls with dead end, no results bureaucratic medical systems.  Our mental health "system" offering little to no support at all, until it is a crisis.


Jared Lee Loughner's life is over. He will either be diagnosed mentally incompetent, and institutionalized in a lockdown situation.  Spend the rest of his life in solitary confinement with no chance of parole, or he will get the death sentence. When you kill a Federal Judge, and shoot a Congressperson, and an innocent child, it is very likely Loughner will be the case that sends a message-- if anyone else thinks a shooting spree is a way to express dissent, then this case will demonstrate the severe consequences.

His victims:
Six people were killed, including U.S. District Judge John Roll and 9-year-old Christina Taylor Green. Giffords and 13 other people were wounded during the rampage.


Tragedy on top of tragedy.

a correction i wish i didn't have to make, but there were actually 6 people killed.

mental health care in this country is so inadequate, especially for those who are very ill. the bad news is that, with budget cuts, it will probably get a lot worse. this country seems to be happier investing in prisons than they do in preventing crime.

Sadly, I made the correction, Nonnie, to 6 deaths.

True - when the budget axes fall, making cuts to mental health care is an easy cut for politicians.
Those families immersed in caring for someone with mental illness are strapped, usually on all fronts- financially, emotionally, struggling to just keep afloat...
They don't have powerful lobby groups w big money to push for their cause.

Besides all of the above, just read this:

Outside Sportsman's Warehouse, the cavernous store where Loughner purchased his Glock, gun owner Jason Moats said that "the bad guys can get the guns either way." He suggested that the shootings could have been less tragic had there been one more weapon out there, rather than one less.

And Bloomberg News reported that pistol sales soared in Arizona on Monday. Citing FBI data, Bloomberg said one-day sales of handguns in Arizona for Jan. 10 were 263 — 60 percent higher than on the corresponding Monday a year ago.

Harry Shearer pointed out that in the 1980's Reagan decided to empty the mental institutions. It was part of his effort to reduce wasteful guvmint spending. The goal was to have states provide local funding for community mental health services. Well, just like most trickle-down voo-doo, that never happened. Since then, we've been stuck with an ever increasing population in need of mental health care that literally have no place to go.

Still, people who knew the Loughner kid knew something was wrong. But until he made his move (with a gun), no agency did anything because he commited no crime. His background gun check revealed nothing because there was nothing (yet) to reveal.

His parents either did not take the community college's recommendation seriously or perhaps they were in denial or in fear themselves. Sorry, but I do place some blame on the parents (because he was still living at home where they would've seen/interacted with him daily).

I really have no idea if any kind of mental healthcare would've helped this Loughner kid. If he'd been required to spend any time under psychiatric care, the flashing red alarm bells might've sounded loud enough to get him some serious mental healthcare. But even then, it might not have stopped him from eventually killing.

To me, the key is gun access. Take that away and the mental intent to kill becomes much harder to easily enact. Someday, maybe U.S. voters will realize the reason our violent crime rate is so many orders of magnitude greater than countries with strict gun control is within our power to change.

Until then, one of our UT rep's (Chaffetz) says he will now be carrying his own gun when he meets the public (not a big change for him since he was already doing that here in UT, just not in DC). Rep King (R-NY) wants to make it illegal to carry a firearm within 1,000-ft of any elected official. I am totally offended by that. Is his right to live without being gunshot greater than mine or anyone else's? Why does he rate the 1,000-ft safety zone and not every citizen?

BTW, I can hardly look at that mugshot photo. Anderson Cooper called it ghoulish. Chris Matthews said it might keep people up at night. I keep thinking, Uncle Fester (Addams). Creeeepy!

First, this should, once and for freaking ALL, give lie to the idea that if everybody went around "packin'" public tragedies like this could be averted. I'm sure more than one person in that crowd (other than Loughner) had a gun. Statistically, it seems like a certainty. But nobody drew one. Loughner was brought down by simple physical force. More crimes are solved and averted by such things as anonymous phone calls and random chance than mythical John Wayne heroics. If Limbaugh or Beck had been in that crowd, their next stop, if not the hospital, would have had to be at home, for a change of underwear.

Second, the mental-health dilemma is so politicized, I despair at our ever arriving at a consensus that saves lives. Throughout the 1970s and beyond, the notion that anyone could be detained because of their mental status became a trope of horror ("Snake Pit," "Cuckoo's Nest," etc.). While emptying the large hospitals was a sound idea in terms of both the human and fiscal consequences, somebody (everybody) dropped the ball when it came to figuring out an alternative. Mental illness still carries such a stigma that no one wants to touch it. If there had been stronger mechanisms in place for reporting someone like Loughner and getting him "taken out of circulation," people would still have hesitated because the vast majority of us don't want to be "that person" who deprived someone else of their liberty. It's one thing to see someone tried and convicted for the objective reality of having committed a crime (which is why it's almost a relief for some who knew Loughner that he did something he CAN be "put away" for), but quite another to point a finger and say "This person is 'crazy' and unfit to be in society." It's too easy to look into a mirror and say "Aren't we all a little 'crazy,' when you think about it? Who are we to judge?" Mental health is still too inexact a science.

DK ~ 20/20 hindsight is a great thing... but I know as a parent, if my adult child was suspended from College & the college requires a mental eval to return.... that would have been a red flag.
It would have caused me to take action.

It's true Reagan heartlessly threw those needing mental health care assistance under the bus in a cost cutting measure...(oops! instead he increased the debt by $1.9 trillion!)

Clearly the easy access to guns + instability + fanning of flames by Palin & the rabid right, resulted in this mass murder.

As for Congress members packing guns... turns out DeFazio has a concealed permit as well.

Great! Who the hell wants to go to a freaking town hall meeting that will be a shootout?
Besides I found DeFazio's town hall meeting are him yammering on & on & not giving We the People time to ask him questions.

I agree w your perspective.... the politicians will live in a protected bubble??
the rest of us schmucks need to fend for ourselves.


VolE- Thanks for making me laugh w your underwear reference! LOL!
You are right- regular people did things like knock the shooter down with a folding chair & physically jump on top of him & hold him down. Another kicked the gun away, another grabbed the magazine of bullets he was going to reload with.

It is a fine line in knowing if someone is just different & harmless & a powderkeg about to blow. If there is no safety net or process set up to screen & help-- then the help comes AFTER
the disaster.

You start to see a pattern of people who were troubled- there were red flags along the way, then they snap.

How do we break this cycle?

I have nothing to add....you and dk pretty much said all that was on mind...thank you...