The $hit has hit the fan or "Bye Bye Billions" 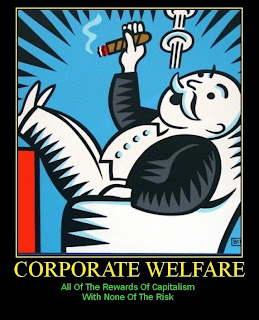 Wow! What was I thinking, taking a glimpse of the news headlines today? 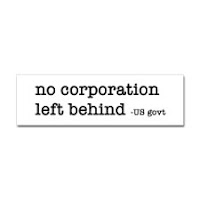 10 companies with the most untaxed foreign income

This additional news piece is obviously related-- the flip side:

Poorest of the poor:

"About 20.5 million Americans, or 6.7 percent of the U.S. population, make up the poorest poor, defined as those at 50 percent or less of the official poverty level. Those living in deep poverty represent nearly half of the 46.2 million people scraping by below the poverty line. In 2010, the poorest poor meant an income of $5,570 or less for an individual and $11,157 for a family of four."
Click here for full story
A friend had just e mailed me about how a necessary medical procedure will put her into bankruptcy- even with health insurance coverage.
She wrote:

Thanks for updating us on some of this quarter's profiteers and losers. Ah, "CRAPITALISM, it's a beautiful thing!"

And sorry of your friend's looming bankruptcy. I think of most of us are in the same boat with anyone of us at any unsuspecting moment can be blindsided by circumstances that can be life altering beyond our formerly "American" (wildest) "Dreams." Good luck to her and her family.

Jon Corzine abruptly resigned from M F Global as $633 million went missing (awwww no golden parachute for him)....
but hey his bank buddies are doing their damndest to make his disappearing of $633 million look good.
AIG & Freddy Mac lost BILLIONS.

" it's just a corrupt crumbling cesspool run by fascist pigs. "

How do professional $ managers get in the hole by billions?
We don't need no stinking regulations, just screw up, then hit up the Federal treasury & make sure you get your annual big bonus.

What a grand system we have.

wall street whores still blame the economic crash on too many "unqualified" (i.e., low income) homebuyers defaulting on their highly inflated home mortgages. Since when did poor people have the power to bring the world economy to its knees? And if they did, who gave it to them? Who encouraged Liar Loans and then packaged and sold those loans like a commodity backed by meaningless AAA security insurance ratings?

Did poor people invent all that adjustable mortgage voodoo so they could spend a year or so in nice homes before the global house of cards crashed and took our jobs down with it?

Wow, who knew poor people ever had so much power!

I look around and see foreclosed homes everywhere, a developing class of permanently unemployed, families living so near the edge that just one more unexpected expense will put them out on the streets ... then I look in the other direction and see huge salaries and bonuses being paid to the very group of wall street whores whose job performances would be more aptly rewarded with prison time ... bizarro world!

DK ~ You are right- the predatory lenders pounced on telling people they can pay less per month right now (either buying balloon mortgages for a new purchase, or refi existing loans-- never disclosing that balloon payment just a few years down the road that will make them homeless.

Even B of A rescinding their lousy $5 a month debit card fee does not absolve them from the criminal foreclosure activity-- choosing to make homeless via foreclosure, rather than rewrite mortgage loan for lessor profits, or maybe even more profit over a longer period of time.

When we bought our home, they used strict guidelines- your mortgage & tax pmt could not exceed X amt of your total income.
They knew you needed to eat & pay utilities & had to calculate a real assessment of what you could actually pay in a home loan.
NOT what you might afford to pay, IF you win the lottery in 5 years.

So yes, lenders giving likely to fail loans w balloon payments not far down the road was their own recipe for disaster. The poor folks who were tricked into the lure of "low payments right now" were duped.

Unfortunate they did not understand the contracts they signed, but criminal that lenders who did know, took advantage & set them up for the fall.

Guys like Corzine who bring a $ mgmnt company into bankruptcy & lose $633 million committed crimes. It should not just be an option to decline the golden parachute retirement package & walk away-- he should be in jail.

21st Century bank robbery/hoists don't use the gun & bandana face cover, they wear fine suits & have all access codes & employee badges.
They sit in corner offices & boardrooms.
No need for petty acts of robbery, when larger thefts can be made from the inside.

The fact this keeps happening, screams for the need to regulate. They need watchdogs with teeth to oversee the banksters.

Otherwise we will simply yawn when we see headlines showing major lenders $10 billion in the hole on any given day & fully expecting the Federal Treasury to hand over another bailout.

The majority of Americans are not losing sleep at night hoping the banksters get their full bonuses & are able to keep their summer homes in the Hamptons.

Heads should be rolling. Any management team
capable of mismanaging to the point that losses are in the billions belong in jail or the unemployment line.

Big diff between oversight & overlook.
This "system" is as broken as it can be.