I can't join the "Occupy" movement's day of action/march today, but in solidarity, here are some of the issues they have posted re various banks strongholds & unfair/predatory practices. 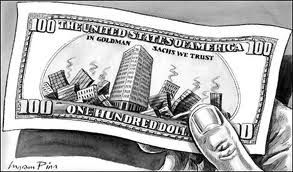 Boycott
Umpqua Bank
1.  Umpqua Bank accepted a $214-milllion-dollar
bailout they admitted they didn't need, but they did not
pay back.
2.  Chairman Allyn Ford is the owner of Roseburg Forest
Products a company that clearcuts old-growth forests.
3.  Chairman Ford is responsible for massive pesticide
spraying in Oregon.
4.  Peggy Fowler, the Director of Umpqua Holdings Corp.
(owner of Umpqua Bank),  is on the board of the Federal
Reserve.
5.  Despite the recession, Umpqua Bank is making
record profits this year.
http://www.forestdefensenow.com/
http://occupyeugenemedia.org/
Click here to see the revised logo/name of
"Stumpqua Bank"
U.S. BANK ~ 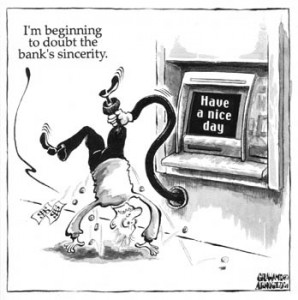 KICKING PEOPLE WHEN THEY ARE DOWN
The National Consumer Law Center recently released a report on unemployment benefit cards, in which Oregon received a “thumbs down” ranking for the overdraft fees associated with the U.S. Bank-issued ReliaCard.
According to FairEconomyOregon.org, Richard Davis, head of U.S. Bank, says the company expects to recoup about half of potential lost profits from swipe fee reform by nickel and diming the unemployed through prepaid cards and related products. 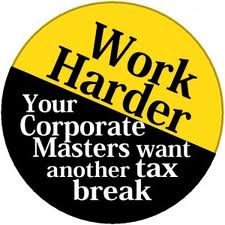 On the Boycott Umpqua Bank post. PLEASE CHECK YOUR FACTS!! or is this what passes for the truth these days. ON ITEM 1. UMPQUA BANK REPAID 100% IT'S TARP LOAN LAST YEAR WITH INTEREST. a simple fact check will validate this. on item 4 Peggy Fowler was appointed to the board of the PORTLAND BRANCH of the federal reserve in 2007. a largely cerimonial roll.
on item 5. this is simply not true. It's true that Umpqua bank is profitable but not even close to historical levels. Check your facts....read a book....stop manipulating the truth to meet your agenda.

Anon: I gleaned the info from the Occupy Eugene site. I could not verify the Umpqua TARP loan was paid on Snopes, but Googling Umpqua bank yielded this info:

As reported by Oregon live:(4/2010)
Umpqua's parent company on Thursday reported net earnings of $9.7 million. But after paying preferred stock dividends of $12.2 million, the net loss attributable to common shareholders in the period was $2.5 million, or 3 cents a share.

About $10 million of that $12.2 million preferred stock payout was to the U.S. Treasury, interest on the $214 million it had borrowed from the government as part of the TARP program, said Ron Farnsworth, Umpqua's chief financial officer.

Umpqua bought the remains of two failed Washington banks during the quarter, giving it a significantly larger presence in the Puget Sound area. It bought certain assets from EvergreenBank of Seattle in January and Rainier Pacific Bank of Tacoma in February.

The deals gave Umpqua more than $1 billion in new assets.


web link:
http://www.oregonlive.com/business/index.ssf/2010/04/umpqua_bank_pays_off_tarp_impr.html
Portland Independent Media:
A banner drop was made today opposite the Umpqua bank on 18th and Alberta street in Portland to raise awareness of the fact that the Chairman of the Board, Allyn Ford, is a timber baron of the Pacific Northwest. Portland, Oregon, USA. 27/07/2010.

Not only is Mr. Allyn C. Ford Chairman of the Board of Directors for Umpqua Bank, but he is also President of Roseburg Forest Products. According to their company history, "The company owns some 800,000 acres of timberland as well as processing plants in and around Roseburg, Dillard, and Riddle, Oregon, and in northern California."

People would like to see a boycott imposed on the bank for a number for reasons stemming from Mr. Ford's forestry company which has used methods such as clearcutting the forest combined with the use of toxic pesticides. Clearcutting or clearfelling is when all of the trees in a harvest area are cut down.

I have no problem posting a correction if misinformation was posted.

However buying up other banks & having a billion in new assets may not be an historic level, but if in part is built on wreckless exploitation of public lands sold to corporations for profit, then it is the bank that is OK with taking money from the Federal reserve to be bailed out & selling out for timber profits & putting said profiteers in Chairman of the board positions is more of the same.
Just because Umpqua bank declares they are hip & progressive does not make it so.
Classic to use a tree logo, but be in bed w the timber industry.
If the clearcut & toxic herbicide spray facts fit, then take your own advice:
Check your facts....read a book....stop manipulating the truth to meet YOUR agenda.

Local credit unions have no service charge & a $10 opening deposit.

If you don't know the difference between PROFIT and ASSET I am wasting my time trying to enlighten your myopic view of the world.