An open letter to Sherri Neet

The headline story in today's local Register Guard newspaper is the local #Occupy protests at multiple banks, they quoted this comment:
"Sherry Neet, who watched outside Chase Bank, said the movement had attracted too many people who were looking for a free meal and place to sleep rather than actual working people trying to effect change."
"It's the bums and the drug addicts that are running with them," Neet said when asked why she didn't agree with the protest. "It's not the working man that's standing up for any of this."
An open letter to Sherri Neet:
Dear Ms. Neet: Lucky for you your life is so neat that you have not experienced the hardship of job loss or being unemployed.  My "working man" husband who has raised two children and provided for all their needs in the decades of their lives will soon, according to you, be in the "bum" category.
You see, the company he worked for for the last 13 years went belly up in bankruptcy and a few thousand workers lost their family wage jobs & health insurance.
But the company was bought & sold & reopened. He was able to get rehired, and according to your perspective, will no longer be a bum.
But due to bad economic times, the company is restructuring, and once again closing the factory, in order to take advantage of another States corporate welfare tax incentives.
So once again, he will be in the "bum" category.
What you fail to recognize, Ms. Neet is a reality check:
"The number of long-term unemployed nationwide, defined as those jobless for 27 weeks or more, has been unprecedented in this recession, economists say. In February, 6 million unemployed workers were in this category, accounting for nearly 44 percent of the unemployed. That figure remains near the high of 45.6 percent last May. That share of the long-term unemployed is one of the highest on record, the bureau reported."Read more: http://www.sanluisobispo.com/2011/03/19/1528781/slo-county-unemployment.html#ixzz1e4aHcACE
Statewide Oregon's unemployment rate is 9.6%.
Right here in Lane County, unemployment stats look like this: 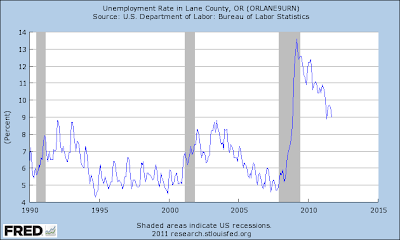 Nationwide unemployment rates, not looking so good either:
Also note a "job" is not an apples for apples comparison. A family wage job with affordable health care for all family members is not the same as a minimum wage job w no benefits, or pays so low as to not be able to afford the health care insurance. To have a job and live at or near poverty level is not the same as a Wall Street Banker who gets a $700,000 annual bonus.
It is widely recognized that the numbers do not reflect the true # of unemployed, because those who fall off the official ranks are no longer counted.
I just want to be clear that unemployed bums may not have a choice to be employed.
They certainly don't stay awake at night worrying about how they will invest or spend
hundreds of thousands in bonus money. Although they do need to keep a close watch on the bank that the State contracted to distribute Unemployment funds on a Visa debit card- the fees and fines they can assess those struggling through unemployment. 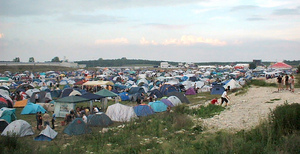 So Ms. Neet, before the Occupy movement began, we had Tent cities right here in the USA. Not a fun camping jamboree, but destitute people who had no other housing options. In fact about 1.5 million people are homeless in America.
The fact that the Occupy movement recognizes and is inclusive of all- those who are employed, working poor, unemployed, homeless, students facing underemployment and huge college debt, or perhaps facing foreclosure, or medical debt bankruptcy. Those "bums" include Veterans, the elderly, disabled people, and minor children. The "bum" label & stereotyping you wield is disrespectful, assumptive & degrading all at once. 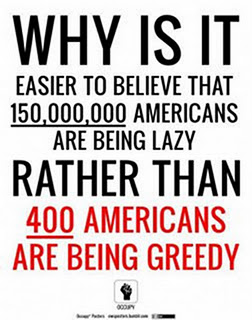 The fact that this government spends in excess of 60% of the entire national budget on military and wars means we don't fund health care, housing,  & education.
The media may tell you we are in a recession, but take a look around, it's looking more like a depression. If you should happen to join the ranks of the unemployed, you could become a bum in the blink of an eye.


So to all you Sherri Neets in the world- wake up. When employable people with college degrees apply for hundreds of jobs over the course of 2 or more years and can not get work, it is not because they lack motivation, so park your judgement & consider being part of the solution. Name calling & passing judgement makes you a part of the problem. You may be one pink slip, or medical bankruptcy away from joining the ranks of the occupy movement.
Posted by Fran at 10:03 AM