By Nicholas Caleb of Portland, Oregon.Nick is a local attorney, college professor, and most recently, an Occupy protestor. Read the entire article at Blue Oregon.


Failing to use violence on peaceable assemblies should not be lauded as respectable restraint. Instead, we should be outraged that it is ever even a consideration in the first place!


"I am very, very troubled about a narrative floating around in local political discourse: that Occupy protestors are solely responsible for increased police spending and must cease their activities because they are causing the absurdly large police presence which materializes in order to monitor each protest.
This narrative implicitly assumes that police have no option but to flood the streets with officers when any large group of people gathers together. And apparently, some of the police must be dressed in full riot gear (and visible to everyone) even when there is no indication that violence will occur. The absurdity of this tactic was immediately apparent to anyone who participated in yesterday's protests, filled with citizens young and old -- college students, retirees, established labor officials, war veterans, and other concerned citizens -- marching (while happily dancing to funk music, a sign of violence if I've ever seen one) with the intent of highlighting the failures of a broken system. From the response of the police, you'd have thought that Occupy organizers had proposed a violent overthrow of the local government! Instead, police knew very well from discussions with the organizers and their own secret infiltrations of public meetings (really, what is the point?) exactly which protestors planned to enter banks and be arrested for non-violent disobedience -- sitting in the banks and thereby disrupting business.
Let me propose a different narrative: the police are implementing specific policy choices when they decide to pay their officers overtime and recruit extra officers from departments around the area. They are not forced to do so. In fact, in light of the repeated and consisted peacefulness and non-violence of Occupy protests up to this point, the police go far beyond reasonable bounds when they arrange intimidating displays on the streets. And when individual police officers (names withheld, but I'll be submitting complaints to the city) are visibly itching for a violent confrontation, pushing people around with horses and hitting women with batons, the police are the instigators of violence and not the protectors of citizens. 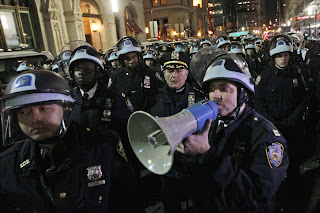 The first irony of the situation is that we have a Constitution granting, as its chief civil liberty, the right of citizens to peaceably assemble. Presumably, this right extends to the ability to express displeasure at the dominant ideologies of the day without having to submit to intimidation and implicit threat of violence that accompanies the presence of riot police. Scaring people during an assembly, though not as serious as actually beating them, is a form of prior restraint, of telling you that the State doesn't authorize your message.
The second great irony of this situation is that the Portland Police are going to bankrupt themselves with their adopted strategy if Occupy protests continue.Like a boxer who has just seen a cut open up over his opponent's eye, any Occupy organizer worth his salt is going to notice the vulnerability of the police to this brute economic fact and immediately organize more protests. 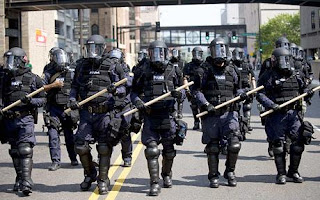 In fact, the next protest should be aimed directly at the overuse of police force. Imagine the irony of the police coming out dressed like storm troopers to intimidate protestors who are trying to highlight the excessive uses of police force and intimidation. We might be treated to such a show very soon, as leaders of the police apparently cannot tame their authoritarian instincts even when self-preservation and legitimacy are on the line."
I've seen & heard lots of news coverage stating the cost of having enhanced police presence. I love the idea of protesting the police overreaction & the ironic, or would that be oxymoronic response that would create! The Occupy movements have been largely & purposefully peaceful. In fact when the Portland Oregon eviction came down, the Occupy crowds were often chanting, to the riot gear clad police, "We are peaceful people".


Wow! That was powerful stuff facing down baton wielding, in your face, throngs of riot police. Such a Gandhi moment.
The sad commentary is the masses have been so quiet & complacent, law enforcement & municipal authority figures are startled to suddenly hear the roar of the discontent & realize there are so many.
Imagine if the Occupy movement grows to a point where they realize there is no way they can send floods of police to try to have an intimidating presence at every event peaceful citizens opt to exercise their Constitutional right to assemble freely.
I'm loving the peaceful revolution & hope the police calm down & learn this is  the new normal, and understand it is a constitutional, legal right to freely assemble.
Granted the free speech is at a roar, but it is long overdue.
Posted by Fran at 8:39 AM