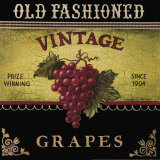 I'll start with a warning that there will be some whining & ranting ahead. I'll try to inject some humor to make it palatable.  Life is like that sometimes, and releasing my angst via blogging is cheaper than actual therapy- so here goes...
I tell the story in reverse. 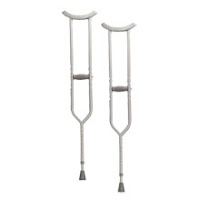 Today was the first day I experimented with taking a cab to a physical therapy appointment. The cab was filthy with old ratty gold microfiber fabric that looked like it had not seen a vacuum for quite some time. The cab company said I should not call to make pick up arrangements in advance because it will likely "get lost". That should have been the red flag-- but who knows what possessed me to continue to check them out. The pick up driver was the classic.
"That must be really rough" he commented, while he sat on his ample derriere, in the driver's seat watching me struggle while I moved a large shoulder bag & juggled around w crutches, trying to get into the back seat of the cab, with one knee that partially bends. 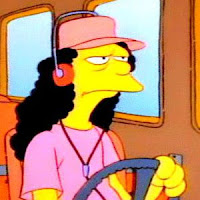 As I hoisted the crutches into the cab, I could not believe this dude. He reminded me of a heavyset version of Otto the schoolbus driver on the Simpson's cartoon. "It was less rough with the last cab driver who helped me get into the cab", I replied. Hey, the guy needed a clue, right?
Anyway I was floored & decided to call a different company for the next therapy appointment.
They appreciate people calling in advance & do lots of medical appointments.
So it's been a rash of events (bad word choice, you shall see.)
My Mom passed away.
Could not attend her funeral, medically grounded post op.
Developed carpal tunnel-- in both wrists.
Given splints to wear on both hands.
Developed flaming burning itching contact dermatitis rash on both wrists.
Alternating with using a walker to try to ease up on the wrists (thank you Goodwill for the $10 special)
Wore a neoprene brace to go for a walk, per therapists OK-- 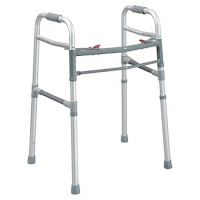 Developed flaming burning, itching rash on the surgical knee.
One month w no driving down, one to go.
This is a long post op recovery, but all these extras are making it incredibly more painful and frustrating.
I'm struggling to be positive.
Waiting to know if I need wrist surgery, no- make that two wrist surgeries.
Although I have seen 2 doctors about the wrists, a general practitioner, and and Ortho wrist specialist, I am told I must be tested by a Neurologist. Since I am not able to drive making three trips for one diagnosis, just a real fun time.
There is some good news to be told--
I've dropped 14 pounds since this all started.
I have a small floor bike pedal gizmo & not only can I do the full rotation, but doing 100 +, rotations & building up to more.
I am beginning to transition to using a cane for walking-- but not ready for stairs w a cane just yet.
Kind of like in the Velveteen Rabbit story, the recovery happens bit by bit, and I am working my way towards full recovery.  What a long strange trip it's been!
I know Greece is turning the worldwide economic scene upside down & Rick Perry gave some drunken speech. His handlers said he was just being passionate. Correct me if I'm wrong, but I think passion does not usually show up on drug tests!
Here's the condensed link: click here. 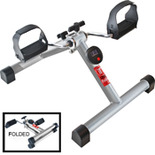 You dropped 14lbs. since it all began?

Sorry, just a stab at humor.

Thanks for the much needed laugh Christopher.
Weight Watchers would have been easier, for sure.

Here's another laugh-- my Doc rx'd a course of steroids to tone down the widespread rash situation.
He tells me the pharmacist advised they must be taken with food, and they may cause moodiness & agitation, hands me the meds, then promptly left the room.

I'm sure he's thinking just what he needs is (more) moodiness & agitation from me!

Hang in there. You will get better.

If in the unlikely case you don't, switch doctors. But it sounds like your doc is really involved with your care.

Wow, you have been wrung through the wringer! I do think blogging and letting it all hang out is cheaper than a therapist so go for it.

I hope you get to feeling better soon! :)

so sorry it's taking so long for your knees to heal. my knees keep getting progressively worse, but i'm afraid to go to the doctor, because i've read of your ordeal, and i'm afraid he'll say i need knee replacement. on the other hand, i'd love to lose 14 pounds!

do you think maybe one of those canes with feet might be better for you? not real feet (if only!) ... they look like a three-pronged claw on the bottom vs a single tip regular cane. might help you to feel more stable at first.

I can see where between pain meds, PT rehab exercises, unhelpful cabbies, painful wrists & rashes, you have no time to eat ... ergo losing 14-lbs the hard way!