a hatred of women

Greek misogynia, from misein to hate + gynē woman —First Known Use: circa 1656 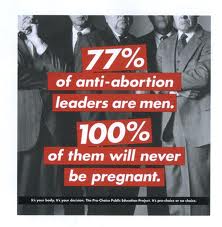 With a spate of new legislative proposals to literally govern what choices a woman can make, and how they can make them, one can't help but feel there is a real trend that essentially makes women some kind of governmental punching bag for reproductive choices.

Several states have adopted "fetus is a person laws", as well as mandatory ultrasound prior to abortion, some requiring the patient to view the ultrasound image, others take it further with mandatory viewing and lecture- as well as a 24 hour waiting period. 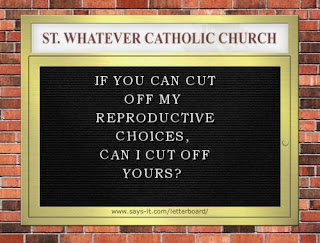 As the legislation gets more crazy, it has created "counter legislation" such as the following:

• State Senator Constance Johnson of Oklahoma City has served Oklahoma's 48th Senate District since 2005, but it was yesterday's introduction of Senate Bill 1433 that really pushed her over the edge. The bill sought to define human life as beginning at the moment of conception, before it's even implanted in the womb, and offers full legal protection to those tiny multicelled lumps. In the words of the bill, "the unborn child at every stage of development (has) all the rights, privileges, and immunities available to other persons, citizens, and residents of this state."


Johnson submitted an amendment of her own to the bill, which would have added the language,


However, any action in which a man ejaculates or otherwise deposits semen anywhere but in a woman's vagina shall be interpreted and construed as an action against an unborn child.

The State Senator later willingly withdrew the amendment, telling her colleagues that she had introduced it to highlight the ridiculous sexism inherent in a Personhood Law that would force women to be pregnant.
• Another pro-choice legislator, Democrat Jim Wilson, attempted to add an amendment to the bill that would require the father of the child to be financially responsible for the woman's health care, housing, transportation, and nourishment while she was pregnant. The amendment failed.

She drew headlines last month when, to counter the ultrasound legislation, she offered an amendment to require men to have a rectal exam and a stress test before being prescribed erectile dysfunction medication. 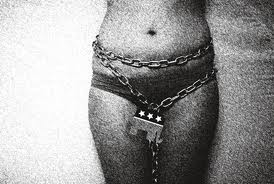 Of course Senate Republicans rejected these measures. Because these creative amendments shed light on two things:

1- How ridiculous legislating reproduction is.

2- How quickly amendments fail and are rejected when it addresses Men's role in reproduction.

See? They are OK w basically harassing the woman about her choice, but it's hands off for the men.
No mandatory lectures or probes about what their reproductive systems might do.....
because apparently, all the blame & lectures will fall on the individual who happens to have the childbearing components.

But no. All the rules and regs, add ons and take aways are geared towards women with their evil lady parts. They & they alone are the gender who carries the baby, the stigma, the guilt, and the responsibility, who have the nerve to think they should have the right to be able to make these decisions for their own lives.
Local Politicians can't even get it together to manage pot holes, do I really want to entrust them with my own personal  family planning decisions? 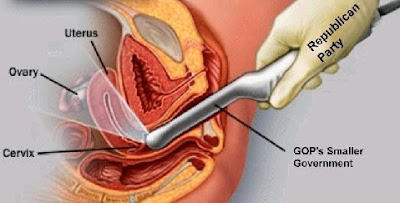 Just for a quick reality check:
A transvaginal ultrasound (the type needed in the first trimester of pregnancy)
Has a national average cost of $525.

Obstetric ultrasound pricing is higher, and this fee does not include the radiologist fee. If you were to pay out-of-pocket for a traditional ultrasound in a medical setting, expect it to cost $700 to $1,200 or more.

Since routine ultrasound is not considered medically necessary as a component of first-trimester abortion, the requirements appear to be a veiled attempt to personify the fetus and dissuade a woman from obtaining an abortion. Moreover, an ultrasound can add significantly to the cost of the procedure.

CLICK HERE TO SEE THE CURRENT CHART OF STATE MANDATED ULTRASOUND PRE ABORTION REQUIREMENTS  SCROLL DOWN TO PAGE 2 FOR THE CHART.

While the republicans are touting their "less Government" agenda- get a load of the breakdown of different state Ultrasound requirements:

• Information on accessing ultrasound services- some states require verbal, others written, and some both verbal and written.

• Required for each abortion: The Provider MUST display and describe the image

• Required for each abortion: The Provider MUST offer the woman the opportunity to view the image

Notice of all the various mandates for women, there is not one for men. Not one!
I hope the ACLU will step up when a woman with a $1000 utrasound bill decides the person or state that imposed the mandate, should in fact pay the bill. I'm talking to you Rick Perry (the pro life executioner of 234 people,  & all the Governors in the 7 states on this medically unnecessary & invasive bandwagon.


One hopeful glisten in breaking news: The Governor in Virginia (poised to impose the mandatory transvaginal ultrasound prior to abortion), had so much pressure, he required an amendment in the 11th hour:


"Mandating an invasive procedure in order to give informed consent is not a proper role for the state," McDonnell said.


"I am requesting that the General Assembly amend this bill to explicitly state that no woman in Virginia will have to undergo a transvaginal ultrasound involuntarily."


The approved legislation would require a woman to undergo a non-invasive ultrasound, and she would have the option to choose or decline a more invasive probe if deemed necessary by a doctor. Under the original bill, a woman would have been compelled to have the more invasive probe.
After the governor's about-face, Democrats on the House floor sought to build on the momentum by calling for the bill to be killed entirely. (Abort the abortion laws!)
"You're mandating not only a completely unnecessary procedure, but a useless one," Democratic Delegate Jennifer McClellan said.
Six other states require mandatory ultrasound prior to abortion, most of those states allow women to decline to view the image, Texas, Oklahoma and North Carolina require women to hear the provider's verbal description of the ultrasound.

Democratic Delegate David Toscano said: "We need to be spending a bit of time on this bill."

"We shouldn't be playing doctor on the House floor."
No, they should not.

this gyne is feeling much misein for GOP attempts to shove their smaller govt into my personal space!

their big picture goal is to reverse Roe v. Wade-- but they are selling it as "informed consent".
Right, because when a woman has gone to the doctor for an abortion, she needs an ultrasound photo to confirm she's pregnant?