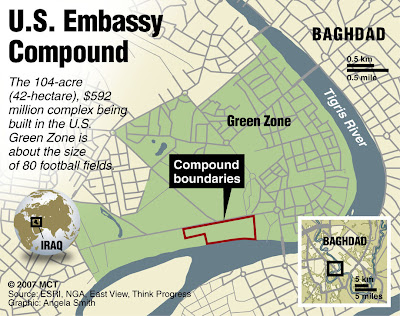 In yet another blunder from G.W. Bush, the monstrosity known as the U.S. Embassy in Iraq is now another fail on the decider's resume.
First off, the price tag $592 million, listed in the diagram is wrong. That actually wound up being $750 million. Ooops!

(NEWSER) – The United States' hulking $750 million Baghdad embassy is home to 16,000 staff and carries a $6 billion price tag annually—and it's about to get slashed in half in the wake of US troops' departure, reports the New York Times. It's quite the about-face for the State Department, which recently spent a year planning a buildup that has given it a diplomatic presence larger than any in the world. 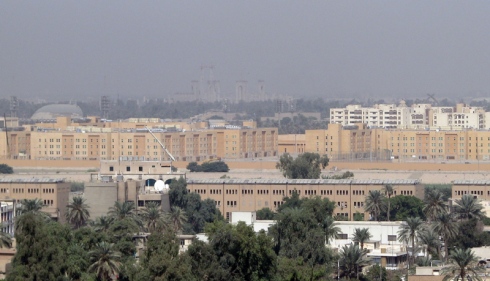 Looks like the Bush administration "misoverestimated" the love of the great American liberators, deliverers of Democracy thing. This behemoth compound is bigger than the Vatican, and houses 16,000 people. Problem is, the happy liberation, embrace democracy scenario did not happen, and Iraq remains too dangerous to really go outside the walls. Besides that blunder, the $6 BILLION annual operating cost is a hefty ongoing price tag.

Who could have guessed this supersized, world's largest embassy would wind up being a vulnerable target in a hostile environment, that is too costly to maintain ? 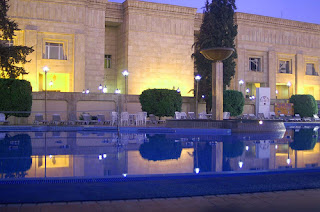 Perhaps the fact the compound has it's own water and electrical systems, and the locals dealt with either none, or sporadic basic services would  yield a clue.

Summer temps can exceed 120º in the shade, so having electricity and water are lifelines.
The "in your face" U.S. Embassy with 24/7 power and water must have added insult to injury. Not only were locals living in war zones w troops and violence all around, but observed the mega Embassy
living in luxury.


Iraq, the Times notes, never sought such a large diplomatic presence, and views the Americans with suspicion even as it flexes its own nascent governmental muscle. “The US had something on their mind when they made it so big," says one Iraqi lawmaker. "Perhaps they want to run the Middle East from Iraq, and their embassy will be a base for them here." To make the cuts, an embassy spokesman says the US is scaling back "the number of contractors needed to support the embassy's operations," and "hiring Iraqi staff and sourcing more goods and services to the local economy."


I think that Iraqi lawmaker got it right. The Bush administration really did think they were getting a foothold to the oil Middle East. Instead, we are deeply in debt, and left Iraq in a shambles. Now we own a gargantuan embassy that reflects our whole approach to Iraq: overdone.