The Superbowl- of injures 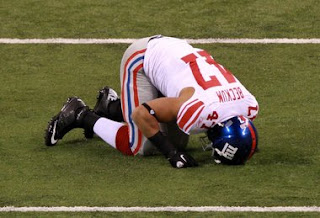 This post may be considered sacrilegious-- saying something negative about the all importantly hyped, most viewed sports event in America- the Superbowl. Admittedly we never even watched any other of the pro football games, including the playoffs to the Superbowl. But almost as obligatory tradition, we made some fresh guacamole dip, accompanied by a bowl of chips, and sat down to enjoy the spectacle.
I want to talk about the injuries. You know, when someone is down on the field, and they cut away to commercial.
Speaking of commercials, I thought the Chevy apocalypse commercial, where "Dave did not make it" (implied death) because he was driving a Ford, basically ruined what might have otherwise been a funny spoof on the Mayan calendar apocalypse. Besides, if you survived an apocalypse, would you then be eating Twinkies?

But I digress, before the game ever even started, the injury lineup was long:

It's more like the walking wounded, night of the living dead. Yet they tend to tape 'em up, and get 'em out there. For the win.


“The Super Bowl (victory) is good medicine for the injury,” Ballard said.
That's "game day" talk. When these guys have to go through surgery and many months of painful recovery, they might have other words in mind. Besides the fact it can be "game over" for their pro football careers, it could result in serious lifelong health problems.

For all the high tech, razzle dazzle these games put out, I thought this was a stunner:

Ballard, who felt like he made the injury worse by testing it on the sideline — even though he realized the same thing would’ve happened in the game — was sitting in the training room for much of the second half.

“No TV, no phone, no nothing,” he said. “All I could hear were cheers, so I had one of the doctors run out there and he came back in going nuts, so I knew we scored (the winning touchdown).”
Wasn't Verizon a major sponsor of the game? They could not make at least some 4G magic available on a Smart phone for the wounded to watch the game while on a gurney in the training room?

Ballard is unsure if he’ll need surgery. Beckum definitely will.
The Patriots Rob Gronkowski came into the game w a high ankle sprain.
Even their QB Brady looked like he could use some first aid action for a bad shoulder.
The injuries don't end there. 13 people were injured in a pre game night concert where record crowds for a LMFAO concert became a crush. 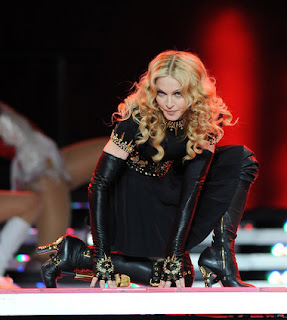 And there's more- 53 year old Madonna pulled a hamstring in her halftime show practice, and bonked her nose. She was able to pull off the show and wear ridiculous high heel boots while dancing.
There is another long term injury story we'll hear about down the road- stiletto heel syndrome.


Times- Picayune reporter Susan Langenhenning made the comment "those boots weren't made for dancing".
"you just know she had to be  cursing those boots. At least once, she stumbled in the thigh-high heels, and her dancing was stiff, likely because she could barely bend her knees."


Well! If we really wanted to make these football games more interesting, let's see the players run around in some ladies super high heel footwear! 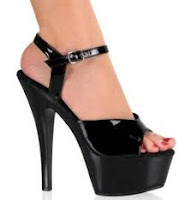 I get it that these torture devices shoes are supposed to be smokin' hot/sexy, but I find it hilarious to see women try to walk in this ridiculous footwear.
Look at the position a shoe like this puts a foot in! Ladies: Sciatica, permanently damaged Achilles tendons, bunions, hammertoes and back pain are not pretty!

But besides the entertainer & fan injuries,  back to the football injuries-Retired star running back Hall of Famer- Tony Dorsett is one of more than 300 former players suing the National Football League. He says the league pressured injured players to "get back out" on the field, causing long-term damage.

"They use you up-- it's all about winning football games. They don't care because they figure they have "replacement factories", which are colleges. "They just put you out there, and feed you to the wolves".
Dorsett suffered concussions, cracked wrist, and a broken back. The most excruciating pain you could ever imagine."


Play hurt, but you are not supposed to play injured. Coaches, trainers and team paid Doctors call the shots re injuries on the field, not independent medical assessment.

Check out this NFL Injuries spreadsheet for all NFL teams

Injury Categories
The list of injuries are long & include every body part. But of the 49 concussions,  30 were probable (virtual certainty of playing), 13 were questionable (50/50 chance of playing), 6 were not categorized.

"Bell Rung" is a documentary focused on bringing to light the long-term trauma and life-altering health issues suffered by many former professional football players. Hosted by legendary Green Bay Packers running-back Dorsey Levens, "Bell Rung" will give you insight into what life is like for many professional athletes after their glory days come to an end. Too often, even a brief career in professional football can lead to early Alzheimer’s, dementia, and debilitating brain damage following retirement. You will hear horrendous stories, from both current and former players, about the experiences they have encountered during and after their professional football careers. "Bell Rung" will uncover incredible accounts revealed by some of the game’s most famous players. You will hear from Brett Favre, Brian Westbrook, Antonio Freeman, and others about the effects playing pro football can have on someone.

Ok, I made my point. You can't say no foul no harm, when you realize these young athletes in their prime, lured by the fame and fortune of the NFL, may learn the dark side of the sport, the hard way.

I didn't watch the game but then I never do. I think it is a shame that these guys are basically beating each other up--I guess it's a more civilized Roman Colosseum of sorts.

And I would never wear high heels like that. I have one pair of boots with a moderate heel and they are the least favorite of my footwear and rarely worn.

Madonna needs a root job, per Sparkle Pony. Actually, I guess the need for a root job is sexy to guys...

I predicted the Patriots by 10.

A touchdown and a field goal. I think injuries played a role for the Pats weak performance but Eli and the Giants just opened a big can of whup ass on New England.

Oh well. There's always the 2012 season to settle the score.

Life: There's a reason other countries play Rugby or football is soccer, it calls for more finesse and less bone crunching.
I changed the 2nd vid after you posted.

The Bell Rung Documentary talks about concussions and how each concussion rattles different parts of the brain... so going unconscious is not the only indicator of a serious concussion.

Anyway, those high heels are both uncomfortable and dangerous. I have zero pairs of them in my footwear collection,


Lulu: One person commented to have a 53 year old dance as she did is like having your grandmother flirt with the poolboy. Well hey! At least she's up & doing her art. I can't help but notice all the male dancers wore gym shoes.

Christopher- That's my point though, they cut away to commercial as they remove player after injured player. The Vets of the game are left with their bodies seriously damaged- and it does not take long to become a veteran NFL player.