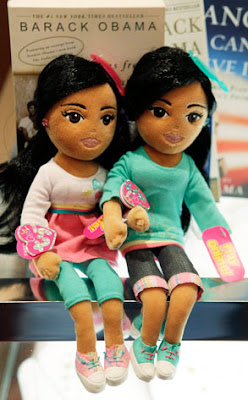 " Sasha, 7, and Malia, 10, are our nation's new first daughters and they are both, well, sweet and marvelous.
"They're such adorable girls. How can we resist?" Ty spokeswoman Tania Lundeen told the Chicago Sun-Times. But Lundeen also insists the $10 dolls are not replicas of the Obama girls. And this fact must make it much worse- We do, too, but we're a little concerned with the company the plush Sasha and Malia are keeping. The TyGirlz Collection also includes Bubbly Britney, Lucky Lindsay and Precious Paris." E! Online reports.

Michelle Obama is reported to be none too happy, responding through her spokesperson, that her kids are "private citizens".

If the Obamas were going to agree to licensing & merchandising for their kids images you'd think the kids would at least get colllege fund money out of the deal.
Ty is skirting the line by saying they just randomly picked the names, and they are meant not to represent the first kids.

Oh Please! That is a cheap shot of Ty to do this without permission, and then insult our intelligence by saying the doll name choices are just a coincidence? On the week of the inauguration, no less.

Others critique the dolls have breasts, and are made "less black" in their features.

I would think since both Obama's are lawyers, they might shut this folly down, on image copyright laws.
If that is the case, it would make the dolls even more rare & a collectors item.

Seriously though-- who would want your kids to be in a category that includes Bubbly Britney, Lucky Lindsay and Precious Paris??

That's America - land of exploiters and con men. The land which people, when polled, declare its highest purpose is to "Make Them Rich." As proof, that's all I've seen lately...

I agree with you Fran... I didn't think it was right when I first heard it..and when I read Michelle wasn't happy, I thought that I bet she wasn't...Her and Barack have been so careful about keeping the girls in the background and keeping them grounded this is not something they would want.
It's just rude of TY to assume this would be ok, without asking for permission first.

That's terrible, I hope they get them taken off the market. That is so rude.

Plus the dolls don't even look like them! It's like TY just grabbed some generic dolls off the shelf & named them Sasha & Malea. No permission is a biggie when it comes to selling images for profit. Sometimes a mfr can hide behind the celebrities-are-public precedent, but these girls are not celebrities. If I was TY, I'd be quivering in my boots about facing Michelle in a lawsuit!

Very odd. In they look more like voodoo dolls.

Annette: Not only wrong, but maybe illegal?

Maui~ Sounds like you are not buying the company line- the random choice of those names, not representative of the actual Obama kids?
We should believe this too when they roll out the Barack, Michelle & Grandma dolls too???

DK~ In a sense I hope they do shut the down, just to set precedent to put the kabosh on this kind of stuff getting out of hand.