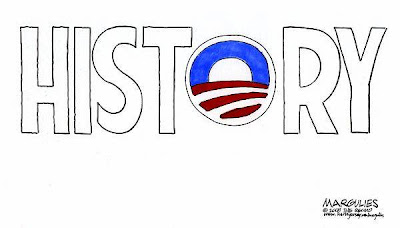 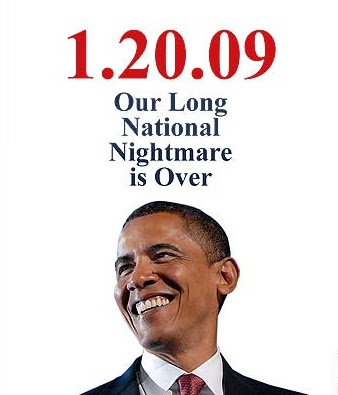 I am doing a happy dance that the old Regime is no longer, and hope is restored.
Lots of work ahead, and it won't be easy-- but for today, let's bask in this historic moment, be Joyful and HAPPY!
I wish the Obama family the very best in this journey, and that they be protected and guided by wisdom and peace.
OH HAPPY DAY!!!!

Labels: SANITY RETURNS TO THE US?

Our long, national nightmare is nearly over.

What an awesome inauguration!
A new day dawns

Thought Obama's speech about being *friends* with the world was significant and such a welcomed change.

Rev. Lowrey's Benediction was serious and ended on a high note. That part brought me to tears.

Soon I have to head off to work, but so glad to have caught this "live".... happy, beautiful, wonderful inauguration.

It really is a Happy day for our Country & the World.

the helicopter is hauling off the shrub as I write.

I loved the crowd.

Watched it all day, everything, even the whole damn parade! Guess I was wound up tighter than I knew. Now I can finally sleep, maybe for the first sound sleep in 8-yrs. We finally have a real president!

Christopher, the LGBA marchers in the parade R.O.C.K.E.D!!!! Of course, I also liked the Green Valley band from Henderson NV, playing Viva Las Vegas! The ARREST BUSH signs were much appreciated, too.

DK~ Funny you watched the whole parade. They had it broadcast @ work on a large screen, so people could go there during breaks.

I did not start till 10:30 pst, so I watches the whole heart of the inauguration, and the earlier stuff.
By the time I went to work , we O-fficially had a new president & they had hauled off the shrub....

I did not catch much of the parade, went to a party that showed the swearing in so that was fun.
People who are not usually rah rah patriotic, were now feeling like they can relate to their country & feel proud.

That is a big deal.

The speeches are about healing & fixing the brokenness.