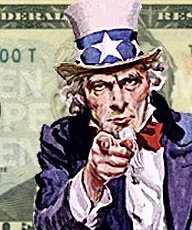 I just sent Obama an e mail. I do appreciate the pay freeze he enacted at the highest level of his administration- that is a good start.
But I don't want the Congressional pay raise, the automated raise to slip by.
My suggestion to Obama is to publicly announce the automated raise. Publicly call for voluntary refusal of the raise & publish the list of congress members willing to give back the money.
2010 IS an election year. The list could be very handy for voters.
The automatic raise just quietly goes through in the beginning of the year, during the holidays. Unless congress itself decides to take an up or down vote on it, it is automatically approved.  I would like that clause to be removed and or amended.
Tie it to minimum wage hikes, and overall financial health of the treasury.
Bad economy, no raises.
We are on the verge of a full blown depression, so these raises, over 2 million dollars are really inappropriate. Especially in the case of Pelosi, Cheney, & Justice Roberts, who can't even get a few lines of the swearing in done properly.
I can't let this go, because Congress already makes huge salaries along with deluxe health care, benefits & retirement programs.
If we the people don't make a fuss about it, there goes another $2 million down the drain. We really do have to tighten our belts & function differently.
ALL of us, government included.

With the Federal minimum wage increase accomplished last year (first time in 10 YEARS), House Democratic leaders joined with their Republican counterparts to oppose a procedural vote to bring the COLA issue to the floor, leaving the way clear for their automatic raise.

Rep. Jim Matheson, D-Utah, a leading critic of the COLA process, said in an interview that he's not proposing that members of Congress never get a pay raise. But he said that, in a time of budget deficits when many people are undergoing economic hardships, "at least we ought to have an up-and-down vote on it. The whole process appears so secretive."

Tom Schantz, president of Citizens Against Government Waste, said Congress should be "mortified" to accept a raise when it allowed the deficit to swell and the economy to swing so badly out of control.

"If congressional leaders believe that the taxpayers should give pay raises to this rogues' gallery of ineptitude and venality, they ought to step away from the spiked eggnog," Schantz said, urging an emergency vote against the raise.
That is exactly what should happen- an emergency vote, stopping the raise. Or a public roll call for giving the raise back.
We can't proceed with business as usual. The notion of this glut of hefty pay raises is in one word, insane.
Ordinary citizens had to wait 10 YEARS for a small minimum wage hike ~ even then is is miniscule, compared to the actual cost of living.
Posted by Fran at 8:59 AM

Labels: $2.2 million in congressional pay raises in a depression

Pay scaled with Performance? What a novel concept.
I hope that works out better than the current CEO/corporate raider scenario.

Actually I am not sure the Judges got their raise...it was supposed to be included with the Auto loan package and congress didn't pass it.. so they didn't get the COLA passed...I don't know if it ever did get voted on and passed or not.. It may have and I missed it. Congress made sure they passed their own, but like I said they didn't pass the judges..unless they did it in another bill.

But I like your idea..my mother said the same thing...lol

I'm pretty proud of Matheson for saying that. He's UT's only national level dem, even if he is considered a Blue Dog Dem.

I hate the way congress always sneaks their raises through, wording it so that if they don't vote, it automatically kicks in. They think it lets 'em off the hook? Like we are too stupid to notice the bottom line?

I agree, pay freezes for public employees. They can wait until the economy recovers just like the rest of us.

ps, is that your new avatar? going for the masonic eye thingie?

Dr K: For me it is a matter of principle. States are overwhelmed with unemployment, highest food stamp need, and draining the coffers of funds, on the brink of bankruptcy... they need to be in tune, and make the personal "sacrifice" to take less pay. Can they make do with $165,200 plus benefits?
If not, then maybe they need to step down.

Annette- I understand they did not vote for it, so it automatically goes through.

Come on, that is a hefty raise in hard times.

DK ~ I am playing with a new avatar, not sure what I will wind up with. Do you ike the eye mandala or does it creep you out?
Much like government employees being out of touch with reality?

Or it could be feathers....

You have an opinion? It's such an important matter!
LOL
New Year, New REgime, New Avatar.... cheap thrills.

Fran, it is your personal choice, whatever you like. I always get weird about the eye thing, but that is just me. I like the colors in the feather one. But it's YOUR expression of yourself, so go wild, baby!

OK feathers it is. I like to change things around, keep it fresh.