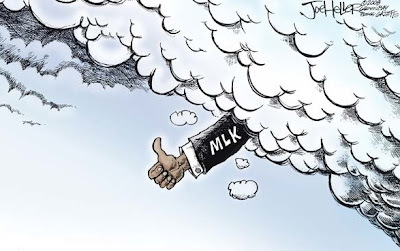 I was thinking about MLK jr. and his incredible endurance. Who among us would continue with a movement after having attack dogs, fire hoses, nightsticks, tear gas, bricks through the window, and dynamite tossed at our homes? Doing jail time became a home away from home. I can't help but connect this song with that Man ~ Amazing Grace.


Mahalia Jackson (Ignore the big hair~ This woman can sing!!!)

My admiration and heartfelt appreciation for MLK & his family's sacrifices to carry on the Civil Rights movement are deep. Really, that admiration spills over to all the unsung heros who participated in the Civil Rights movement. The courage and stamina it took to continue through such unimaginable obstacles
MLK is one of those rare visionaries, who would not give up, or give in to anything less than equal rights, while insisting upon non violence as absolutely being the way. Enough of my words~ speaking and inspiring was his gift- here are some MLK jr. quotes:

The tough mind is sharp and penetrating, breaking through the crust of legends and myths and sifting the true from the false. The tough-minded individual is astute and discerning. He has a strong austere quality that makes for firmness of purpose and solidness of commitment.
Who doubts that this toughness is one of man's greatest needs? Rarely do we find men who willingly engage in hard, solid thinking. There is an almost universal quest for easy answers and half-baked solutions. Nothing pains some people more than having to think. 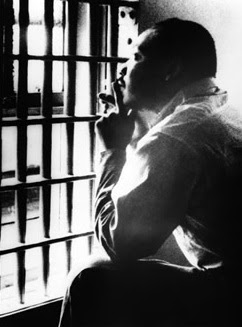 Returning hate for hate multiplies hate, adding deeper darkness to a night already devoid of stars. Darkness cannot drive out darkness: only light can do that. Hate cannot drive out hate: only love can do that. Hate multiplies hate, violence multiplies violence, and toughness multiplies toughness in a descending spiral of destruction. So when Jesus says "Love your enemies," he is setting forth a profound and ultimately inescapable admonition. ... The chain reaction of evil — hate begetting hate, wars producing more wars — must be broken, or we shall be plunged into the dark abyss of annihilation. 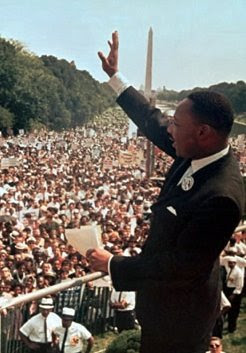 When the architects of our republic wrote the magnificent words of the Constitution and the Declaration of Independence, they were signing a promissory note to which every American was to fall heir.
This note was a promise that all men, yes black men as well as white men, would be guaranteed the inalienable rights of life, liberty, and the pursuit of happiness. It is obvious today that America has defaulted on this promissory note insofar as her citizens of color are concerned. Instead of honoring this sacred obligation, America has given the Negro people a bad check, a check which has come back marked "insufficient funds." But we refuse to believe that the bank of justice is bankrupt. We refuse to believe that there are insufficient funds in the great vaults of opportunity of this nation.

"Nonviolence is the answer to the crucial political and moral questions of our time — the need for mankind to overcome oppression and violence without resorting to violence and oppression. Civilization and violence are antithetical concepts… Sooner or later all the people of the world will have to discover a way to live together in peace, and thereby transform this pending cosmic elegy into a creative psalm of brotherhood. If this is to be achieved, man must evolve for all human conflict a method which rejects revenge, aggression and retaliation. The foundation of such a method is love.

I refuse to accept the cynical notion that nation after nation must spiral down a militaristic stairway into the hell of thermonuclear destruction. I believe that unarmed truth and unconditional love will have the final word in reality. This is why right, temporarily defeated, is stronger than evil triumphant.

I accept this award in the spirit of a curator of some precious heirloom which he holds in trust for its true owners — all those to whom beauty is truth and truth beauty — and in whose eyes the beauty of genuine brotherhood and peace is more precious than diamonds or silver or gold."

Martin Luther King jr. would be pleased with the knowledge that a black family would soon be living in the White House. That our nation has come far enough to recognize the content of Obama's character, rather than the color of his skin. That a majority of US Citizens would see fit to elect a black man to be our President. It is my hope that Barack Obama would embrace the MLK jr doctrine of nonviolence. MLK's conviction that war is not a solution, nor will it resolve anything. I hope that light and wisdom are what guide his leadership. It seems obvious to me that we must learn from history. That the time for peace is now, and continue Martin Luther King jr.'s life work, with a new vision and determination.

*** SPECIAL FOOTNOTE, AS A REVEREND, DR. KING WOULD PROBABLY NOT APPRECIATE CENSORSHIP OF PRAYERS, FOR WHATEVER REASON, REV. GENE ROBINSON'S INVOCATION FOR THE INAUGURAL KICK OFF WAS NOT BROADCAST.
PLEASE TAKE A MOMENT TO READ THE SPECIAL PRAYER HE WROTE FOR THE OCCASION. POSTED BELOW.

Mahalia Jackson was a major musical influence on Aretha Franklin.

When you are going to be influenced, look to the best!

Mahalia sure has soul in her singing. I did not know of her connection to Aretha, but it makes sense.

I found quotes emphasizing Dr. King's strong stance & world view on non violence, because just as Mahalia influenced Aretha, I hope Dr. King influences Obama.
I still hear him saying his intent is to escalate war in Afghanistan. Not wise, as we can ill afford it, and not wise to make such announcements publicly.

Better we withdraw (we've already had 6 years to install democracy or win or whatever the goal was--and the mission remains unaccomplished.
Better to spend that $$ on programs that help the People of Afghanistan, with necessary peacekeeping and programs that end poverty.

We don't need more war & suffering, we need to break the cycle.

I think most gay men believe they can sing like Aretha. It's a riot. If you go to hear Aretha live, the front rows always have tons of gay men.

I'm not a religious person but this Gospel singing is simply stunning. Athletic. How can the human voice do this? I hear Mahalia in Miss Ree's singing.