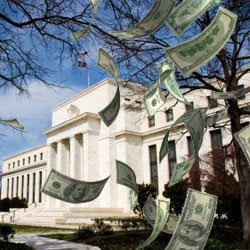 MIllions without health care. Rampant foreclosures. Highest unemployment rate since the depression.
Now would be a good time for the Federal government to give itself a big fat raise?
In the surreal world of the US Federal Government, that is just what is happening,

The home has an estimated annual tax bill of about $44,000.
Not to worry, George & Laura can probably get by on the family oil revenues.


Last year was the first since 1999, when the pay was $136,700, that members of Congress did not receive a cost-of-living allowance raise along with other federal employees. Democrats, newly elected to the majority, had vowed to block an increase in their paychecks until Congress raised the minimum wage.

With the minimum wage increase accomplished last year, House Democratic leaders joined with their Republican counterparts to oppose a procedural vote to bring the COLA issue to the floor, leaving the way clear for their automatic raise.

Rep. Jim Matheson, D-Utah, a leading critic of the COLA process, said in an interview that he's not proposing that members of Congress never get a pay raise. But he said that, in a time of budget deficits when many people are undergoing economic hardships, "at least we ought to have an up-and-down vote on it. The whole process appears so secretive."

Tom Schantz, president of Citizens Against Government Waste, said Congress should be "mortified" to accept a raise when it allowed the deficit to swell and the economy to swing so badly out of control.

"If congressional leaders believe that the taxpayers should give pay raises to this rogues' gallery of ineptitude and venality, they ought to step away from the spiked eggnog," Schantz said, urging an emergency vote against the raise.

That is exactly what should happen- an emergency vote, stopping the raise.
Not only did lame congress allow $700 billion to be recklessly squandered  to Wall Street financiers, but they seem to be oblivious to the overall financial ruin that they themselves had a major hand in creating. Repeated funding for the illegal occupation, and failure to regulate banks and Wall Street created this mess. We do need to find out what circumstances created this disaster, in order to not have it repeated, but moving forward, we can't proceed with business as usual. The notion of this glut of hefty pay raises is in one word, insane.
Ordinary citizens had to wait 10 YEARS for a small minimum wage hike, Congress & the Federal Government should at least do the same.
I for one, am mad as hell & don't think we should allow the pay raises.
Posted by Fran at 8:31 AM

fuck em...they do NOT deserve a damn raise...and SOME frankly should be fired or docked for pay.....

Congress getting a raise (spineless) is bad enough-- but Pelosi & Cheney???

You have GOT to be kidding!!!

They deserve to go through trials for obstruction of justice.

Make all the bastards get out of the marble halls & go live in a tent city for at least a month.

This is just the pits.

It's called Cost of Living Adjustment. COLA...it is in all federal money. SS anything or anyone who is paid through or by the federal government gets it.

They call it COLA,

I call it bullshit.
Where does Federal money come from???
We the people.

Have they earned this pay raise?

Can we the people afford it?

They had the ability to vote on it, and instead let it automatically go forward.

It is wrong.
It is not deserved.
It shows how out of touch Congress & the Federal Guvmnt are.

Food banks are hurting.
SEnior facilities doing elder care are going bankrupt.
Veterans are not getting proper care.
We are $10.6 TRILLION dollars in debt.

Not one penny of a raise should be given.

If anyone on Capitol Hill is less deserving of a raise, it's Nancy "$35 million million dollar" Pelosi.

Her idea of leadership included refusing to impeach Bush for lying the country into war and abusing the Bill of Rights and the Constitution.

These COLAs are an outrage but my prediction is, nothing will change.

One of the reasons people become members of Congress is the coin.