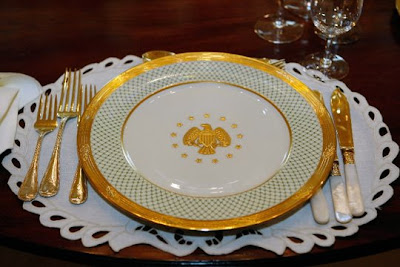 Seriously~ We are talking about the subject of the White House fine china, and the "spins" they have taken. Enigma @ Watergate Summer posted about Laura Bush- how she had been working on ordering new china dishes for the White House. 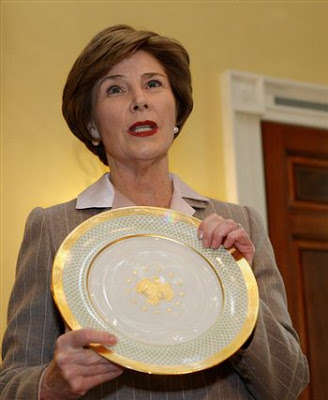 She is seen with this deer-in-the-headlights look displaying the gaudy pattern she had chosen.  Yes Laura, the country really cares about your fine china choices, it's been on all our minds of late.
The $493,000 set was paid for by a privately funded trust of the White House Historical Association, which also purchased a second, less formal set.

Laura "hopes that the next family, and I know they will be happy to have these two sets, as well, to be able to entertain their heads of state that come in, as well as for their closest family and friends," she said in the White House Family Dining Room.

Laura Bush said she commissioned the dinnerware because of breakage and a need for more settings for larger events, and added a second Magnolia-patterned set for $74,000 for use at private family dinners and smaller events. 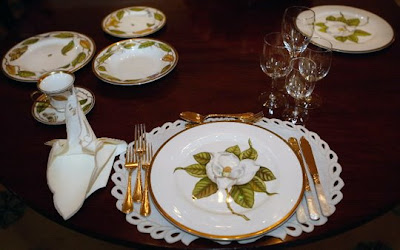 "She said she was aware of criticism her predecessors received for buying expensive china, but said it was paid for with private money and that when the process started, "the economy was a lot better than it is today."

Laura saw to it the spendy set was made by U.S. companies Lenox Inc., and Pickard China to produce the plates, although some design work was done in Hungary for artist Anna Weatherley, who created the magnolia set inspired by the trees on the White House lawn.

I'm sorry but the golden eagle motif, I've dubbed the pattern name "Oblivious", is really not befitting the Bush family persona.
The following styles are suggestions I've complied- I only wish Laura would have consulted me first, I could have saved a bundle and more closely captured the Bush ambiance.

While we are dishing about the White House, Bush denied the Obama's access to the Blair house.. the White House guest house that has 118 rooms, and is fully secure, while there is one guest staying there, showing just how shallow their Welcome to the Obama's really was, The Obama's have two kids who needed to start school on the 5th. So the Obama's are staying in a hotel, now costing taxpayers a fortune for security, because the Bush family did not offer the grace, offered to them in their transition.

So wlll the Obama's be dining off the new Bush plates for the premier inaugural luncheon?
Nope. Just as Obama chose to use the Lincoln bible for swearing in, they will be using the Lincoln china. 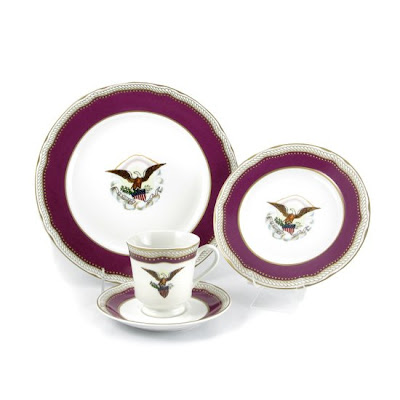 Click here, If you want to take a glimpse of other presidential china. A hat tip to DK at Redheaded Wisdom, she ran with this dish chat concept, but is immersed in taxes, so I hope I did justice to this topic.


There you have it folks. The country is in ruins, we are immersed in a $700 billion dollar bailout, banks are failing, the housing market is in dire straits, 2.6 million total jobs lost in 2008 -- as unemployment jumped to 7.2%. George buys a $2.1 million dollar mansion, and Laura spends $567,000 on fine china. Could these people be more out of touch?

Send Bush to jail for war crimes, make him sell all his properties for restitution, and put the gaudy dishes for sale on e bay.
Or- better yet- set up a booth like this. People would pay good money for this kind of stress relief. Next best thing to shoes??

Visit msnbc.com for Breaking News, World News, and News about the Economy

This was fun, Fran!

Once they found out they couldn't get their garish china until right before exiting the WH, why on earth didn't the Bushes just stop the whole deal? Why saddle the next few presidents with your own, ahem, "style"? I'm surprised they didn't have golf clubs & brush-clearing chainsaws painted on the "informal set".

And "private funds" ... excuse me while I get sick on those magnolia plates. Money that gets funnled into private trusts is money that is not available for other worthwhile projects. But I guess it makes the Bushes feel fiscally responsible to act like it didn't cost US anything.

I rather like the "Crow" plates! It's what they deserve a heaping helping of. The fuzzy math plate looks kind of like what Zachary Taylor was trying for, ahead of his time. Most of the historical presidential china is beyond hideous, but I have to admit, the Lincoln set is growing on me.

I was just viewing the other sections of that website: the WH residence, East Wing, West Wing. Great historical photos. I didn't recall that Jimmy Carter had installed solar panels on the roof of the west wing in 1979! Here we are 30-yrs later, and finally FINALLY ready to inaugurate a president that is interested in a national alternative energy focus. Go get 'em, O!

Maybe we could grind up those bush plates and make the Bushes walk across them barefoot as they whirl away from the WH ... a bizarre homeland security trap to check for any stolen "W"s in their shoes. oops, my bitterness may be showing.

How ironic that the only thing in this country that isn't produced in China is... china.

Did you notice that the most prominent detail missing from the Lincoln china is the excess of gold leaf? I suppose the lust for Au hadn't yet consumed the Lincoln administration.

So, Laura, will it buy back your soul?

Well if it was private money that paid for the junk let her and shrub take it to BigD with them. That way we won't have to deal with it in the White House forever. I can't see the Obama's using it anyway...for fear the girls and their friends breaking it. Well then again...maybe they will let them play with it to get rid of it...lol
I am into simple as I pointed out at E4E so I like the Lincoln set better than most of them I saw... and for sure better than the god awful thing laura picked out.

DK~ Other presidents at least have the excuse of the era in which they lived, that was the style of their time.
The Bush's have no excuse- just bad/gaudy taste.

Much of the presidential china historically has an Eagle motif--Bush is a "Crow amongst Eagles." maybe even more of a Vulture- but nobody had Vulture design plates.(This is why custom designs are necessary???)

The casual plates might have had a rendition of "my pet goat" or just like they have those stupid backdrops repeating the same words, they may have emblazoned "Mission Accomplished" or "Stay the Course"?

I still like the idea of having kids in the poorest schools for a gourmet lunch & give them each a full place setting as a souvenir to keep. Put one set in the commemorative china display, & get rid of the rest. Least dignitaries be choking on their meals!

Besides, the Obamas will be too busy digging out of the Bush mess to be hosting fancy dinners.

Notice Laura made sure their plates had the largest settings above all the others. She wanted to make sure HER set gets used.

Annette~ It is the LEGACY to leave behind. Besides, I'd rathe see it given away then let them have it.
They have stolen enough from this country.

Let the kids use it, and let them know it is OK to break.

Too bad they can;t set up a pay for use dish smashing booth @ the inauguration. People would gladly pay to smash a Bush dish & that could raise enough money to get a decent set, circa the 21st century.

But wait! Even Congress is on board with the dish smashing concept:

Even into the 20th century, White House china was often given away if it was chipped or broken. Later, Congress passed a law that required that all presidential china be kept or destroyed. When new dessert plates for the Johnson administration turned out badly, the White House staff smashed it against a basement wall painted with caricatures of the president's assistants.

All they have to do is declare the Bush (Administration) plates turned out badly & have a smash fest in the basement??? White House staffers get to have all the fun!

great post....I love the dishes you found- especially the Lemons...I will link up to it from Watergate....

( and yeah throwing shoes or dishes...all of it would feel good...)

Ahh well this was fun. I would not blame the Obamas if they choose to never use the Bush plates- ever.

Well you know the Bush plates did turn out badly. Not only are they ugly, but they stand ready to remind everyone about the plateful of steaming lies we've been fed for 8-yrs.

I like what the WH staff did with the Johnson plates, hurling them at images of obviously hated LBJ assistants. Take that, General Curtis LeMay! Bam! Oh too bad, he was already insane, without benefit of a ton china being flung at his head.